Above: DLNR nominee Carleton Ching addresses reporters in the executive chambers after his nomination was withdrawn by Governor David Ige (left). | Will Caron

Over an hour before the Hawaii State Senate was scheduled to meet and vote on Governor David Ige’s nomination of career developer-lobbyist (and a very honest, humble man by many an account) Carleton Ching to head the state’s Department of Land and Natural Resources (DLNR), opposition members, who had been making last minute phone calls and morning office visits and tallying up their best guesses at senate votes, were whispering that they were fairly confident that they had the senate votes to reject the nomination.

Conscious of the fact that there would be enthusiasm among gallery attendants in-the-know, Marti Townsend, of the Outdoor Circle, gathered opposition members together before the Sergeants-at-Arms opened the doors to remind people to keep their cool and be respectful in the gallery. Once inside, I quickly realized Mr. Ching was not there, though his family was.

As the crowd—many of which wore bright red—sat waiting on their wooden benches, eager to see which senators would vote “yes,” and which would vote “no,” the elected officials tasked with approving the executive head of a department and legislative head of two vitally important resource boards that function within it went into caucus (except for lone republican senator Sam Slom, who later commented that he was, “not invited.”).

But shortly after the senators returned to join Mr. Slom, the Ching family—who had stood by Mr. Ching throughout two hard days of committee grilling—left the gallery. At this point, it seemed like a matter of time before the governor would withdraw the nomination. As if on cue, Ige Administration Chief of Staff Mike McCartney appeared on the Senate floor with a piece of paper which he handed to the Senate’s clerk.

The governor had withdrawn the nomination. 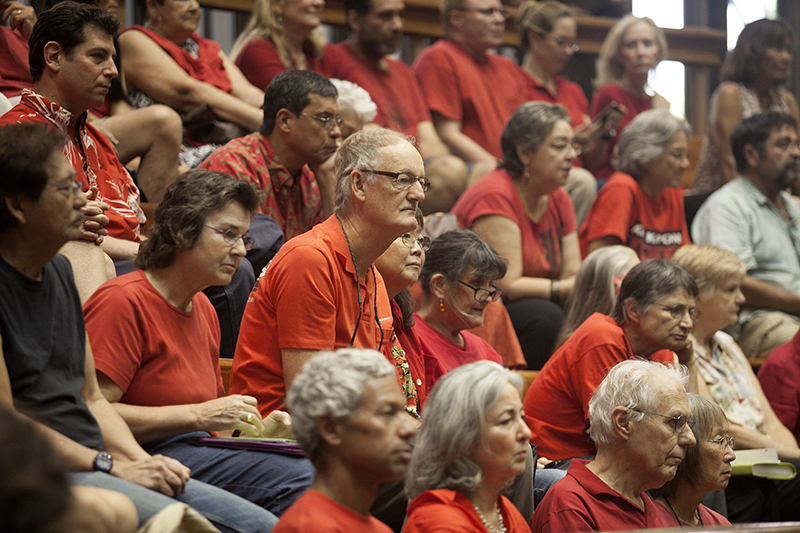 The opposition to Ching’s nomination filled roughly half the gallery and wore red as their symbolic color. | Will Caron

Mild applause, a collective exhale and smiles from the red-clad opposition. As it turns out, the governor, who addressed journalists in the executive chambers later that afternoon, wore a bright red aloha shirt himself. Here is the entire conference, courtesy of H. Doug Matsuoka:

I only mention the color of the governor’s shirt because his withdrawal of this nomination is being heralded as a victory as much for the democratic process as for the environment. I overheard one opposition member kid that the governor had worn red on purpose because it meant he had finally realized the extent of his mistake; the nomination has alienated many of his voters—and not just the environmental base.

In a cynical age in which a paltry 36.4 percent of the voting-eligible population in America cast ballots last year (the lowest since World War II—a time in which, in any given year, roughly eight percent of eligible male voters were serving in the United States armed services), this was a demonstrable instance of populist opposition succeeding in blocking an entirely inappropriate, pro-corporatism appointment to an incredibly important resource-conservation position.

Just as a reminder, the opposition to Mr. Ching’s nomination was comprised of more than 20 environmental, good government and historic preservation organizations, more than 7,000 citizen petition signatures—enough to get a name on a senatorial ballot from any district in Hawaii—close to 1,000 pieces of written testimony compared to roughly 100 in support, the recently retired and highly respected head of DLNR’s Division of Conservation and Resource Enforcement, Randy Awo (who testified that employees at the DLNR who could not speak in opposition were nonetheless very worried over the nomination), numerous members of the public that sacrificed work days to participate, and numerous media outlets including our own progressive news site, our colleagues at Civil Beat, and—perhaps most telling—historically pro-business newspaper, the Star-Advertiser. 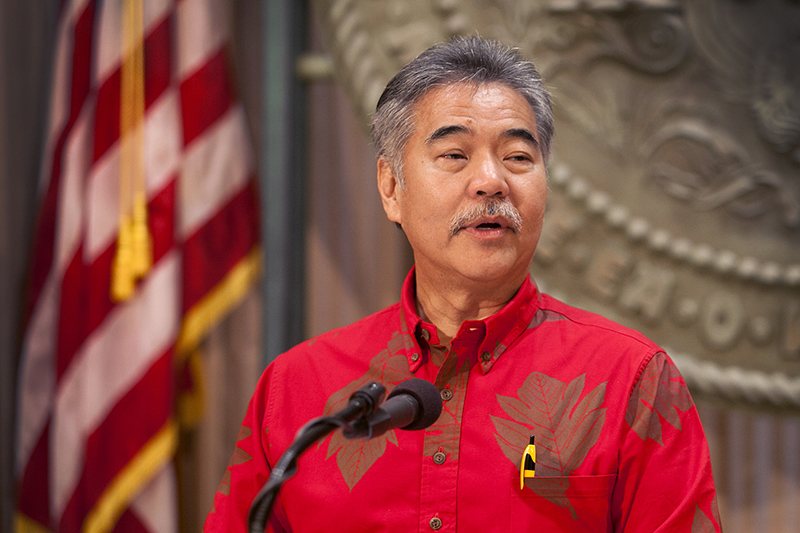 The governor addresses reporters in his red aloha shirt. | Will Caron

And for good reason; as Townsend, environmental lawyer Bianca Isaki and I discuss on Archipelago Media’s new podcast, The Backchannel, episode 3, Mr. Ching’s constant fall-back on, “balance” between development and conservation—his insistence that we can find a “sweet spot,” and that compromise between the two sides is always the best course of action—completely ignores the fact that the state constitution sets up a hierarchy for the DLNR in which resources and Native Hawaiian cultural access and practice rights are set above anything else. (An interesting replacement I heard put forward was Nainoa Thompson, and I’m interested to hear what people think of that idea.)

Rest assured; when the “opposition” says he is unqualified, we’re talking about a wide breadth of citizens from backgrounds in law, journalism, environmental advocacy, good government and even a former DLNR chair (Senator Laura Thielen who, together with Senators Russell Ruderman and Gil Riviere, led the Water and Land committee hearing that elected to reject the nomination last week). Not to mention that Mr. Ching—honest and humble man though he is—is on paid leave for a developer (Castle & Cooke) with a dubious track record with regards to the environment and to caring for communities, and would have a revolving-door option to rejoin that company after his time at DLNR—a clear conflict of interest.

But the drawback, of course, was that we didn’t get to see which senators would vote for the nomination and which would vote against. This turned out to be an incredibly important nomination hearing, especially so early on in the governor’s term. He expended quite a bit of political capital trying to get the nomination through the senate—even after all that opposition—and he quite possibly alienated members of his own former senate team, the Chess Club, Senators Thielen and Rudderman, who so courageously stood against the nomination in hearing. More lessons to be learned by both the governor and the people can be found in this insightful list compiled by our editor, Ikaika Hussey.

Senator Les Ihara Jr., a long-time Chess Club member and a supporter of Ige’s gubernatorial campaign, has always been a good-government advocate, and he had serious conflicts with this nomination. Although he said he would support the nomination on the senate floor last week during the committee hearing, a last minute change of heart, based off of the widespread opposition among the public, helped swing the votes against the governor’s nomination, leading to its withdrawal. 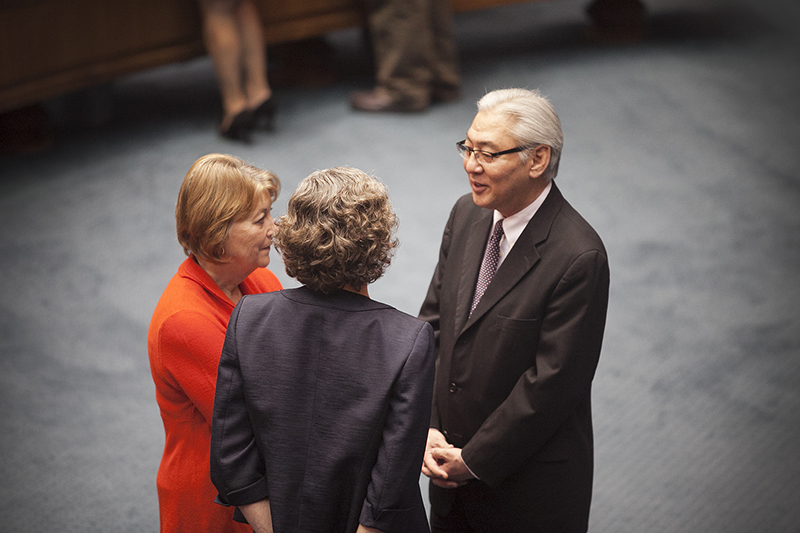 Other senators are reported to have had similar changes of heart after the public spoke up. Senator Suzanne Chun Oakland, another Chess Club member, was one of the senators that was last minute canvassed by opposition to the nominee. She was on the fence literally hours before the nomination but, despite her respect for Carleton Ching and desire to trust in the governor—a common thread among the legislators—she, likewise, changed her mind.

Conclusion:  We need to be this engaged in all things, all the time, so that government more consistently works for the people, and not special interests, be they developer or other. Perhaps Senator Rudderman said it best during the conclusion to the senate committee confirmation hearings:

I must speak out against this nomination for the harm it will do. Not just harm to the environment, but to the public trust … What do we do with 90+ percent opposition from the public? How cynical and arrogant would we be to ignore this?