The National Oceanic and Atmospheric Administration (NOAA) has dropped criminal charges it had filed against Hawaiʻi Island residents Roxane Stewart and Kealoha Pisciotta. Both women are Hawaiian cultural practitioners who were cited in 2015 for what NOAA claimed was an unpermitted “take” of the remains of a small whale the women had cared for in its final hours and later buried at sea after its death.

Given the name Wānanalua (which means “Double Prophecy”), the animal was a small, melon-headed whale found struggling offshore of Kawaihae on Hawaiʻi Island by community residents in June of 2014. The residents contacted Stewart and Pisciotta and asked them for help. Both women have cultural experience in caring for injured marine mammals, and both women are longtime members of the NOAA Volunteer Stranding Network and have worked with the University Of Hawaiʻi’s Cetacean Rehabilitation Facility in Hilo.

Working with a team of volunteers, Stewart and Pisciotta cared for the dying whale in the nearshore waters of Kawaihae. Members of the Westside Monk Seal and Cetacean Rescue team were present, and NOAA Officials were standing by on the phone. Eventually, the NOAA officials directed everyone onshore to leave. But Stewart and Pisciotta, who were in the middle of conducting a ceremony with the whale, were not notified.

Wānanalua passed on at about 1 a.m., and the two women stayed in the water with her body, protecting it from sharks through the night. In the early morning, residents returned and asked if they could help. Having had no other instructions or discussion, the women decided to return Wānanalua’s remains to the depths of the ocean, “as is done traditionally, so they can be returned to the cycle of Life,” according to Pisciotta.

Weeks afterward, Federal agents unexpectedly appeared at Stewart’s place of work, a classroom full of children in the middle of the school day, with charges of an illegal “taking,” with fines that could reach $27,000. Pisciotta received the same charge.

A lengthy administrative case ensued, under the direction of NOAA. A Federal Administrative Law Judge (ALJ) came to Hawaiʻi in August, 2016, to hear testimony over a three day period. The ALJ opined: “…I am convinced that their conduct was motivated by their deeply-held beliefs and with good intentions. I found their testimony in this regard to be exceptionally genuine and compelling, and it became abundantly clear to me that they acted as they did in order to show their reverence for Wānananlua and to comfort her in her debilitated physical condition, in a manner that was consistent with their belief systems” (IDO p. 38).

Nevertheless, the ALJ found them guilty of a “take” under the Marine Mammal Protection Act. At the same time, they did not meet the criteria for a “take,” which involves having “hurt, maimed, injured or killed” any whale, so the judge dropped the fines down to $500 each.

But the practitioners disagreed. “It wasn’t the fine,” explained Pisciotta. “It was the fact that we were being criminalized by the Federal government for practicing our religion.” Stewart and Pisciotta challenged the decision, on the basis of protecting the right to access and perform traditional indigenous cultural practices. The women asserted that NOAA needed to respect their rights to care for animals that native Hawaiians have had “familial” relationships with for centuries. “We have a right to continue to have a relationship with our ocean ʻohana—our Kanaloa,” said Pisciotta.

As a last resort, they petitioned the secretary of NOAA requesting relief. The NOAA secretary found in their favor and remanded the case back to the Administrative Law Judge with instructions to review both the case, as well as Stewart’s and Pisciotta’s rights, under the Hawaiʻi Admissions Act. Gary Zamber, counsel for Pisciotta and Stewart, pointed out that the Admission Act states that all land in Hawaiʻi (including submerged lands) is held in trust for “...the betterment of the conditions of Native Hawaiians,” and that, according to their religious rights under the U.S. Constitution and under the Religious Freedom Restoration Act (RFRA), “their actions were already protected in many ways.” 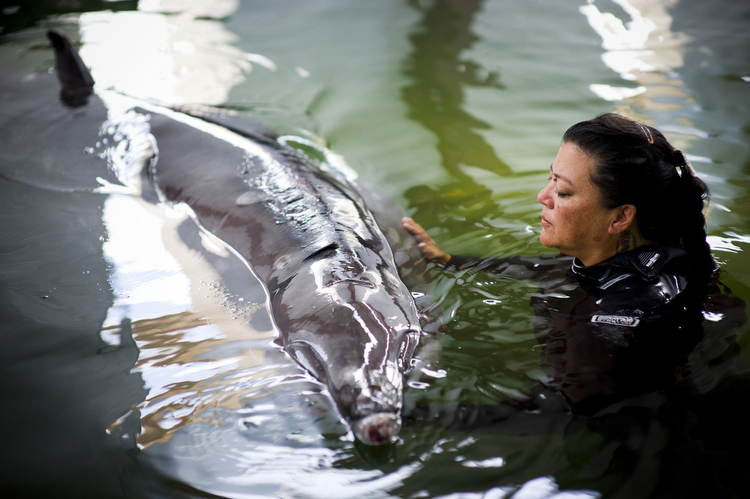 On July 17, the Federal ALJ confirmed that NOAA had decided to drop the case. According to Pisciotta, though, the matter is far from resolved. “All that has happened is that we have been dragged through the mud. If they didn’t have a case, why were they prosecuting us?”

Stewart, who had been confronted at her workplace in front of children by armed Federal agents, expressed her feelings adamantly: “The multiple injuries we and our lāhui have sustained as a result of NOAA’s arbitrary and capricious execution of flawed and fictitious policies are not at all diminished by this sudden and transparent play to sweep this erroneous criminalization under the rug. This does not absolve NOAA of owning their perpetual colonizing perspectives, the root of which is that they are the authority in all things Kanaloa. They are not by any means.”

Stewart and Pisciotta have been pointing out that contradictory Federal laws can be dangerous to indigenous practitioners, unless their rights are clearly recognized first. This applies to issues far beyond their own situation. For example, native Hawaiians are currently vulnerable to having sacred objects confiscated at the airport. Lei Niho Palaoa, the traditional whale tooth lei that is customarily passed in families over many generations, could potentially be confiscated as illegal, due to its Federal classification as “ivory.”

“Kanaka practitioners need to be exempted from these kind of Federal laws, so that we can continue our traditional practices and fulfill our familial responsibilities to our ʻohana,” said Pisciotta. “As it stands, we are vulnerable to prosecution, as this case demonstrates. We should not be adversaries with NOAA. We are trying to help, but how can we if NOAA continues to cite us?”

Stewart added, “Nor does this tactic afford the public any assurance that NOAA genuinely will change their actions in situations like ours where other Kiaʻi Kanaloa (guardians of marine animals) execute their legally protected practice.”

Ultimately, Pisciotta and Stewart said, the island-wide network of Native Hawaiians practitioners collectively known as the “Kiaʻi Kanaloa” will continue to work for the well-being of the sea. They will continue to seek out any potential manmade causes of injury to marine mammals and will continue to care for the remains of these important creatures. They feel that, at a minimum, a system of co-management should be implemented between Federal agencies like NOAA and cultural practitioners. While such a system is being developed, Pisciotta states that “the Federal government does not have a right to interfere with our genuine religious, traditional and spiritual relationships like this—it is not pono.”

“We will continue to answer the kāhea from our akua Kanaloa and from our communities who choose us as their kiaʻi,” said Stewart. “Ola i ke au a Kanaloa (life to the realms of the Sea).”