Campus speech in the age of Trump

The importance of free speech and activism on university campuses

Above: Peter Arnade speaks at a rally on campus at the University of Hawaiʻi at Mānoa in the days leading up to Inauguration Day, 2017 | Will Caron, The Hawaii Independent

“One thing you learn looking back at history, is that if people don’t assert their constitutional right to free speech, those in authority will too often be glad to scale those rights back,” said Peter Arnade, the Dean of the College of Arts & Humanities at the University of Hawaiʻi at Mānoa.

The United States has a history of free speech activism, and there’s a body of case law—Supreme Court rulings, as well as state judicial rulings on the issue of free speech—available online through institutes like the Cornell University’s law school.

“The reason why we’re talking about this now is, first, because of activism on college campuses last year that preceded the election of Donal Trump—which is part of a history of college activism that goes back to the ‘60s—but also because the president has made some very disturbing statements about speech,” said Arnade.

For example, President Trump has tweeted that he believes flag-burning should be outlawed. The Supreme Court has upheld this practice as a protected form of protest under the First Amendment. The president has also called for a strafing of libel laws to curtail speech, particularly when it comes to political criticism. 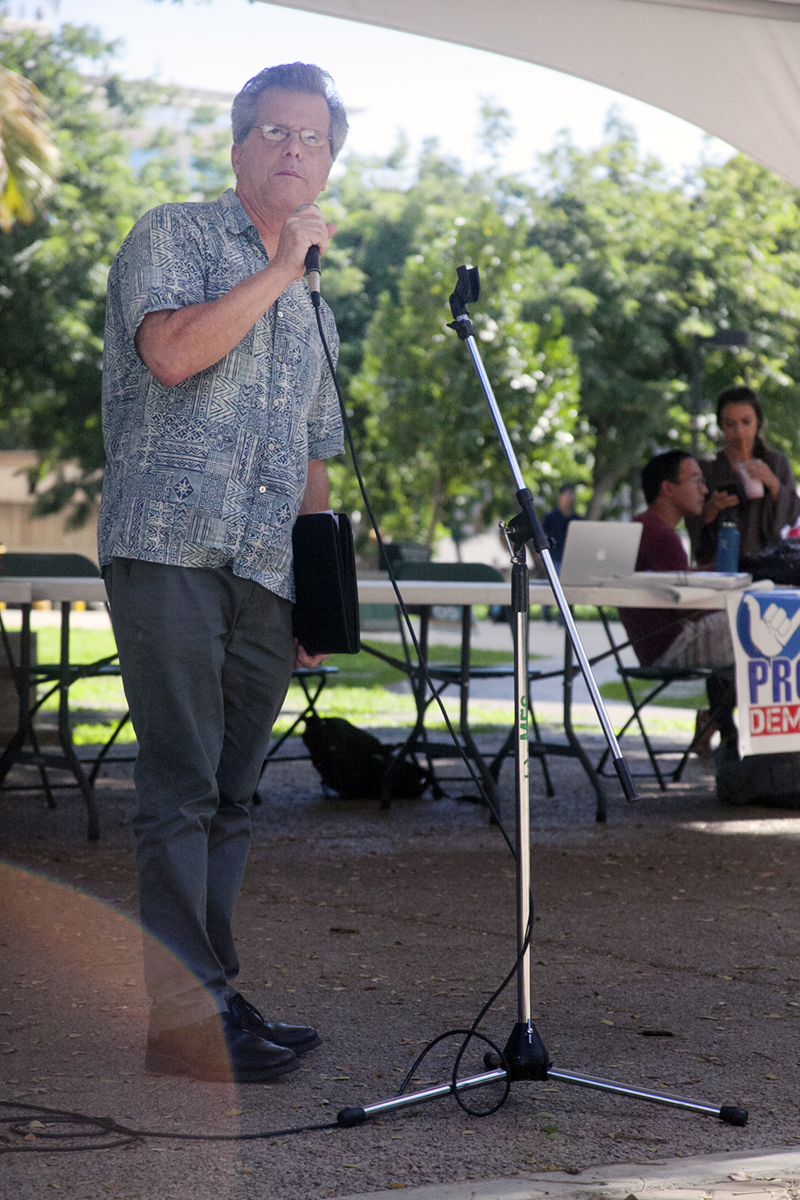 “Universities have long been centers of free speech activism,” said Arnade. “And we at the University of Hawaiʻi are absolutely committed to the right of assembly and free speech on behalf of our students, staff and administrators. We’re proud to be part of a long tradition of universities and student activism that goes back all the way to the Berkeley free speech movement in the Fall of 1964.”

Prior to the Berkeley movement, many universities and university systems, including the University of California (U.C.) system, prohibited political speech concerning non-university issues on campuses. In ‘64, a group of students involved in civil rights activism actively claimed the right to speak politically on university property, which sparked a series of events that culminated in the resignation of both the U.C. system president, Clark Kerr, and also the Chancellor of U.C. Berkeley.

During 2016, a number of student- and faculty-led actions took place on campuses around the country focused on diversity, police violence and a range of other political issues. At the University of Missouri, community concern over civil rights issues and increasingly overt racism on campus and around the state once again led to the resignation of the system president and the campus chancellor. Collegiate communities would not be able to discuss these issues openly without the activism in the ‘60s that paved the way to make free speech a hallmark of college life.

In the coming years, as President Trump continues to try and restrict First Amendment rights that challenge authority, it will be all the more important for campuses to remain bastions of free speech and free thought. It’s not just a right; it’s also a duty.