One does not have to turn on The Walking Dead or 28 Days Later to see zombies. Take a stroll through downtown Honolulu’s political, financial and legal hubs and, sure enough, you will find zombies. At banks, firms and the Hawai‘i State Capitol they form their hives. With Tori Richards and Reyn Spooner tucked into their pleated, untapered pants, sleeves dangling at or beyond the elbows, or button-down shirts tucked neatly into pencil skirts that open to high heels, they drag themselves from Starbucks to office and back, mindlessly feasting on payable hours, big investments and money-generating huis.

Thinking back to my time with peers in middle and high school and the nature of children in general, I swell with joy. Young people, so filled with happiness, curiosity, energy, vision, passion and life are infectious. They remind us that every space and time can be a learning experience, that fun and joy do not innately impede growth and work. In young people, one can find the best of what it means to be human.

But things change. Somehow many of my elite peers, ones who had every ounce of privilege and countless resources that could have supported brave attempts to become anything they wanted, or to truly be the change they wish to see in the world, went from exciting characters preaching and embodying positivity, to zombies going through the motions of professional life. Their curiosity, passion and vision was washed away and replaced by a narrow focus on careers, material gain, property and swelling bank accounts. I have seen masses of people die at 22, upon finishing college—willingly relegating themselves to the undead existence of a zombie.

What is this zombie and how does this process of zombification happen? How can these zombies bring themselves back from the dead? 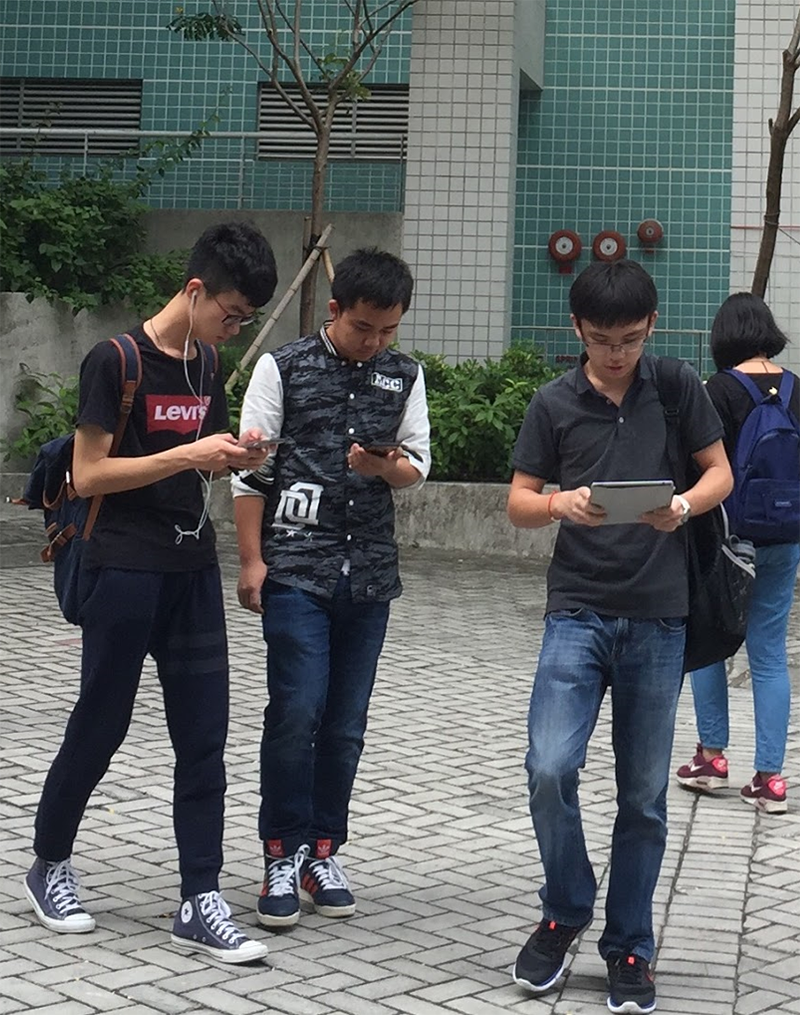 Zombies-in-the-making are often focused in on their smartphones, making them easy to avoid.

To understand zombies we must turn to recent work regarding the culture of capitalism. In Zombie Politics and Culture in the Age of Casino Capitalism, public intellectual and professor Henry Giroux highlights capitalism’s ability to turn humans into zombies completely enthralled by instant career, gratification, consumerism and propaganda. These zombies are fed lies: free markets liberate, profit is tantamount to democracy, austerity programs are necessary to improve society, success is only measured by money. Zombies are the human refuge of what Giroux calls capitalism’s politics of disposability, where everyone and everything is open to being disposed of for the sake of capital’s ultimate goal of profit. Land is trashed for pipelines, oceans for plastics, air for fossil fuels, bodies for for-profit prisons and minds for capitalist ideology and ads. For those found at the margins of what we are told is normal—ethnic minorities, LGBTQ communities, the poor, the disabled—this disposability is all too familiar.  In short zombification is the commodification of humans or the turning of humans into human resources.

Elites themselves, especially of younger generations, are not exempt from this process. Ernest Mandel, in his book Late Capitalism, describes how we might think of elites as zombies: “the real idol of late capitalism is the ‘specialist’ who is blind to any overall context.” Elite zombies, capitalism’s specialists and professionals, are so narrowly focused on their duty within capitalist structures, profit and career advancement that the plight of others, the environment and even themselves is ignored. Elites, having gone through years of training in college and professional schools, become the one’s pulling the levers and twisting the knobs of capitalism.

In school, up through and including higher education, elite youths—like all students—are slowly sapped of their idealism, passion and creativity. Brain deadening education methods like memorization, standardized testing, isolation inside the classroom and a focus on grades over growth detach learning from any possible connections to the world outside their elite bubbles as their curriculum preaches competition, careerism and other capitalist values. Politics is understood not as an avenue to achieve democracy, but as either completely foreign or as a tool for capital. Zombies are not aware of their human agency.

Once most people finish their time in school, they become what comedian George Carlin calls “obedient workers” or unquestioning consumers. The same can be said of elites; the only difference being that elites occupy positions of greater power within capitalism—corporate executives, politicians, bankers, accountants, lawyers, doctors, developers—and have different habits of consumption: a new Mercedes instead of a used Geo; Roy’s instead of McDonalds; or owning property instead of renting or homelessness.

Being a zombie is never entirely one’s own fault since, everywhere one turns, we are told to obey and consume by family members, schools and institutions, politics and the media. But breaking this cyclical process of zombification is difficult. First, we must recognize that education does not happen only during one’s time in school. We learn inside and outside of the classroom, before and after graduation, and at all times of the day.

One known avenue of salvation or unzombification is to infuse education, public pedagogy and culture more broadly with critical and civic education, and a moralizing praxis. Critical education is characterized by constant questioning, thinking, rethinking, dynamic and open dialogue, theorizing, acting and reflecting, and can be thought of as the extension or support of the natural curiosity and inquisitiveness of youth. Asking questions, especially difficult ones, is the only way to find answers or solutions to our problems. Having strong civic education in our schools, and for the greater public, that goes beyond describing the structures of U.S. government to analyze the process of turning ideas into actions and policy can help citizens recognize their agency within politics. Civic education must also show how art and culture are deeply tied to politics. And throughout all of these critical approaches to learning, a moral praxis, or an ideal vision of how one might want the world to be, must form the backbone around which we align our thoughts and actions.

Even when exposed to the toxic zombiefying agent that is capitalism, humans have the capability to make great change. Hawai‘i has a long and rich history of both Native Hawaiians and settlers resisting capitalism and rejecting zombification. The fight against indigenous erasure by the Hawaiian Renaissance, actions of the Protect Kaho‘olawe ‘Ohana, labor struggles of plantation or hotel workers, and the protests of Save Our Surf can inspire us today to make change.

Capitalism demands that we obey, consume and work hard without any critical thought, and that we all, especially elites, reproduce the structures of capitalism from which we ourselves emerged. We are told to compete, to raise ourselves above others to make the pay grade, get accepted to the school, or career we want. To break this oppressive pattern and resist turning into zombies we must think critically and compassionately, and work together.