There are over 7,000 varieties of tomatoes, and a broad spectrum was up for tasting this past weekend at the Haleiwa Farmers Market Tomato Festival. Tomatoes were on display in a rainbow of colors and celebrated by the 3,000 people who gathered to enjoy the juicy red goodness in its many forms: pizza, fresh squeezed tomato juice, salsa, tomato watermelon salad, fried green tomatoes, and so much more.

A personal highlight was finally learning the answer to the age-old debate: Is the tomato a fruit for vegetable? According to Big Wave Tomatoes, botanically speaking, tomatoes are the fruit of vines (berries to be precise), but a vegetable according to a famous court decision, the Tariff Act of 1883.

In the United States, tomatoes are second only to potatoes in U.S. vegetable consumption, according to enotes.com, and if people are enjoying tomatoes even a fraction as tasty as the ones in Haleiwa today, it’s no surprise why.

Each tomato at the Big Wave tomato tasting tent was a far cry from the hard, faintly red, dry tomatoes found in many of our local supermarkets. All the tomatoes up for sale and sampling were non-GMO and were locally grown: the Hawaiian current, a tiny red variety; North Shore black, an almost purple cherry tomato; pink and black cherry; pineapple tomatoes; and many more.

Every variety had its own distinct and unique taste, and were all so good it would be a shame to see a single one wasted on tomato throwing, a universal tradition that dates from the mid-nineteenth century. Begun in rural areas and moving to theaters to express lack of appreciation, tomato throwing became an organized event in Bunyol, a town 25 miles west of the Mediterranean city of Valencia, Spain in the late 1940s. Since 1979, the city has officially sponsored the Tomatina Festival where over 30,000 people pelt each other and the city with tomatoes for an hour on the last Wednesday of August. 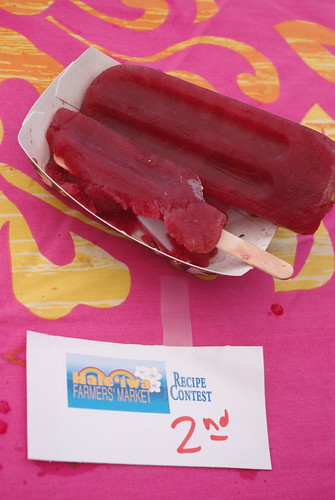 Tomatoes samples galore were shared with visitors who tried fresh squeezed tomato juice that was a world of difference from the canned tomato juice many of us are familiar with. Samples of individual tomatoes, salsas, and tomato salads were all up for grabs. Even Ono Pops, the local popsicle company known for their unique flavors, created a tomato basil pop that took home second place in the tomato recipe contest, and was a satisfying and refreshing changed from their sweet and fruity counterpart.

Luckily for visitors, all of the submitted recipes were open for sampling after judging. It was here I discovered that the common tomato has the versatility to create some very uncommon and wonderfully palate pleasing dishes, such as watermelon, feta, and tomato salad, tomato and sea asparagus salad, and a tomato and pineapple dish. Three winners took home a gift certificate for Leonardo’s Restaurant at Turtle Bay.

Most visitors went home stuffed on tomatoes, like my son who ate an entire pound himself. I went home inspired to experiment and cook up some new tomato dishes, and many left with a new take on tomatoes.

“Eating tomatoes usually means a slice on a burger for me,” said a woman sampling the winning dishes. “I didn’t know they could be used in so many dishes, I’m going to have a tomato night at my house after this.”

Whisk eggs and milk together in a medium-size bowl. Scoop flour onto a plate. Mix cornmeal, bread crumbs and salt and pepper on another plate. Dip tomatoes into flour to coat. Then dip the tomatoes into milk and egg mixture. Dredge in breadcrumbs to completely coat.

In a large skillet, pour vegetable oil (enough so that there is 1/2 inch of oil in the pan) and heat over a medium heat. Place tomatoes into the frying pan in batches of 4 or 5, depending on the size of your skillet. Do not crowd the tomatoes, they should not touch each other. When the tomatoes are browned, flip and fry them on the other side. Drain them on paper towels.

You can also fry up red tomatoes with this recipe but make sure they are not over ripe or they will be mushy.

Agri-tour offers insight into where our food comes from