HALEIWA—The North Shore is home to numerous farms that utilize the rich soil that has nourished various crops for generations.

I was lucky to be invited on the virgin voyage of Oahu Agri Tours’ North Shore farm tour—a new venture by Annie Suite and Pamela Boyar, the women behind the highly successful Haleiwa Farmers Market.

The tour isn’t a run of the mill tour of the usual Oahu sights. It’s the island’s first tour to take locals and visitors alike to the farms on the North Shore that cultivate the vegetables and fruits we find in our fridge. More importantly, the tour gives back to the farmers by contributing part of the profits to participating farmers. 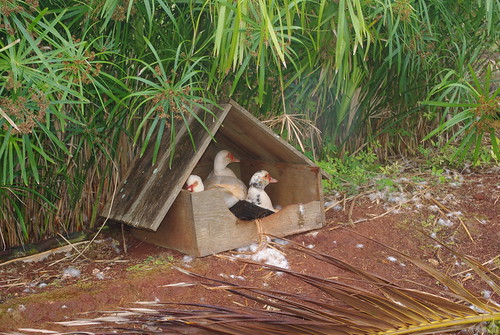 Ducks get cozy at Poamoho Farms.

While the comfy E Noa tour bus began its journey in Waikiki, which departs from several hotels, mine began at Poamoho Farms, where Al and Joan Santoro own and operate their seven-acre organic fruit orchard. Al, a former career naval Intelligence officer and Joan, a computer systems engineer, never imagined they would turn fallow sugar cane land covered with the ever-annoying guinea grass into a flourishing and beautiful organic farm.

Above the Poamoho Gulch, the birthplace of Hawaiian Royalty, approximately 300 fruit trees flourish. Mangos, oranges, avocados, lemons, limes, lychee, and so much more. 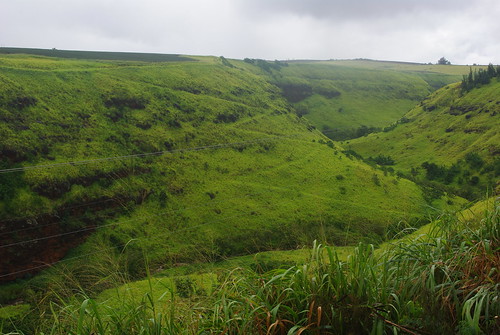 A bird’s eye view from above Poamoho Gulch.

An interesting note: The bright orange oranges in supermarkets from California and Florida are dyed orange (yuck). While Hawaii’s oranges are what Al called “ugly,” there’s a reason for that. Hawaii lacks the cold nighttime temperature that causes the fruit to turn a deep orange, and they tend to re-green when the temperature is warmer again during the day.

Al and Joan’s farm is strictly organic and complies with the USDA’s National Organic Standards. 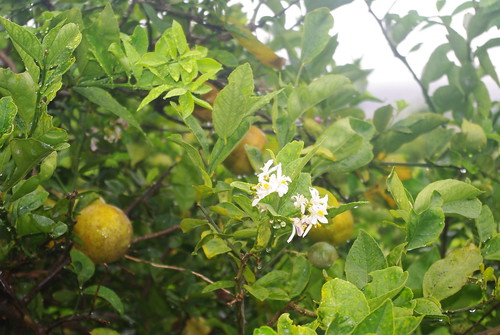 The next stop along the way was Mohala Farms. I was able to put a face to the cultivator of the salad greens I buy weekly from Celestial Natural Foods. Started in 2005, Mohala rests on six acres of former sugar land in Waialua and cultivates a variety of veggies using homemade compost, cover crops, crop rotations, and nutrient rich foliar sprays as a foundation for their organic practices.

The farm also hosts “wwoofers,” volunteers participating in the World Wide Opportunities on Organic Farms who travel the world volunteering and staying at organic farms. On the day we visited, youth volunteers from the YMCA were planting trees, pruning hedge, and happily breaking up a freshly completed batch of compost that took four months to cure. 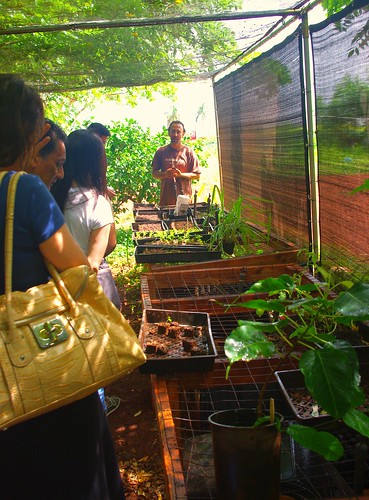 The tour gets a close and personal look at the salad greens from Mohala farms.

Mohala has a beautiful crop of collard greens, kale, swiss chards, herbs, and more. Although the farm has accepted a few grants, “We’re trying not to accept many because we want to get more people into farming,” said farmer Mark Hamamoto. “We’re committed to making it financially so we can let others know that you can actually make it as a farmer.” 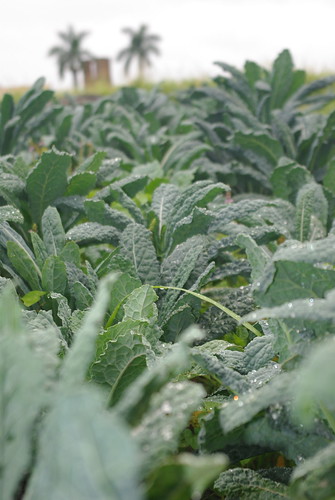 The tour then made another stop in Waialua to Dole Plantation’s chocolate operations. Dole has 12,000 cacao trees on 18 acres of land that was left alone and ignored after about five years of testing from 1995 to 2000. The orchard was then left dormant from 2000 to 2005. Long story short, when it was revived, samples were sent off to the Guittard Chocolate Company of San Francisco with no reply. One day a Guittard representative called saying: “I’d like to see your cacao. I’m at the airport and we want to work with you.”

Six years later, the cacao is flourishing and is grown and processed in Waialua. A special blend of the criollo, trinatario, and forestero varieties, the extra dark chocolate, is 70 percent cacao and marketed as Waialua Chocolate. 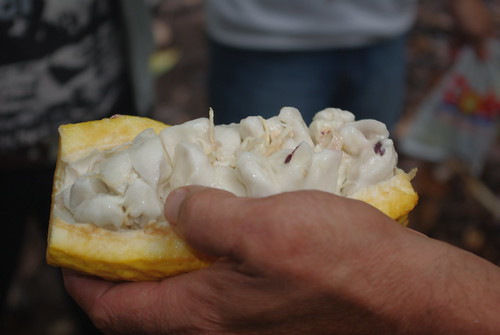 We also traveled over to the Waialua Sugar Mill that closed in 1996 after more than 100 years in operation. The mill now houses Waialua Coffee, surfboard shapers, and a shop selling local products. We also got a quick coffee demonstration and enjoyed some Waialua coffee, the first I’ve been able to actually enjoy black.

The next stop was my favorite, a kalo (or taro) farm in an unsuspecting area in Waialua where Steven and Kuuipo Bolosan cultivate several varieties of kalo. They educated us on the ins and outs of kalo cultivation, harvesting, and processing, and also gave us a presentation on the cultural significance of the plant. 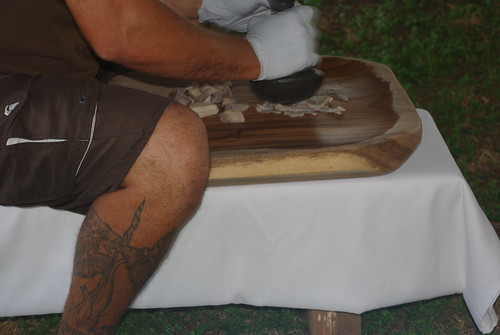 A kalo pounding demonstration in Waialua.

The growing and cultivation of the kalo plant is a tradition that stretches back for more than a thousand years. Native Hawaiians loved, honored, and cared for kalo and were in turn, as the creation story implies, fed and supported by it for generations. More than 300 varieties of kalo were selected for certain conditions, climates, and soils and by hand-pollinating over a millenia.

A fresh water spring provides the Bolosan’s drinking water that tests at 99.9 percent pure. The large pool has been there for years feeding the land’s residents.

“The owner is 95 and he remembers playing in this spring as a child,” Steven said. The husband and wife maintain the kalo themselves and produce what was hands down the best poi I’ve ever had. We were treated to a delicious lunch, a Hawaiian studies presentation, and a kalo pounding by Steven himself, and so will the visitors that take the tour in the future. 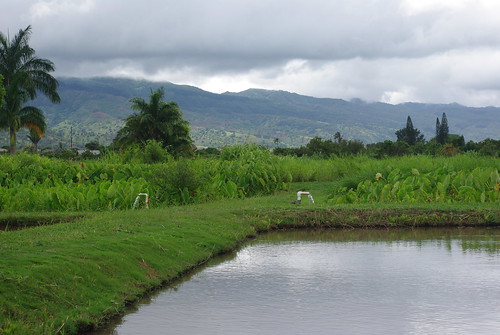 A view of the loi.

Last on the tour was Tin Roof Ranch where Luann Casey and Gary Gunder raise and process their own chickens right across from Chun’s Reef. They sell eggs laid on the land, and even process turkeys for Thanksgiving.

The couple had stumbled into ranching accidentally, they said, when they were asked to adopt 25 chickens. Next thing they knew, they were collecting and eating their eggs, then raising and processing. With a broad of over 300 egg layers and a rotation of “eating chickens,” the husband and wife are supplying fresh organic chicken to the North Shore, having earned quite the reputation. 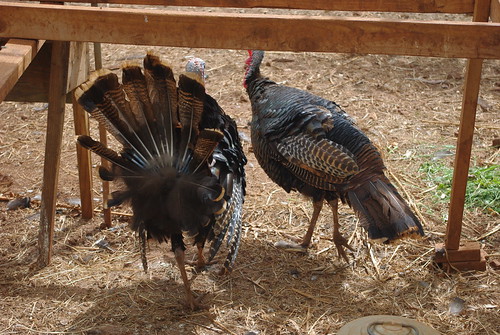 “They always sell out at the farmers market, no matter how many we have,” Luann said. Both the egg layers and eating chicken free range on the land and consume only organic chicken feed. They are currently processing around 100 eating chickens a month, something Luann said she had to get accustomed to doing.

Oahu Agri Tours offers a rare peak into the island’s farms and insight into a dimension many of us don’t think about: where our food comes from and what the people who produce it must endure. I recommend the tour for island residents and tourists alike.

For more information on the tour, visit www.oahuagritours.com.