The “pastoral” is another important topic in eco-poetics, referring to a long tradition of poetry about idealized rural life (similar forms include idylls, eclogues and bucolics). The pastoral goes back to ancient Greece, with poets like Hesiod and Theocritus, and to Rome, with Virgil, and through the literary renaissances of Italy, Britain and America. Throughout, the romantic pastoral acted as a criticism of the squalor and poverty of urban and industrial life. The pastoral encouraged a return to nature and rural life as a space of virtue, honest work, reflection, transcendence, and—even—romance.

Of course, anyone who has actually worked on a rural farm knows that it’s not all peaceful sheep and idyllic shepherding. Thus, a tradition of the anti-pastoral also emerged, criticizing pastoral poets for romanticizing rural life, as well as for ignoring the race, class and gender problems one might find on the farm (or plantation). These problems extend to how the rural landscape is often gendered in the pastoral as well.

Since modernization has removed so many from nature, many poets have imagined and fantasized what it might be like to live back on the farm, the ranch, the homestead, off the grid, etc. In class, we discussed one of the more interesting (and problematic) 20th century pastoral poems: Allen Ginsberg’s “Wales Visitation”—a Beatnik, LSD-induced, Vietnam era pastoral—which you can listen to here.

Admittedly, my favorite kind of pastoral is the “necro-pastoral.” “Necro” comes from the Greek nekros, meaning death or corpse. Imagine a landscape filled with dead bodies, enslaved bodies, diseased bodies, mutilated bodies, worms, rats, cockroaches, rabid animals, decaying trees, polluted rivers, smog, rotting food, ruins and blazing wildfires. This, too, has a long, changing tradition. Think certain scary fairy tales, the Book of Revelation, Dante’s circles of hell, the Gothic, vampires, zombies, apocalypse stories, Halloween, Bansky’s Dismaland etc. The necro-pastoral aims to make us look at death, sin, evil, fear and destruction so that we might consider our mortality, morality and ethics. Sometimes fear wakes us up more than romance. Like the pastoral, the necro-pastoral has its own problematic relation to race, class, and gender.

In terms of eco-poetics, the death and destruction caused by climate change has brought the necro-pastoral to the forefront of our imaginations. We are now surrounded by so many images and stories of the necro-pastoral—from the Tar Sands to industrial slaughter houses, from raging wildfires in California to massive chemical explosions in China, from the mass die-offs of fish washing ashore on Pacific coasts to the mass migrations of refugees to the shores of Europe. Collapse and catastrophe flood the stream of all our media.

Speaking of floods, Hawaii has experienced quite a few these last few weeks with the onslaught of a series of hurricanes. With all the rainfall, the streets of Waikiki were recently flooded with more than 500,000 gallons of raw sewage. Waikiki, often cast as a literary site of the Pacific necro-pastoral, was shut down.

So we decided to write poems about Waikiki, sewage and shit. We watched a short documentary about Waikiki, read an article titled “You Don’t Know Shit: Tracing doodoo on the islands from ancient times to apocalyptic futures,” and a poem called “Waikiki,” by Haunani-Kay Trask, which begins:

With all this in mind, please check out the student poems below (8 in all, about 30 minutes of reading time). Feel free to comment or to write your own shitty poems in response. 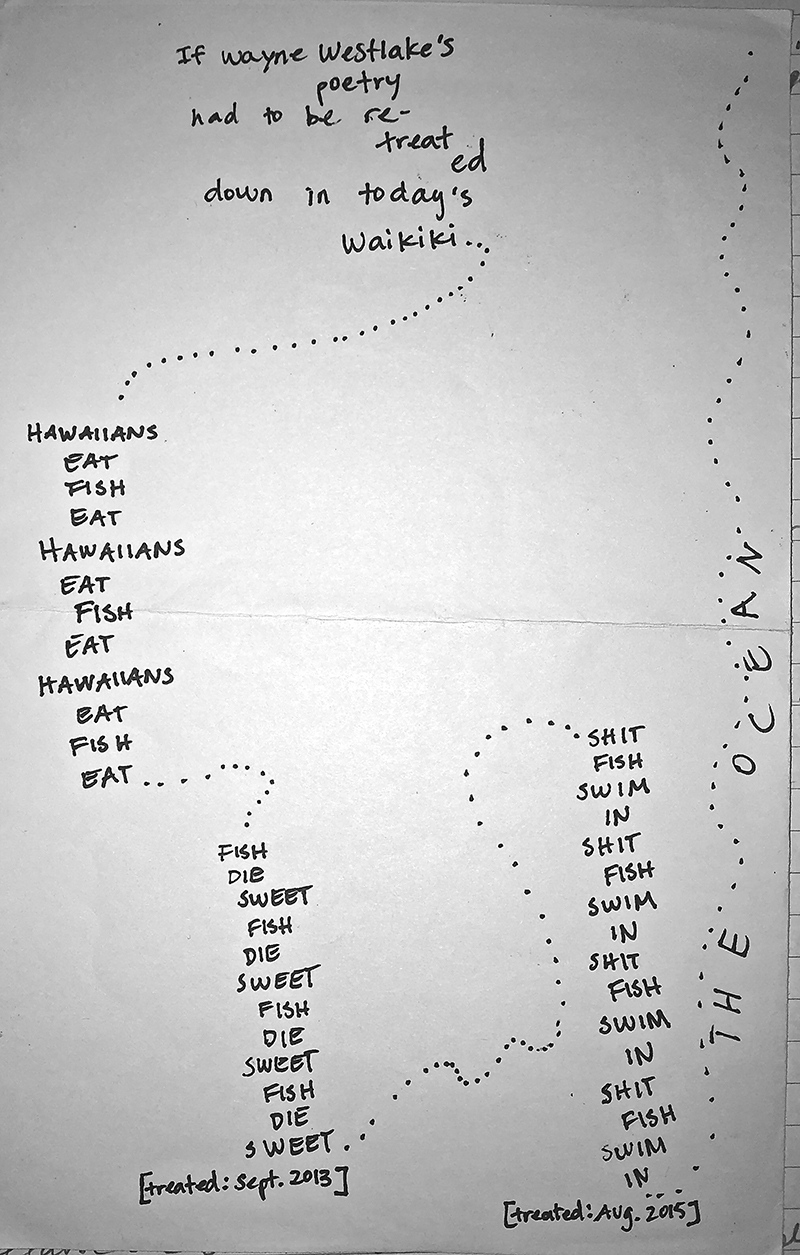 Conversation One:
So you’re kidneys aren’t functioning properly.
Do you understand what this means for your body?

Well… I guess it means I gotta start dialysis…

Yes. It means your kidneys can no longer filter enough waste
Out of your blood stream, so we’ll do it artificially.
That’s dialysis.

Do you know why your kidneys have failed you?
Do you have any ideas about how you got to need dialysis?

Sure, but do you have high blood pressure?
Over-development?
Diabetes?
An influx of tourists, maybe?

Yeah yeah, I get all those things.
But I still figgah it’s most old age, eh?

Hmph. I see you’re on both Medicare and Medicaid.
Is that due to disability or retirement?

I’m 87 years old. I retired 30 years ago.
So I get Medicare, Medicaid, Foreign Investors,
Film Tax Credits, Tourism Revenue, One beautification fund…
Yeah, I get all kine “financial incentives.”

Yes. Well. To make things easier, a vascular surgeon
Has fused a major vein with a major artery in your arm.
It broke, but we want to strengthen the fistula and use it ASAP.
This will be hard, but forming coalitions will help.

Conversation Two:
To help your kidneys through dialysis,
We highly suggest that you follow a renal diet:

On a renal diet you’ll have to avoid salt.
A young tourist cries into his shave ice,
Because the beach is closed and he doesn’t understand
Why it had to happen on his Hawaiian vacation.

On a renal diet you’ll have to avoid rich foods.
A young family suffers because they cannot afford
Any of these affordable new developments,
And the streets are literally turning to shit.

On a renal diet you can’t eat too many nuts.
A young woman wanders around looking sun-dazed,
Stops every so often to dig in the sand and plant a seed.
Shoppers walking by shake their head at another crazy local.

On a renal diet you can’t drink too much water.
Beware of days with heavy rain:
The Ala Wai is going septic too,
And there’s no telling how much more it can take.

Later, my Papa would tell me it was really all his fault:
Yeah, I knew about the diabetes. Too much sugar…
But I never really watched what I ate.
For a while, though, everything was so sweet.

In the place of civilization,
the industrial waste containers
overflowing with ʻōpala from cradle to grave
reflect back all that was lost
in the vast kai

But like chief Halaʻea, poisoned by greed
this regenerative force
now chokes the life out of its creators

waikiki courses
with arteries
of putrefaction

indifferent to their
own incomprehension

I feel the same, wondering
what part of our spirit
had to be dredged
to accept this
as civilization?

the excrement
inundating the streets and streams
a display of abundance

if you hold your nose

After a Sewage Spill in Waikiki
Henry Wei Leung

The subject is the sea.

The subject is the sea
which rises.

At its base,
bodies persist,
tanning, while towels
smother faces.
We are all bodies of waste.

The subject is a crust which also rises,
a crown and a survival,
an old eruption
now growing green.

Some of us spill our remains
where we know we do not belong.

Silent evacuations. A carving
on the surface of the sea.

of the English language
which arrived
by taking from other languages.

How to Profit from Your Native Land
Jessie Lathrop

Come ashore and notice the sustainably irrigated earth
The sustainably irrigated people
The vibrant fishponds and lush taro and tall, tall palms
Bring disease with you as you disembark
You’ll want to give that to the locals
Trade it for their land
Then round them up for not having said land
Put them to work, put them in jail, put them in missions
Rope God into what you’re doing

Always take more than you give
Gather your friends and infiltrate the government
(Write laws that hand out disadvantage
Like your country does you currency)
Overthrow it
Today Hawai‘i, tomorrow the world

waikiki
backed up
and
jacked up

the buck stopped way way way over there….

Too Much Mana
Brian Lieu

Are we moving
forward, or back?
Why take the land, so-
il, dirt, livelihood?
Why take our man-
a-infused earth? Do
you even know
what’s buried do-
wn there, he-
re, everywhere?
If you knew, you’d
know it’s shit—to-
tal crap. Bullshit per-
haps.
Our lands go-
ne just for car-
e to not be
taken.
Guess where your
mana’s inf-
used. In
the
water.