Our last lesson focused on poetry of extinction. This week’s lesson highlights something that will exist forever: plastic, part of the larger topic of waste and garbage.

A major gathering place for plastics is the Pacific; from the swirling “Great Pacific Garbage Patch” to the shores of Midway atoll, a northwestern Hawaiian island and wildlife refuge for the Laysan Albatross, a species that mistakes plastic for food. (See the documentary Plastic Paradise).

In class, we discussed several poems about plastic, including “Pacific Garbage Patch” by Lyz Soto, and “Fall Equinox” and “Kaleidoscope” by Victoria Sloan Jordan. Jordan was part of Midway Journey, a project that brought artists to witness and comment on the environmental devastation on the islands.

Over the weekend, we also read Allison Cobb’s e-chapbook, The Autobiography of Plastic, an exploration of the the personal, poetic, environmental and military histories of plastic. We also browsed Cobb’s blog, which documents her everyday experiences with plastic.

Because plastic has become such a normal part of our everyday lives, environments and even bodies, poems about plastic help us to truly see its impact, entanglements and dangers. These poems also challenge us to change our lives and challenge the plastic industry.

Below you will find a sampling of poetry about plastic from our class. The next time you feel the urge to use plastic, why not write a poem about it instead!

It never goes away…
It kills, but can’t be killed…
The albatross was full…
What’s stopping us from being full
one day…?
(We’re already fool…)
Our greatest phobia should be of it and of what it can do…
My greatest phobia should be of it and of the fact that I contributed…
Number 1 Polyethylene terephthalate Number 2 high-density polyethylene Number 3 polyvinyl chloride
Number 4 Low-density polyethylene Number 5 polypropylene Number 6 polystyrene
Number 7 Other…
What more lurks behind the darkness of Other…?
A new phobia in the development…
What more will be killed by Other…?
Fish are friends, not recycle bins…
Birds look better in the air than in the ground…
How much of the ocean will be inherited by Other…?
Underwater real estate is in demand…
How much more of Earth will be inherited by Other…?

I was more in the deepness of my eyelids than the room as that line sounded from the screen inside its plastic frame.

“Plastics,” said the man – quite suddenly, at the party far away – to the recently graduated main character.
“Go into plastics.”*

Black eyelids gave to the Arkansas scene of an old family story. My mother imitated one of her aunts listing beans to my father.
“You got yer breaky beans and yer pully beans and yer snappy beans and…”

The white plastic suits whirred with the fast-forward of a VCR-recorded home video.
They stopped on my great aunt rattling off a different list, the same smile on her sporadic teeth–
“You got yer plastic mixin’ bowl and yer plastic toothbrush and yer plastic garbage bag and…”

She whirred and melted in place under the gray-black horizontal zigzags, an old movie, and the crinkly white suits stormed into the dish again with a disemboweled albatross.

I woke up to the credits rolling white on the black screen in front of me, the arm of my white plastic suit crumpled as I turned it off.

(Adapted from the movie The Graduate.) 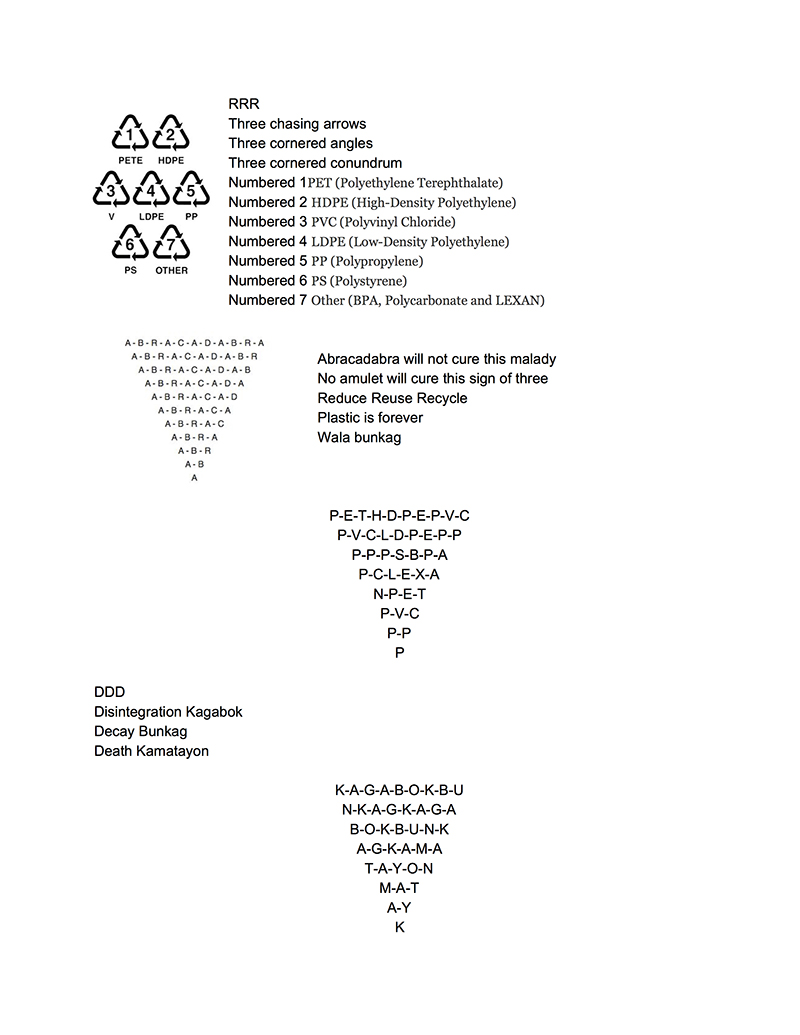 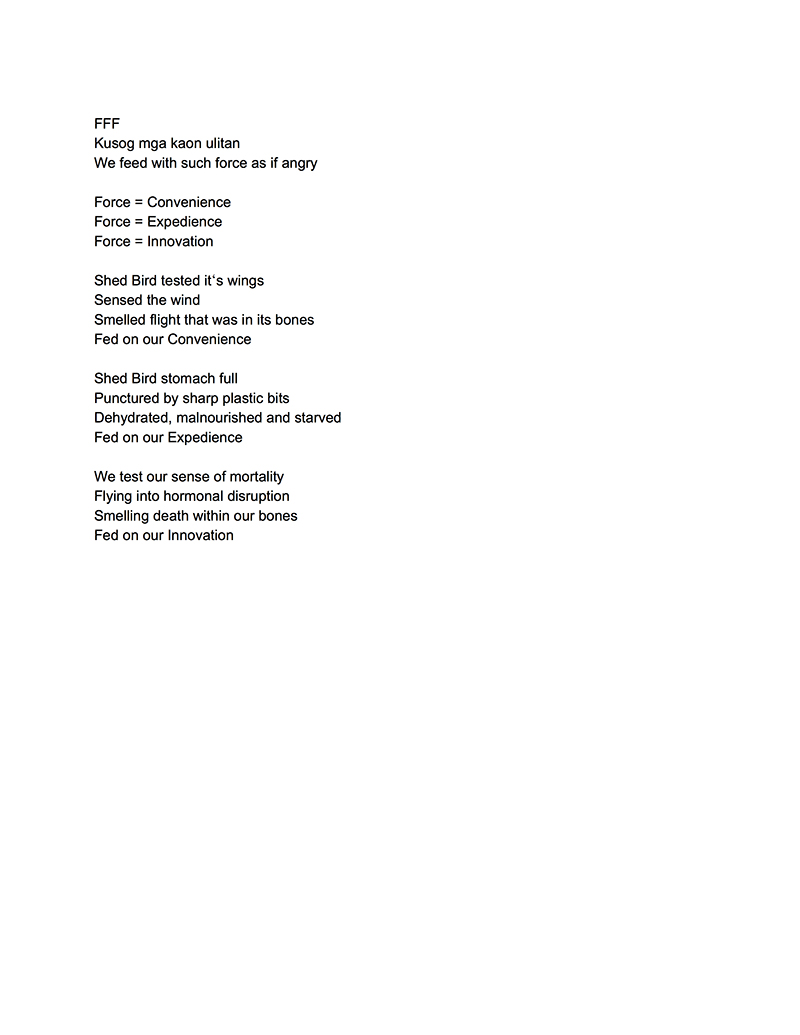 Above: “Plastic Poem” by Darlene Rodrigues

When the time comes
for them to cut me open,
I wonder how
plastic they’ll find me:
how mouldable my dreams
as they cooled into easy
pragmatics.

As sure as you and I are alive,
Plastic: people telling lies
about the suffering it causes.

What’s happening on Midway is that
we have turned albatross into canaries
warning us that what affects the ocean
will eventually reach us on land.

Entanglement,
couched in a backwards metaphor.
Hundreds of years of limu
farmers have known that pilikia
flow
from
the mountains
to     the   sea.

We forget that we are of the land,
and become a problem on it.
Dolphins laugh to keep from crying
as our neglect becomes their poison.
Entanglement.

Designed to last forever,
destined to be used only once.
Every molecule of plastic ever
created is still somewhere
on the planet—we are still
working towards the great galactic
garbage patch.

The writing on the wall is clear:
every drop of water there is or was
or ever will be exists right now.

When we have finally suffocated the
ocean with plastic bags—millions
by the minute—and when it is humans
who starve (lacking an ability to digest
legos) who will be left to remember and say
that plastics made it possible?

Another History of the Thing
Henry Wei Leung

Via ancient Greek πλαστική via second-century Latin plastica (Tertullian) via postclassical plasticus via Pliny’s plasticē via 1476 Italian arte plastica, “the art of modelling or sculpting figures, esp. in clay or wax.” Via English, “that which moulds.” Sir Henry Wotton in 1624: “Plastique is not only vnder Sculpture, but indeed very Sculpture it selfe: but with this difference; that the Plasterer doth make his Figures by Addition and the Carver by Subtraction.” In a letter in 1633: “Must needs consume all the active powers of any vegetable and leave nothing but a plastick and passive virtue.”

[What carving might mean in this world. Incompatible mercies.]

Robert Plot in 1686: “How dame Nature came thus to miscarry in her plastics.” Henry More in 1682: “All souls are indeed with the Plastick whether of Brutes or Men.”

Via French plastique, “art of modelling” (1765), via “physical appearance of the body” (1865), via “solid material that can be moulded” (1875). In Lancet in 1837: “Plastic surgery . . . a branch of surgery in which alone the operating surgeon becomes a real artist.” In Müller’s Archaeol. Art in 1852: “The plastic talent which creates material forms cannot certainly fail to be recognized even as early as Homer.” Ellen G. White in Life of Christ in 1875: “The creation of groups by successive acts of divine power, or . . . by successive acts of the plastic force of nature.”

[An aside, from 1961, the American Heritage Book of Indians: “The uncanny plastic skill and a certain taste for the maimed and the monstrous . . .”]

In National Geographic in 1976: “There is a need for plastic that will retain its clarity and stand up to a lot of punishment.” In 1990, Buzzworm: “Don’t buy plastic unless it is recycled or recyclable plastic.” In 1995, Atlantic Monthly: “This is a rare plastic moment in history, if only this country’s leaders would realise it.”