EWA—I made the trek last week to Oneula Beach in Ewa. The long drive out, with broken air conditioning, nonetheless, reminded me why this area is called the Plains. I thought of Nebraska – pancake flat and mud-cracking dry. I fanned myself with a rolled-up newspaper. Mirages of flowing streams faded in and out of view on busy Fort Weaver Road.

I was on my way to meet Henry Chang-Wo, co-founder of the Ewa Seaweed Project. For 12 years, he worked to preserve what Hawaiians once called “The House of the Limu.” Uncle Henry, as the youngsters call him, alleged this strip of coastline was, at one time, home to every species of seaweed found throughout the islands. Now the reefs are relatively empty.

After stumbling through traffic, I arrived at the beach and parked in the sanded dirt lot. Because the plants heavily line the shore, the locals also call the area Hau Bush. And the Bush feels every bit as hot at as the rest of Ewa. Even the eponymous shrubs looked balding and needy as some of the leaves were splattered with yellow. The salty ocean air rankled my throat and I coughed. I turned to the sea and the waters were tame and clear enough to make out the bottom—mostly sand and rock.

Uncle Henry, who I followed into the far end of the parking lot, got out of his car and motioned for me. We walked off alongside the lot to what was a dirt area dotted with coconut trees and some shrubs several yards above the shoreline. We then made our way to what appeared to be an old shaft. A large oval boulder partially capped the opening, but I could easily make out the bottom: a muddied pool of stagnant water.

“Up until three or four years ago, the water here used to flow straight to the ocean,” he said. “You knew because there used to be a lot of toads here. They need the fresh water.”

“And how does this connect to the seaweed exactly?” I thought, my forehead wrinkling.

“You have to understand that the ocean needs to drink,” he said, seeming to anticipate the confusion. “When the water from the mountains meets the ocean, that’s when the ocean gives birth. That’s where there’s the hanau. That’s how the limu grow.” 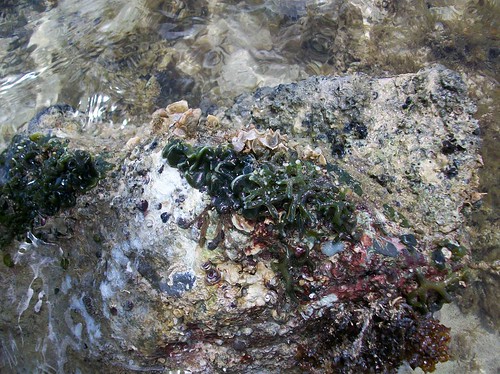 Up until that point, the thought of flowing water in Ewa was as real to me as the mirages on Fort Weaver. I had assumed that the golf courses and endless subdivisions drew their water from faraway places. But below the summer heat of Ewa, the underground pulses with it.

For thousands of years, rain from the Waianae and Koolau mountains have drained into the vast underground channels of the Plain. Those waters then used to flow heavily out to Pearl Harbor’s and Ewa’s shores. According to Uncle Henry, limu needs this constant flow of brackish water to thrive. “It needs the sweet water from the top,” he said. “It cannot grow without it.”

But over the last several decades, heavy development in the region has severely crippled the watershed’s massive flow to the sea. The large demand for water in the growing community has resulted in its migratory shift away from its ancient ocean destination and, instead, toward pipes that connect into homes and golf course sprinklers. Uncle Henry believes the ocean is now suffering because of it.

As a child, the 69-year-old practically grew up on Oneula Beach. He remembers the Hau Bush being so sturdy and tall that he would climb to the top and gaze far out into the horizon. There was a pump just several yards from shore that brought fresh water from directly underground, so in place of dirt there was thick grass and plenty of keawe trees, which he watered all the time. And the ocean was just as rich.

As we walked back toward the parking lot, Uncle Henry spotted an old friend, and they reminisced. “There would be 30 guys at a time grabbing the limu,” said Al, a lifelong Ewa resident as he sat on the opened trunk space of his van. His aged eyes squinted toward the clear waters just below. “The place was loaded.”

“Yep. The whole place was just covered” Uncle Henry said. “And you knew it was because of the fresh water. The Hawaiians always knew that.” According to him, you could feel and see the mountain water entering the sea. “You could feel it gushing out from under you when you were in the water ... you could see it coming up from the sand on the shore. You could even see it in the water because of the thermocline,” he said. I imagined it, very roughly, to seeing a light vegetable oil in water; there’s a slight tinge and nuanced change in texture.

Uncle Henry said he grew up in a time when the old ways were transitioning out. “Back then, when I was with some of my kupuna, I couldn’t pick certain seaweed or catch types of fish at certain times of the year,” he said. “I couldn’t even swim near some places. That’s how strict they were. You wouldn’t believe some of the things ... how well they knew their environment. They knew how to take care.”

We made our way down to the shoreline and Uncle Henry evaluated the water. There wasn’t as much seaweed as he wanted to show me, he said. “I can tell you all the native limu that grow here. But I know a better place ... at the No Pick Zone.”

Signed into law by Governor Lingle in 2006, The No Pick Zone backed by Act 293 prohibits the picking of limu from this area a few miles east of Oneula Beach until January 2010. Because the area is still believed to receive fresh water from the mountains, Uncle Henry said it’s a good place to see how much can be brought back from over-picking and encroachment of invasive species. 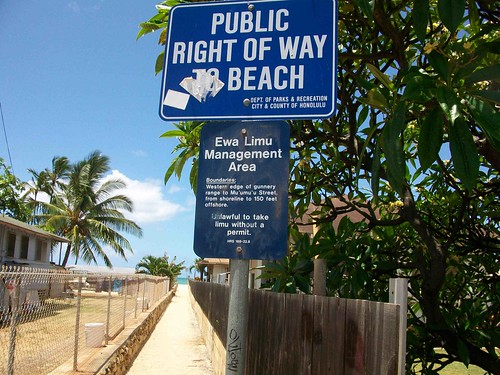 The No Pick Zone is Uncle Henry’s classroom and preserve

We parked on the side of the neighboring street and made our way past the slim opening between two properties. We headed onto the shallow reef. Uncle Henry began to rattle out the names of the assorted seaweed clinging to the shallow rocks: Waewaeiole, Manauea, Eleele, Huluhuluwaena. He not only identified them, he noted the times when some are ready to be harvested and shared some of their more interesting characteristics. “This limu clings more tightly to the rocks when they’re ready to spread their young,” he said, pointing to one. “This one makes one ono (delicious) seaweed juice ... and, I don’t see it here, but the Alani is used for medicine.”

It wasn’t long before we saw some of the invasive ones. He pointed to a few straggling mud weeds, algae that smother the coral and other seaweed. He easily spotted the Gorilla Ogo, a bright almost-yellow seaweed with tentacle-like arms. “This one’s making its way here from Pearl Harbor,” he said. “Can you imagine that we collected 700 pounds of these at one time?”  He yanked it out by the root and threw it high up on the sands.

We both continued poking around the shore. He was combing through a seaweed bed when I asked how the No Pick Zone is doing two-and-a-half years later. A few moments later a baby eel scurried from one algae patch to the next. “Did you just see that?” he said. “That’s a good sign because the eels are scavengers. It means the reef is healthy.”

There are other ways to tell, too. “I know I have a healthy reef when I see the Eleele because it needs constant fresh water to grow,” he said. “The Kala is the heartiest seaweed, so when that’s going, you know you’re in trouble.”

He took a long scan at the shoreline. “But, looking around today, I think it’s doing alright.”

Just how many people are alive who can read nature that way, I’m not sure. Michael Kumukauoha Lee, another founding member of the Ewa Seaweed Project, knows the rich lore surrounding the seaweed. He mentions the shark goddess Kaahupahau, who is known to wear a lei of limu, and of the once famed Oio fish of Ewa that tasted like the Lipoa seaweed on which it feasted. “Limu is very important to the Hawaiians,” he said, and added that the old tales are not just stories but lessons to teach people about the balance of nature. “If there is no limu, many of the fish who eat the limu will disappear, too,” he said. “Without the seaweed, the whole ocean shore suffers because the diversity of life disappears.”

Protecting this fragile shoreline has required legal action. In 2006, project members, with representation from the Native Hawaiian Legal Corporation, petitioned the court to reverse the state’s Department of Land and Natural Resources’ (DLNR) decision to allow developer Haseko’s construction of an outfall that would release nearby waste water through Papipi road and out to the waters near Oneula. In January 2008, the court agreed that DLNR did not adequately assess the cumulative effects on the environment. The project is currently stalled. Recently, the state agency shot down Haseko’s proposal to construct an outfall leading from Kaloi gulch on the western end of Oneula after determining that the gulch had adequate storage capacity to handle the waste water from the surrounding communities. 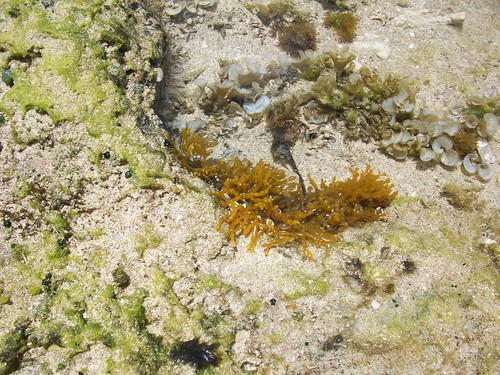 In spite of these successes, Uncle Henry feels that one can only hold back progress for so long. “The developers always win,” he said. “Eventually they’re going to build that storm drain. It’s all about who has the money.”

We made our way back to Oneula beach and sat on the concrete posts that form the perimeter of the parking lot with a group of his friends: regulars who come to fish, drink beers, and talk story. One guy remembered seeing so many eels at Oneula “back in the day.” Long-timer Al reminded us how much fish there used to be—so much that you could see them shimmering on the waves. Uncle Henry remembered this stretch of coast was once called the “House of the Limu.”

Since the project’s inception in 1997 through a sponsorship by the Queen Liliuokalani Children’s Center, Uncle Henry has focused on education. He has presented more show-and-tells than he can remember with foster children, high school students, and Hawaiian clubs. He has organized cleanup days and has facilitated countless limu replanting projects. But, most importantly, Uncle Henry wants people to know how special Ewa Beach once was—and what it has become. “This place was beautiful,” he said for about the third time that day. “And now look at it. It’s nothing like how it was.”

To Uncle Henry, it will never be the same. “People need to understand that once you take away a natural resource, you can never get it all back.”

The wind whipped for a moment and flung up some sand. Al checked his land-planted fishing line to see if anything caught. Others shuffled through the cooler for beers. Uncle Henry, who’s sitting on the top of a table, began gently shuffling his feet as he stared out onto the bare shallow waters. And he started to curl his toes. “My grandma and I used to pick seaweed with our feet,” he said. “That was small-kid time.”