HONOLULU—Oahu is one step closer to seeing its first wind farm in over 20 years as Kahuku Wind (KW) just selected RMT Inc., an energy and environmental company, to construct its wind-energy facility in Kahuku on Oahu’s North Shore. Kahuku Wind broke ground on the site on July 13, and expects the farm to generate 80,000 megawatt hours of clean energy each year, all of which will go into the Oahu power grid.

Upon completion, the Kahuku Wind Project will have the capacity to generate enough renewable energy to power 7,700 Oahu homes. Kahuku Wind, a subsidiary of Massachusetts-based First Wind, said the project is expected to be complete by the end of this year. The 575 acre parcel of land is located near Charlie Road, between Kahuku Town and Turtle Bay, mauka of Kamehameha Highway on land owned by First Wind.

The Madison, Wisconsin based company will be providing engineering, procurement, and construction to support the installation of 12 2.5-MW wind turbines produced by Clipper Liberty. The civil infrastructure will include roads, crane walks and pads, and turbine foundations. RMT will also design and construct the electrical infrastructure, a 7,000-square-foot operations and maintenance building, and is also responsible for tower erection.

First Wind representative Wren Wescoatt described the communication tower as, “Part of a communication system where First Wind needs antennas at six different locations to function. It’s a safety measure to enable HECO to communicate with the control. The system allows for grid stability. HECO can disconnect the farm’s energy from the grid if there is a fault on it, such as a pole going down nearby, then HECO can stop our energy from running on the grid.”

“After RMT built our Milford, Utah, wind farm last year, we knew we’d be working with them again,” said Michael Alvarez, First Wind President and Chief Financial Officer. He added, “They have proven that they can handle the challenging engineering and construction issues to keep our projects on schedule and within budget.”

The Kahuku wind farm will not only be the first on Oahu in over two decades, but will feature the largest battery energy storage system (BESS) in Hawaii.

Wescoatt described the BESS, developed by Xtreme Power Inc.: “Essentially, it’s short term storage. As wind gets stronger, the turbines generate more electric output. It goes up and down as the wind dies. So it uses power that is stored in the batteries and injects it into the grid when the wind dies so that the energy generated is even. It mediates the increase and decrease in wind.”

First Wind is currently focusing on developing wind farms in the northeastern and western regions of the continental United States and Hawaii. They have one wind farm currently operating on Maui called Kaheawa Wind that generates 30 megawatts (MW) of energy, providing up to nine percent of the electricity distributed by Maui Electric Company, and are developing Kaheawa II, which is expected to generate 21 MW of energy. The company altogether produces 478 MW of energy through six operating wind farms throughout Hawaii, Utah, New York, and Maine.

Unlike fossil fuels, wind energy does not pollute the earth nor cause carbon emissions that contribute to the growing problem of global warming. Under the energy agreement signed between the State of Hawaii and Hawaiian Electric in October 2008 as part of the Hawaii Clean Energy Initiative, Hawaiian Electric committed to increasing renewable energy statewide by 1,100 megawatts by 2030. 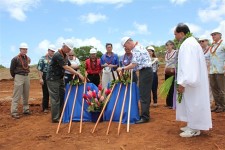