As a long-time Rotarian and former State Representative, I was recently invited to Kauai as the graduation speaker for the Rotary Youth Leadership Awards (RYLA) Camp. The focus of RYLA Camps is to learn about leadership through the lens of the Rotary four-way test to see if a planned action is compatible with the concept of “service above self.”

After my presentation, one of the high school participants approached me with his request that I communicate his concerns about the proposed rail system on Oahu to the Governor. He felt that it was unfair and unbeneficial for “neighbor island” residents to have their taxes increased to pay for the cost of the rail, since they probably wouldn’t use it and because it seemed very “expensive.”

He was very clear that the rail system failed several of the Rotary questions.

I was so struck by this young man’s perspective and clarity, that it caused me to ponder about the proposal currently progressing through the Legislature for an undersea electric transmission cable and wind turbine operations on Lanai and Molokai to serve the energy needs of Oahu.

Curiously, during the same week, I was contracted by Molokai Properties Ltd. to facilitate three community meetings in different locations on Molokai to inform residents about wind turbines, in anticipation of State intervention.

I went into the assignment with no preconceived ideas and the genuine willingness to learn more about the “big wind project” proposed by the State. After becoming more informed myself, and fielding community questions and concerns to the wind development consulting company who was invited as a resource, it was eminently clear that the “undersea transmission cable scheme” is more than what meets the eye and that Senate Bill 367 warrants careful scrutiny by the Legislature and the public.

On Tuesday, the House Committee on Finance passed Senate Bill 367 by a vote of 15 to one.

Senate Bill 367 and its companion bill, House Bill 1176, submitted by Hawaiian Electric Company (HECO) appear to establish a regulatory structure under which an undersea electric transmission cable can be developed, financed, and constructed using wind turbines on Molokai and Lanai to fulfill 10 percent of Oahu’s electricity needs.

Eventually, all the costs of building the proposed cable would be transferred to the system’s ratepayers—including those who live on Molokai and Lanai.

House Bill 1176 was referred recently to the Senate and has not been scheduled for a hearing, which indicates that Senate Bill 367 will be used as the vehicle for the public to watch.

Having served in the Legislature for three terms, there are several factors surrounding the project that are particularly troublesome for me and cause for attention by the public.

Over 55 testimonies from local, national, and international individuals and organizations were received in opposition last month, causing the March 17 hearing to be rescheduled to March 21 so that the House Energy and Environment Committee Chair could convene all parties involved and discuss possible amendments to the bill. Only HECO, DBEDT, and the Consumer Advocate offered testimonies in favor, yet the bill subsequently passed through the joint committee hearing. Thirty more testimonies were offered at the March 21 hearing.

To read testimony in opposition to Senate Bill 367 by Robin Kaye, click here

Testimony provided by the Consumer Advocate at an earlier hearing before the House Energy and Environment/Consumer Protection Committees on February 10 called the measure “somewhat premature as the proposed cable and power source that will deliver the energy to be transmitted over the cable are still subject to various permitting and other reviews before the Public Utilities Commission will be required to review the appropriate application(s) regarding the cable and Big Wind projects.”

The Programmatic Environmental Impact Study (PEIS) to be conducted by the State and the U.S. Department of Energy for this “undersea cable scheme” is only due in April 2012. This is a preliminary and necessary step before even one of the four required Environmental Impact Statements (EIS) can be initiated over a 12-to-18 month period to determine the consequences of soil run off, water pollution, impact on birds, seat turtles, and other marine life, as well as cultural and social implications of the project.

At the same February 10 hearing, while acknowledging that the projects proposed in the bill—industrial wind turbine power plants on Lanai and Molokai, an undersea transmission cable, and related infrastructure—are a means to transition to “clean energy,” the Consumer Advocate recognized that they:

“[A]lso represent potentially adverse impacts on Hawaii residents in terms of culture, lifestyle, financial health, etc. All of the relevant factors must be properly weighed in order to balance the policy of clean energy with the impact on Hawaii’s residents.”

On February 25, the Public Utility Commission expressed similar concerns before the Senate Ways and Means Committee:

“The Commission is still concerned that a certain amount of the potential risk to ratepayers, which may be unavoidable, will continue to exist if a project of this magnitude goes forward.”

The term sheets for the wind turbine project were due on March 17 according to the Public Utilities Commission Decision and Order No. 2009-0327 (November 18, 2010). These documents were not produced on March 18.

The Public Utilities Commission granted HECO a “waiver” from complying with a competitive bidding process so long as certain conditions were met. Each of the bidders, David Murdock (Castle & Cooke), and First Wind Hawaii, was required to produce “a fully executed term sheet” that must include: the scope of the projects (technology, capacity, location); how the energy would be delivered (as-available or scheduled); the term of the agreement, including in-service date and milestones; performance standards; and pricing.

The lands needed on Molokai have not yet been identified or secured. On January 11, Castle & Cooke announced that it had reached terms with HECO. There has been no such announcement from First Wind Hawaii, which has been unable to negotiate any access to land on Molokai on which to build their proposed industrial power plant.

The failure of HECO to timely comply with Public Utility Commission mandates further underscores the question: What’s the hurry?

• The height of each turbine, including blade, is 436 feet (the First Hawaiian Bank Building in downtown Honolulu) with a blade length of 151 feet and a blade span of 302 feet.

• The concrete foundation is 50 feet in diameter and8 feet depth .

• The turbine stalk has a circumference of 15 feet wide at the base.

As evidenced by the numerous individuals and organizations submitting testimony on Senate Bill 367 in both the Senate and House hearings, those most personally, physically, and financially affected believe that this bill sets in motion a process before the impacts to the islands are fully identified—or other option are even explored.

The Governor issued a statement on Molokai during the community informational meeting on March 3 that the State is willing to exercise eminent domain and condemn private land on that island for the purpose of establishing a wind turbine plant. This news is also extremely disconcerting—and premature.

The Governor’s actions further beg the question: What’s the hurry?

Senate Bill 367 establishes the cornerstones for a system that will be carrying non-firm power from the neighbor islands to Oahu, rather than enabling each island to become more energy self-reliant, which has been the intent of the Clean Energy Initiative since its adoption several years ago—and one of the current administration’s stated goals.

The public, however, has had no indication of the implication of costs to the ratepayers on all three islands, should this project even be initiated. The Public Utility Commission can set rates, but the notion only benefits those on Lanai and Molokai if Oahu rates stay the same or decrease. This is highly unlikely, given the proposal in Senate Bill 367 that lays the costs of recovering the expenses of building and owning the undersea cable on the backs of ratepayers, through “rate increases,” “automatic rate adjustments,” and “surcharges.”

My former colleagues in the Legislature must ask different questions and the public must require concrete answers.

We are all assigned the stewardship of our islands. Rushing around to find a “quick fix” or to “get ready,” is not going to do us more good. In fact, it can create more harm than good. We need to move resolutely, and not with anxious hurry or out of fear. There’s a difference.

Rushing removes resolution, often replacing it with panic or irrationality or, at best, not well thought-out choices. The reality of a fiasco that the system might not even be completed especially in these economic times, should be cause enough to make decisions more deliberately.

We need to keep moving toward the possibility of more energy self-sufficiency for each island and continue exploring options, including experts in the renewable energy fields in our deliberations, and dialoguing about the scope of our ideas. Sure and steady will gets us there every time.

And regarding Senate Bill 367, let’s continue to ask the question: What’s the hurry?

To read “Wind farms are redundant: A DETAILED ANALYSIS OF THEIR ALLEGED FUEL AND CO2 SAVINGS,” click here 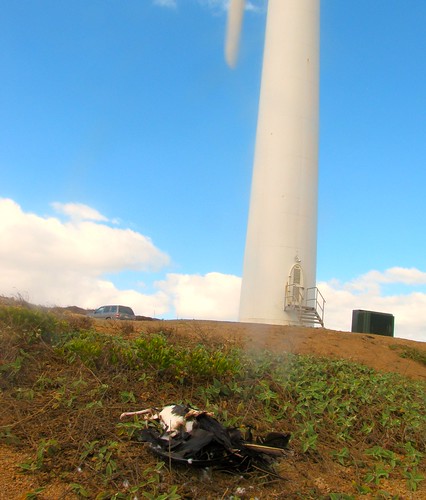