The following essay was written by the community group Friends of Lana‘i.

LANA‘I—In 2008, real estate development company Castle and Cooke announced its intention to build a 400 MW industrial wind power plant on the island of Lana‘i. This was quickly hailed by the State of Hawai‘i as a significant step toward the voluntarily agreed-upon Hawai‘i Clean Energy Initiative’s goal of meeting Hawai‘i’s energy needs of 70 percent renewable by 2030.

Many residents on Lana‘i, however, call this proposal, conceived by billionaire David Murdock (who has owned most of the land on Lana‘i since 1985) and Gov. Linda Lingle, a simple case of “green greed.”

The original development plan was to study the wind force for two years, place up to 200 turbines in the Ka‘a ahupua‘a, then cash in on substantial State and federal tax subsidies, as they have with the recent La Ola Lana‘i solar farm.

First Wind, the developer of Kaheawa and O‘ahu’s recently-approved Kahuku industrial power plants, soon announced it wanted to compete by developing a similar project on Moloka‘i. To avoid the inevitable litigation that would have ensued by the party not selected to supply the power, HECO brokered a compromise: Each developer would be permitted to provide 200 MW each, and if either party failed to perform, the other could pick up the balance.

Regardless of which developer, or both, gets a piece of this pie, the State would then connect those turbines to a 70-mile undersea cable to send all the wind-generated power to O‘ahu ... and only O‘ahu. None of the power generated would feed into Lana‘i’s grid—thereby delivering 10 percent of O‘ahu’s current electrical power needs. Lana‘i currently uses only 5 MW per day, O‘ahu uses approximately 1400 MW per day.

Murdock initially wanted to build and own the undersea cable as well, but the State nixed this plan in favor of financing, through rate and taxpayer funds, the $1 billion needed for the cable alone.

The footprint of this proposed project for Lana‘i is huge: It could consume over 22,000 acres of land and would permanently alter one-quarter of the island. After feeder roads are graded and leveled along Lana‘i’s north end ridge, mammoth holes would be dug to plant about 170 turbines—each as tall as Oahu’s First Hawaiian Bank building. Each turbine will be built on a concrete pad 60 feet in diameter, and will use over 3 million pounds (1125 cubic yards) of cement.

Short term construction jobs (about 250 for around 18 months) and long term jobs (about 20) may utilize some Lana‘i workers. But the effects on the island is astronomical.

Contrary to the Castle and Cooke’s characterization of Ka’a ahupua’a, the designated quarter of Lana‘i is an area rich with cultural, historical, and archeological resources, and is a prime hunting and fishing area, not only for Lana‘i residents, but for statewide hunters and fishermen.

Hawaiian Electric Company (HECO) prepared this illustration to demonstrate how much land would be needed for a comparable industrial wind power plant on O‘ahu (in green): 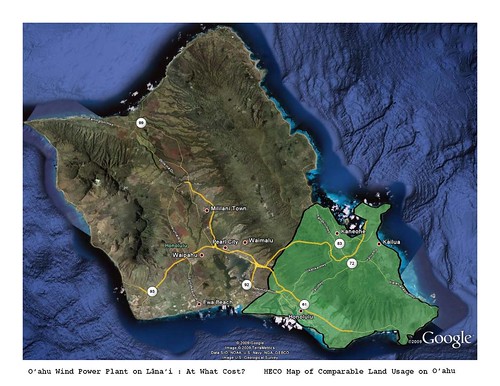 The problem. Hawai‘i depends on fossil fuels to meet over 90 percent of its energy needs. Of that, 30 percent is used for generating electricity. The rest is mostly for transportation needs. The Lingle administration set a target of having 70 percent of Hawai‘i’s energy needs come from renewable sources by 2030.

How is Hawaii going to do it? The State Department of Business, Economic Development, and Tourism (DBEDT) recently contracted with continental U.S. firm AECOM to develop the inter-island cable EIS. This will include the required Federal EIS (NEPA), along with a Programmatic EIS that integrates the three independent EISs put together by the developers—Castle and Cooke for Lana‘i, First Wind for Moloka‘i, and HECO for O‘ahu.

How much is it going to cost? Two years ago, DBEDT estimated that the inter-island cable would cost taxpayers and/or ratepayers $1 billion. Castle and Cooke and First Wind have estimated that components of the project would cost between $750 million and $1 billion on each island—or $2,300 for every Hawaii resident before a single shovel touches Hawaiian soil.

Who are the players? The State will likely end up owning the inter-island cable and be named on the permit applications. Mineral Management Services of the Department of Interior, the agency that granted the permits to BP for their Gulf oil well, is the federal permitting agency vested with the authority to issue an Ocean Floor Right-of-Way grant to lay the transmission cable in federal waters. The Army Corps of Engineers has permitting authority in State waters. 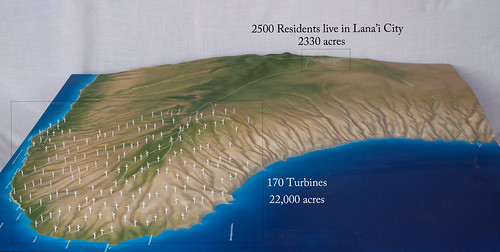 The questions everyone must consider are: Is this a good project for the State? Is it for Lana‘i? Is it the best way to spend $3 billion dollars?

More questions: What about natural and environmental impacts? What about the endangered birds that live up on Lana‘i Hale and fly through the proposed project area?

One preliminary study estimated that annual movement rates for the endangered species U‘au (Hawaiian petrel) through the North End area, which is slated to house about 170 turbines, numbers in the thousands. It is also estimated that virtually all of the U‘au are flying at altitudes low enough to interact with these turbines. There has been no study conducted to date that understands how the U‘au will behave when they fly in and around 250’ tall towers, each with 3 rotating wings of 150’ lengths.

The proposed oceanic cable will also be laid right through the Hawaiian Islands Humpback Whale National Marine Sanctuary. Lana‘i is the only Hawaiian island completely surrounded by the sanctuary. 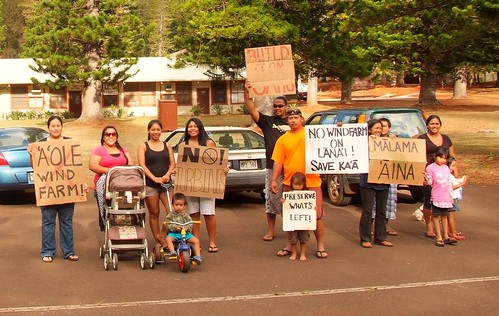 A group called Friends of Lana‘i was recently formed to give voice to residents who strongly oppose the O‘ahu industrial wind power plant on Lana‘i, many of whom are fearful for their jobs and can’t speak out for themselves.

Friends of Lana‘i is not opposed to renewable energy, and despite comments from O‘ahu critics, this is not a simple NIMBY protest. It’s a realistic examination of the project’s substantial weaknesses and significant challenges.

There is no guarantee that any of the enormous profits created by a project of this scale would stay in the state, or on Lana‘i.

The project simply encourages more supply for O‘ahu electricity users, rather than encouraging conservation and managing demand. The project sets a precedent for using the “Neighbor Islands” as an industrial park for O‘ahu. What would prevent O‘ahu from planting additional wind generators—or storing garbage—on Lana‘i?

Is providing 10 percent of Oahu’s electrical needs sufficient to offset the destruction of one of Hawai‘i’s last untouched landscapes? Think about it.