Systemic economic inequality is a problem that we have not done a great job of addressing. The documentary Inequality for All attests to that with painful clarity. CEOs make 350 times what their average worker earns but we cannot summon the will or courage to raise the minimum wage? Where is the shame?

But perhaps right now, right here in Hawaii, we may be able to end another kind of inequality.  We have enough public support. We appear to have potentially enough votes in the legislature, to make this effort to finally give LGBT families equal standing in the civil institution of marriage an attainable goal. And it could help address some of the forms of social marginalization, hardship to children, and economic cost that institutionalized discrimination fosters.

It is disheartening to see this kind of discrimination fostered by some faith leaders. Just this year we have had reports of several firings of Catholic educators and administrators who had been in long-term relationships.

News reports suggest that the individuals concerned were fired only after their long- standing relationships or sexual orientation became public. Apparently, if you carry the “sin” of your sexual orientation quietly, keep your head down and never publicly acknowledge the person with whom you have chosen to live in a committed relationship, the church can tolerate that.  Go public, and you’re fired.

If it was tolerated when secret, what makes being LBGT unacceptable when discussed in the light of day? Isn’t this the mentality that led to years of cover up of the sexual abuse of minors?  The church did not lead the fight to root out predatory priests.  It was forced to deal with it when victims finally spoke up publicly. Civil authorities led the investigation of the abuse and forced everyone involved to confront it.

This is David McCollough(left) and John George Roth. They entered into a civil union in early 2013 and are building a life together on Hawaii island. 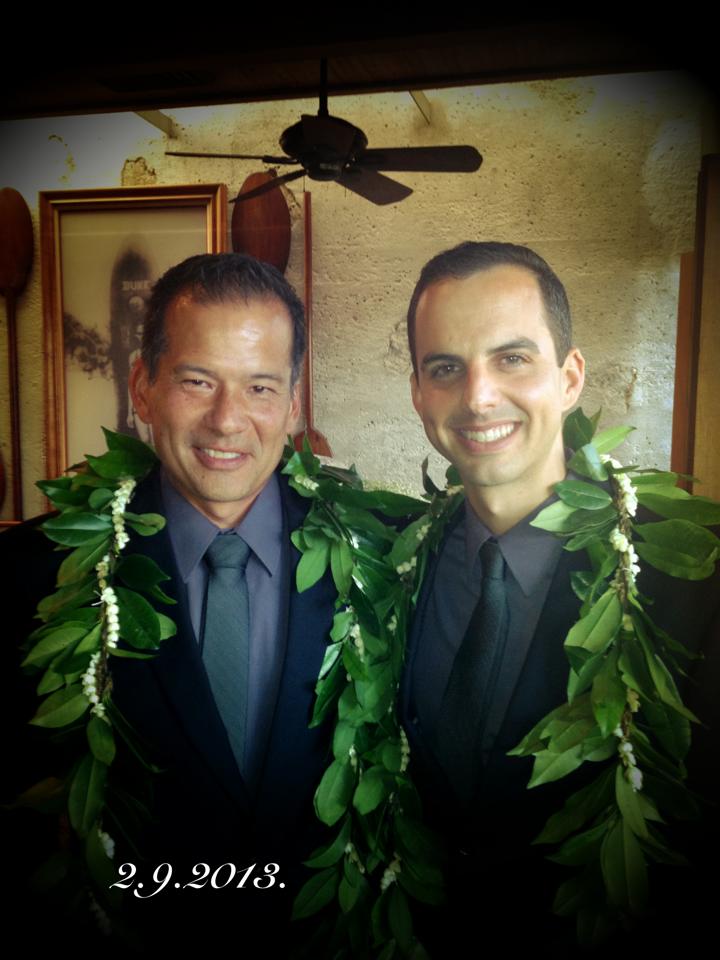 John’s parents, Susie and Randy Roth are seen here, accompanying him on the occasion of his civil union with his life partner, David McCollough. The church should be encouraging families to give their children this kind of loving support. 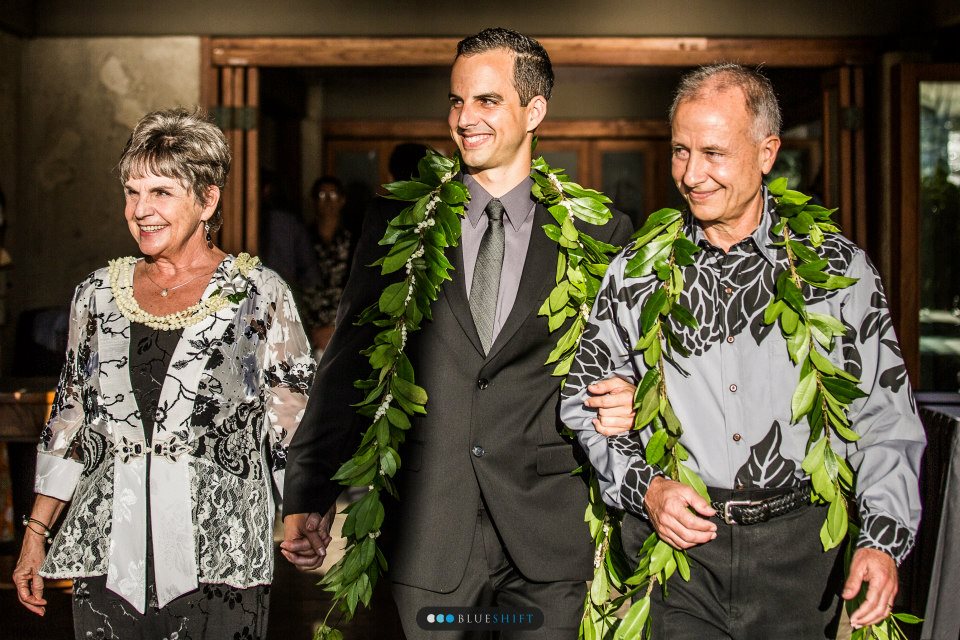 Children pay a painfully high price when their families turn against them simply because of their sexual orientation. The cost is borne by the entire community in greater homelessness, higher rates of suicide, problems coping with school and with getting the education and skills to live happy, productive lives.

This is Suzanne (left) and Tambry Young with their daughter Shylar, on vacation in Boston. Denied equality in Hawaii, they got married in Massachusetts in 2009. Theirs is a committed relationship of almost 33 years.  Shylar is a happy, well- adjusted, talented adolescent. She too wants equality for her mothers. 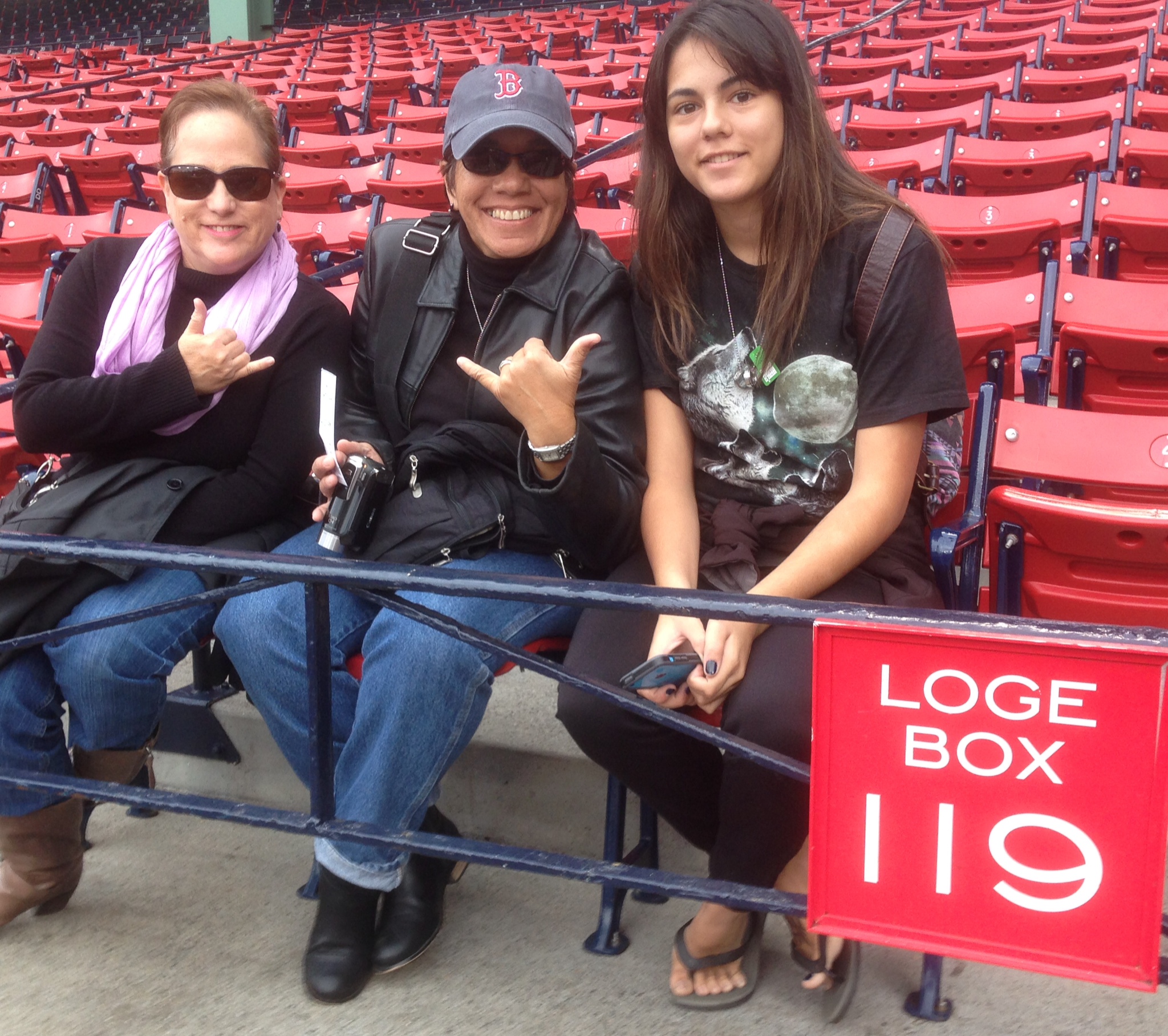 We all have friends, colleagues, neighbors or family members whose sexual orientation may be at odds with the beliefs that are dispensed in church.  But we, the people in the pews as well as the ones who may or may not attend church regularly but who never abandon their Catholic identity: we are the Church.

Observant or not, Catholics everywhere will tell you that they never ever quite shed what makes them Catholic.  It is an inextricable part of how we define ourselves. It shapes how we think and see the world. That thinking may change over time. We might not agree with all of what passes for church teaching but we never quite shake the sense that at the heart of the Gospels lies a call for justice for all. It is a call that we may not always hear or heed, but it is always there.

Those who feel torn by a sense of guilt at being at odds with what some church leaders want us to believe should find comfort in the words of Pope Francis. He has been clear in reminding us that to be church is not necessarily to identify with everything that is said at the pulpit. He has reaffirmed the place our own conscience has in our decision-making, in how we discern right from wrong.

To be church is to be a pilgrim. Always a pilgrim, on a journey to a place of greater sweetness, of greater light and love and hope for all, not just ourselves. To be church, said Pope Francis recently, is to “heal the wounds.”

If we believe in a God of Creation, this would be a good time to stop demonizing those we do not understand or identify with. We cannot say He made us all in His likeness and still treat some among us as if they are inferior and unworthy. St. Ignatius of Loyola said we should see God in all things. Clearly, God chooses to make Himself manifest in all the shades of the rainbow.

If He does not have a problem with that, why would we?

It’s taken us a while to get here. But it’s time to make marriage equality happen in Hawaii. This particular area of “inequality for some” we can fix.