Banner Image: Hālau Kū Māna New Century Charter School is a product of visionary educators who sought alternative approaches to education that was grounded in the Hawaiian culture, community and ʻohana.

It’s Monday morning and my 12-year-old son wakes me up because he thinks I’m behind schedule and he doesn’t want to be late to school.  He goes through his morning routine, checking on my progress once in awhile. He barks out, “Mom!” if he feels I’m moving too slow. As I’m driving him to school, he looks back and forth between me and the clock frustrated because I’m not moving faster. And I literally have to explain to him that I can’t drive over the cars in traffic just so that he can get to school on time.

Looking back on my days as a reluctant student, being dragged to school by my mom “against my will,” all I can think is, “wow, things have really changed. Public education is no longer a one-size fits all deal.”

He’s only 12 years old, but my son’s enthusiasm and excitement about going to school has been cultivated through decades of hard work by visionaries; educators who recognized a huge hole in the school system and filled it with research-based and community-driven, culturally relevant approaches to education.

My son’s school, Hālau Kū Māna (HKM) New Century Charter school, located in central Honolulu, is a product of these visionaries, along with 16 other public Hawaiian Focused Charter Schools (HFCS) in Hawaiʻi. They help fill the need for holistic approaches to education where parents, students, governing board members and teachers play an active role in meeting the diverse learning styles and needs of students. And their results are transformative.

My son was a quiet, hardworking student when he attended a traditional Department of Education (DOE) school. However, since transferring to HKM three years ago, he has found his voice and is part of a learning ʻohana outside of home. Historically, Hawaiian students have had limited success in the standard public school classroom. They have some of the lowest retention and educational attainment statistics in the state. But HFCS represents a unique opportunity to build upon the strengths of students by connecting them with their culture, and to forge a new path toward educational success aboard the same canoe. Recently, though, HFCS stakeholders became aware that this canoe might be in jeopardy of being hijacked by an outside, politically-focused entity.

Because the HFCS system receives, at most, 60 percent of the per-pupil funding that traditional DOE schools receive from the State of Hawaiʻi, funding has always been an obstacle that the resilient HFCS have always managed to overcome. Since at least 2004, the Office of Hawaiian Affairs (OHA) has played a pivotal role in the success of these schools, providing the HFCS with millions to help make up for the shortfall in the per-pupil funding. OHA was created for the betterment of native Hawaiians and its funds are desperately needed for HFCS. Many of these schools do not serve lunch and have no permanent facilities. Because approximately 80 percent of HFCS students are of Hawaiian ancestry, OHA usually provides funds through the fiscal sponsorship of Kanu O Ka ʻĀina Learning ʻOhana (KALO), an organization with over a decade’s experience working with and for HFCS statewide from the ground up.

On September, 6, 2017 many HFCS parents, watching an OHA Community meeting in Kona, found out that the 1.5 million dollar OHA grant for these schools was awarded to the Council for Native Hawaiian Advancement (CNHA), a non-profit with a loaded political agenda. With the unveiling of this information, OHA Chair Collette Machado expressed shame and claimed to be “hoodwinked” into approving monies for CNHA. CNHA’s mission, which is to “enhance the cultural, economic, political and community development of Native Hawaiians” makes no mention of education anywhere. Many Charter Schools are opposed to CNHA receiving the OHA grant on their behalf without having consulted with HFCS stakeholders. In a recent school wide letter to parents, HKM Principal, Brandon Bunag, stated:

As an organization, CNHA has been absent from ongoing discussions and advocacy and out of touch on our priorities as a collective. I, along with many other Hawaiian-focused charter school poʻo [principals], are concerned that should this contract between OHA and CNHA be finalized, we will be forced into a relationship with an organization that is not aligned with our values as a school and is ill-equipped to advance Hawaiian education.

With this news, some HFCS parents and staff have begun to organize and voice opposition to CNHA holding the purse strings for 17 schools, putting the educational success of 4,223 students into the hands of an inexperienced, politically charged organization. Hundreds of letters are being sent to OHA Trustees and the Chief Executive Officer asking them not to finalize the grant and to review the awards process. The concerns are not only with the misalignment of visions and missions, but the lack of trust when dealing with an organization that has not bothered to build relationships with many of the schools they plan to “serve.” CNHA’s expertise in the culturally responsive education provided by our Charter Schools is non-existent.

As both an educator and a parent, this unbalanced, uninvited partnership between HFCS and CNHA causes me concern on two levels. The first is that, as noted, CNHA has no experience in dealing with education. But the second is that the way in which CNHA has gone about inserting itself into the realm of education mirrors the way the organization has forced many Hawaiians to submit to its agenda of federal recognition. As a parent, I worry that the future of my son’s education, and that of thousands of other students enrolled in HFCS, will be held hostage by CNHA by tying the futures of these keiki to its long-standing political agenda of advancing federal recognition.

The fear-mongering and hostage-style tactics the CNHA has used within the Hawaiian community are well documented. In August 2014, the Native Hawaiian Education Council (NHEC), which is authorized under the Federal Native Hawaiian Education Act (NHEA), was pressured by a CNHA representative into supporting the proposition of a Department of Interior (DOI) Rule that would create a pathway for a federally recognized Native Hawaiian nation. A NHEC representative was literally threatened: told that, without such a rule, funding for NHEC would disappear, and future advocacy (real or imagined) by the CNHA for NHEC to receive funds would stop. The council did not budge on its democratically agreed upon decision to not take a stance on the DOI Rule and decided instead to remain focused on their educational mission which is to “provide guidance and direction of Native Hawaiian resources to government agencies.” Despite threats of losing their funding by the CNHA, the NHEC continues to receive their annual funds authorized by the NHEA.

The cloud of community mistrust that hangs over the leadership of the CNHA came about after years of such shady tactics and activities—from secretly working for an oil lobbying non profit, Arctic Power, to building vacation rentals under the guise of community-based recreational purposes. On May 10, 2013, the Department of Hawaiian Home Lands (DHHL) sent then-CNHA CEO Robin Danner a cease and desist letter for construction of illegal structures and rental activities at the Kumu Camp project in Anahola, Kauaʻi, built on Hawaiian Home Lands. The violations cited in that letter included failing to pay DHHL for the use of their water meter, failing to apply for a county zoning/building permit and offering the camp for “other uses than was intended.” And now we are being asked to trust them with $1.5 million in Hawaiian Charter School monies? 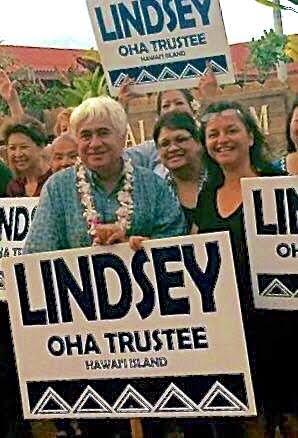 Although I may not agree with CNHA’s politics and tactics, there can be no doubt that they have made a huge impact in the Hawaiian community in many areas. However, something smells fishy when the CNHA is awarded an HFCS grant instead of an organization such as KALO, which has a long history of serving the HFCS well and a mission and vision that is aligned with HFCS. With no consultation with HFCS parents or schools, CNHA applied and was granted 1.5 million dollars of OHA monies that are crucial to the success and survival of HFCS. This puts an already venerable population at risk.

As an active parent of a Charter School student, my concern is for the educational attainment and overall well-being of Charter School students like my son, who have found joy in learning through the progressive and relevant approaches to education, which are HFCS’s strengths. The future of our children’s education is too important to put in the hands of the CNHA, an organization with a history of using less-than-savory means to achieve their political ends. If they are allowed to take control of these monies, those means could include holding Hawaiian education hostage.

M. Healani Sonoda-Pale is a parent of a Hālau Kū Māna New Century Charter School student and an educator currently working at the University of Hawaiʻi at Mānoa as a Student Support Specialist. She resides in Kuliʻouʻou on Oʻahu with her husband and two children.