The invitees for this year’s scheduled Quicksilver In Memory of Eddie Aikau surf contest at Waimea Bay were recently announced and hopes are high for some big waves this winter. An Association of Surfing Professionals (ASP) specialty event, Quicksilver chose just 28 of the world’s best surfers and big wave riders. The contest also honors eight surfers who have passed away, including Hawaii surfer Andy Irons who passed away earlier this month. The event will be held on one day only any time during the holding period between December 1, 2010 and February 28, 2011, when waves reach the 20-foot minimum required to hold the contest.

A $98,000 prize purse waits for contestants—if the contest is held this season. The “Eddie” has been held only eight times in the last 25 years due to insufficient ocean conditions and wave size.

The 2010 opening ceremony is scheduled for 2:30 p.m. on December 2 at Waimea Bay. The surfer who takes the most radical drop of the contest will receive the Monster Drop Award offered by Monster Energy, which was won last year by Ramon Navarro from Chile.

The contest honors North Shore waterman and lifeguard Eddie Aikau who loved surfing Waimea’s big waves, and dedicated his career to rescuing people who got sucked out to sea. Aikau had a passion for riding big waves, but eventually became interested in joining a crew in a voyage on the Hokulea, a traditional double-hull canoe that would be making the journey from Hawaii to Tahiti. Aikau was chosen to be part of the crew who would make the trip to Tahiti using traditional celestial navigation in March of 1978. The trip was to be a 30-day, 2,500 mile voyage across the Pacific, following the ancient route of Polynesian migration.

On March 16, 1978, the Hokulea departed and after a short time on the journey the canoe capsized during the night in the Molokai Channel. According to crew members, Aikau insisted that he paddle to Lanai which was estimated to be 19 miles away from the location of the fallen canoe. The Hokulea‘s crew was eventually spotted by a plane flying by but Aikau was never seen again. He was only 31 years old. 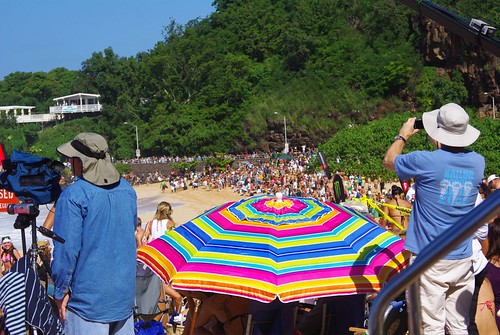 Aikau’s courageous story is honored each year, whether or not ocean conditions are met. And when the contest does go live, it’s surfing’s pinnacle event.

At last year’s In Memory of Eddie Aikau surf contest, the high number of spectators completely stopped traffic along Kamehameha Highway, with numerous North Shore residents renting out any space they could for parking around their homes for $40. Cars were parked in every nook and cranny, almost in people’s yards, on private roads, and on small stretches of grass between the bike path and Kamehameha Highway. Locals had hot dog booths, food stands, and were selling T-shirts on the side of the road. Near Waimea, contest goers were lined up, peering over resident’s driveway gates to get a view of the waves. On the east side of the bay by the cement wall, the crowd was thick with visitors and their cameras. Some North Shore residents had to ride their bikes to and from work in Haleiwa in the mid-day sun to avoid the traffic.

If 20-foot waves arrive this year and the contest is a go, remember to bring a bicycle or skateboard, or maybe just watch from home at Quicksilver.com/Eddie. It’s sure to be a crowded day again.