HONOLULU—Friday night, The Hawaii Independent spoke with Susana Hitorangi, the wife of journalist Santi Hitorangi, whose family is fighting to reclaim their ancestral lands from a Chilean developer. Susana is currently located in New York but has received these communiques from her husband, who is on the island and was injured in yesterdays attack on native rights activists by Chilean police.

Contrary to earlier reports that stated the police and troops used rubber bullets, it has been determined that pellet bullets were used instead.

A surgical team is said to be flying in to tend to the injured but hasn’t arrived yet. One man, Richard Tepano, has been shot in the eye and is unconscious as of December 3. He is situated in the local hospital, but the facilities are inadequate to treat him.

The President of the Rapa Nui Parliament, Leviante Araki, is also badly injured with possible internal injuries and is not fairing well, especially due to his older age.

Fifty more troops were recently flown in from mainland Chile, reportedly with machine guns of unknown kinds of ammunition.

Families there say there is no one to turn to for answers regarding future actions by the Chilean government. The only hint that something like this was going to happen came from the island’s governor yesterday, who stated that if the families did not vacate the properties, there would be violence. Susana noted that threats like these have been made before without the kind of action taken Friday morning. The level of violence perpetrated against the Rapa Nui people today was a “totally unexpected occurrence,” Susana said. No one expected shooting.

Susana described a “sense of panic,” and said these unarmed families are still standing ground on their ancestral lands and are unified. She stressed that the actions by the Chilean government are severe human rights abuses and encourages the media and other countries to get involved. 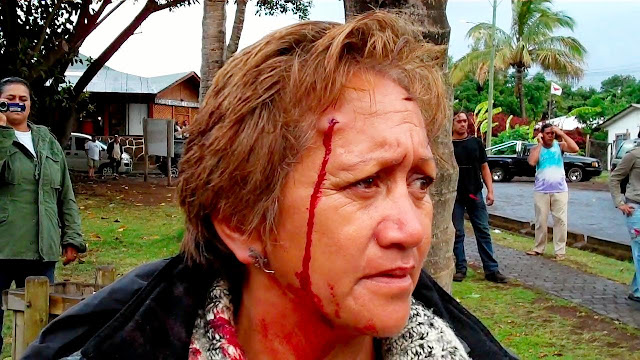 Verbatim: ‘The unarmed Rapanui people are determined not to be removed from their lands’