NORTH SHORE—A new crop of farmers are learning to navigate a historically difficult path to sustainable agriculture in the islands.

Like many of Hawaii’s young farmers, Meleana Judd is optimistic of Hawaii’s food future, but is also cautious and meticulous in the details of her literally up-hill battle to make ends meet.

Driving the length of Judd’s farm in Pupukea requires you to scale up the mountain it settles up against. It becomes a steep incline, particularly as you get toward the house way in the back. And it’s not without its aches.

“People who’ve been around here a while swear they lose weight from just walking up and down,” Judd says.

But what’s a real bother are the pigs that frequent her fields and harass her ground cover (her traps have yet to catch one.) As for those pesky stray chickens that scratch around for seeds and grub? She replied, “The first chicken I ever cooked, let alone killed, was a wild chicken visitor.”

Since Judd and her father purchased the three-acre property nearly four years ago, the new farmers have been busy getting the place up to productivity. Once a horse stable overgrown with thickets of cane grass and haole koa, the place is now awash in organically grown greens and fruits, the variety of which is impressive, although nearly mandatory for an enterprise like Judd’s. She operates a community-supported agriculture (CSA) program, which Judd started at the end of 2009.

According to the U.S. Department of Agriculture, a CSA program consists of a community of individuals who pledge support to a farm operation so that the farmland becomes, either legally or spiritually, the community’s farm, with the growers and consumers providing mutual support and sharing the risks and benefits of food production.

Typically, members or “share-holders” of the farm or garden pledge in advance to cover the anticipated costs of the farm operation and farmer’s salary. In return, they receive shares in the farm’s bounty throughout the growing season, as well as satisfaction gained from reconnecting to the land and participating directly in food production. Members also share in the risks of farming, including poor harvests due to unfavorable weather or pests. By direct sales to community members, who have provided the farmer with working capital in advance, growers receive better prices for their crops, gain some financial security, and are relieved of much of the burden of marketing. 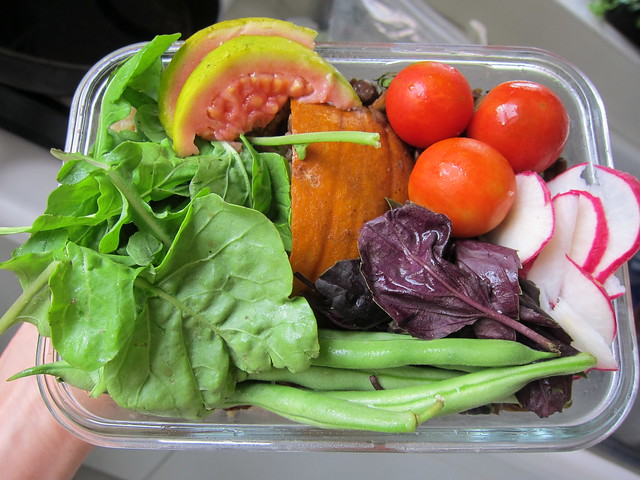 A good variety of organic fruits and vegetables gives Judd a lot of options, particularly in the case a crop happens to go awry. Plus, people who join CSA’s in general like a bit of variety; it keeps things fun and interesting.

Just a few of things presently cultivated at Judd’s farm are sweet basil, fennel, pineapple, sweet potato, cowpeas, bananas, chards, and tomatoes, for starters. Then there are the more unique items (and previously unknown to me): Cuban oregano, chaya (tree spinach), and Malabar spinach, to name a few.

Although she’s just 29 years old, Judd has had a relatively long relationship with agriculture. She started tending to plant nurseries in high school, took botany classes in college, and even apprenticed at an intensive permaculture centre at the renowned Djanbung Gardens in Australia.

Still, there’s nothing quite like starting a farm from scratch. It took a year of renovating existing structures, another dedicated to clearing brush, and then several months of applying compost to all corners of the parcel. (Organic fruit cultivator Charles Boerner, of Ono Organic Farms on Maui, paid a visit on the same day as my visit and recommended even heavier applications of the cow poop mixture to vitalize her fruit tree saplings.) So it makes sense that Judd’s always on the hunt for compost. 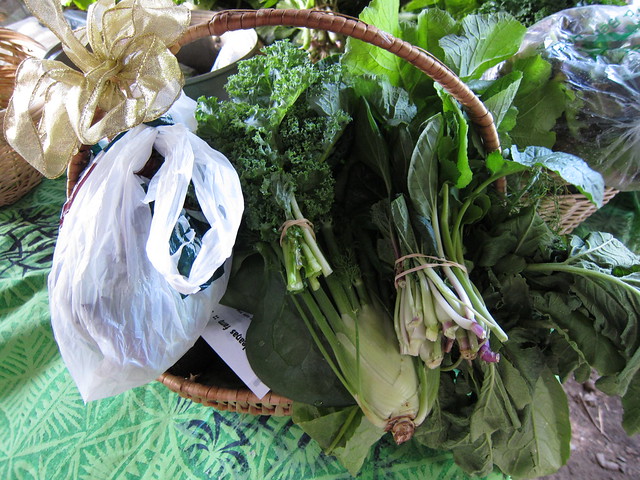 In a follow-up email exchange with The Hawaii Independent, Judd recalled that when the CSA first started, she distributed the weekly goodies in buckets, hoping that customers would return the next week with a healthy pile of organic scraps. “That didn’t work for many reasons,” she wrote. Judd moved on to baskets, which, she happily noted, are cheap, cute, and prevent the produce from bruising.

And when Judd is not getting a handle on bugs (what farmer isn’t?) or migrating her baby goat “Getmy” around the hills for natural weed control, she’s looking for more ways to fund farm projects. Judd is awaiting word from the U.S. Department of Agriculture’s EQIP program on whether she’ll have some financial assistance to buy mulch as well as plant more banana trees for use as windbreaks. (If you’re a new farmer, EQIP is for you.)

“We can’t afford what we’re doing,” she says with a flat humor.

Truth be told, her family’s property rentals do keep her afloat. But, she explains, starting a farm isn’t easy, particularly during the first few years when infrastructure costs can be excessive.

Judd is not deterred, however. She’s counting on her CSA subscribership to grow (it’s up to 15-strong now) and eyeing to score some restaurant accounts. But, of all her ventures, she’s most excited about starting up a co-op in Pupukea.

“This area has a lot of potential for farmers, and people already have all kinds of things growing in their backyards,” she says. “We have an incredible opportunity to build a local food shed here.”

If you’re interested in subscribing to Meleana’s CSA (which also features items from other nearby farms), interning, ordering particular produce for a family party, dropping off compost, or keeping yourself informed of upcoming events, check out www.meleanasfarm.com or contact Judd at [email protected] or (808) 551.8132. 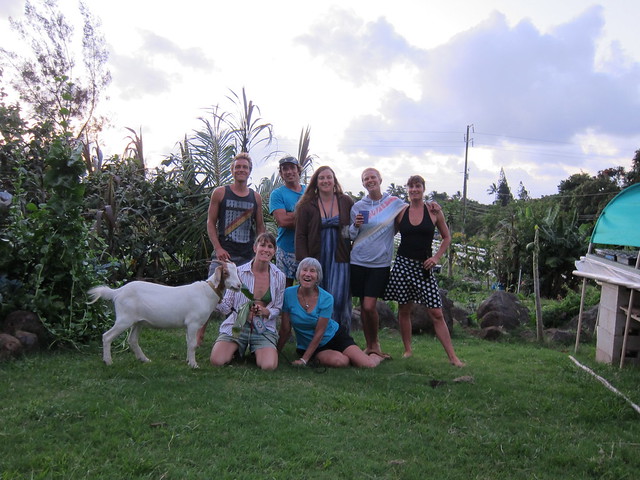