HONOLULU—As hundreds of Hawaii residents filled the grounds of the State Capitol bearing signs, crosses, and flags to convey their messages, lawmakers officially kicked off the 2011 Legislative Session in front of hundreds more.

With no leadership officially in place yet, Rep. Mark Nakashima presided on the House side. Kamaki Kanahele gave an invocation acknowledging the tension left between House members loyal to Rep. Calvin Say and dissident Democrats who were backing Rep. Roy Takumi for Speaker.

Kanahele compared the House lawmakers to parents, whose job it was to find jobs, put food on the table, and make sure the money is spent properly for Hawaii’s people. “The House cannot be divided,” Kanehele said, if the important issues facing the House’s constituents are to be resolved.

In the Senate chambers, President Shan Tsutsui, replacing now-Congresswoman Colleen Hanabusa as the head of the Senate, remarked that “better days are ahead” for a state that must tackle a massive budget shortfall to the tune of an estimated $843 million through June 30 and over the next two fiscal years.

In seeing the State through to economic recovery, Tsutsui lamented against levying excessive taxes on local businesses. He touted the importance of sustainability and diversifying the economy. To that end, lawmakers would work with agriculture leaders to increase the viability of farming in the islands.

With hope and teamwork, Tsutsui also said the State would maintain vital government services for the children, the elderly, and others in need. Infrastructure maintenance would commence for roads, hospitals, harbors, and airports. School furloughs would also be a thing of the past.

Working with Native Hawaiians to address land claims was also high on the president’s list. “Let us work with stakeholders and move forward on a ‘ceded lands’ settlement to fulfill our responsibility to the native Hawaiian community,” Tsutsui said.

In reaching these goals, the president said politicians should exhibit the qualities of compassion, sacrifice, and a desire to make things better. He said it should be about “coming together as one ohana” and that it shouldn’t be about “pitting one against the other or about the haves and have-not’s as we prepare for better days ahead.”

Then came the “Lone Ranger”: Sen. Sam Slom, the State’s only Republican senator. Topped with a cowboy hat and a brandishing an electronic talking horse broomstick, which drew laughter from the crowd, he emphasized his party’s ideals of “independent risk and accomplishment.”

Offering his ideas on economic recovery, he emphasized fewer taxes and burdens on businesses. He also advocated for more budget cuts that coincide with less dependence on federal stimulus dollars, which he says are only contributing more to the national debt.

“The difference [from the Democrats],” he said, “is that the party I represent believes each individual should succeed without the yoke of government.”

Regarding Native Hawaiian restitution, Slom said discussion should happen openly at the State level “as opposed to the closed doors of Washington D.C.”

Closing the Senate ceremony were well-received performances by the Kamehameha Schools children’s chorus, The Society of Seven, and Willie K. 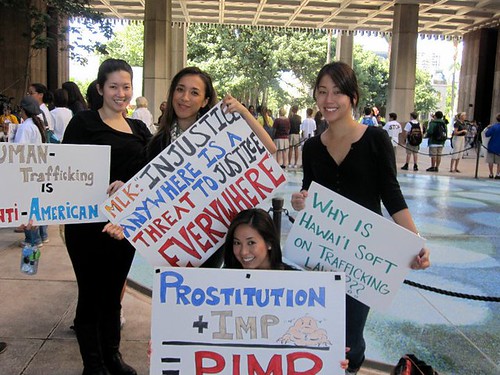