HALEIWA—The North Shore community congregated once again last week to discuss the possible sale of City and County of Honolulu land, intended for a regional park, in order to make way for a new development.

Developer Andy Anderson plans on buying a piece of property where Jameson’s By The Sea Restaurant stands today in Haleiwa, mauka of Kamehameha Highway, to build an 80-room hotel on an approximately 24,000-square-foot lot. The hotel would be an exact replica of the historic Haleiwa Hotel. Anderson said he would also deed over approximately two acres to the community for a park.

On the another side of the discussion is Kamehameha Schools, which has also shown interest in buying the property to build a community park.

The special North Shore Neighborhood Board meeting last Wednesday discussed the possibilities of selling the property to Anderson or to Kamehameha Schools.

North Shore Neighborhood Board chair Michael Lyons opened the meeting, setting guidelines for community members who wished to speak. He said each person had a limit of “one minute to speak” and advised everyone to “be respectful, listen, and learn.”

Lyons’ reminder of etiquette was in hope to avoid a situation similar to a board meeting back in September, when Peter Cole of Save Haleiwa Beach Park Coalition spoke out of turn, resulting in the meeting being called to an end abruptly.

Giorgio Caldarone from Kamehameha Schools spoke first, describing the school’s proposal for a community park. Caldarone said the school would like to purchase the lot from the City, consolidate it with other property in the area the school owns, and open approximately two acres for a park. Caldarone said they would give the park to the Trust For Public Land, a national, nonprofit, land conservation organization that conserves land for people to enjoy publicly.

According to Caldarone, Kamehameha Schools would donate $200,000 to develop the parcel if they were able to purchase it.

“The property is very important,” Caldarone said. “It gives access to the [Loko Ea fish pond].” A picnic area and a place for music events would also be on the property, he added.

Gary Cabato, acting director of the Department of Parks and Recreation (DPR), said he was in attendance to listen and provide information to Mayor Peter Carlisle to determine if the land is going to be sold, and who it would be sold to. Cabato said it would cost millions of dollars to construct a park on North Shore’s wetlands, and that the City doesn’t have the money.

Anderson opened his one minute introduction by saying “we thought we would be hugged and kissed” when first coming up with the idea for the boutique hotel. Although Anderson plans to construct what he calls and “exact replica” of the hotel, one notable difference is the size. The new hotel hotel will feature an increase from 40 rooms in the original hotel, to 80 rooms in the new one.

At a closed-door North Shore Chamber of Commerce meeting last October, Anderson said: “Eighty rooms is arbitrary, 40 rooms just won’t pencil out. No one’s going to build a 40-room hotel this complex.” Anderson explained that after purchasing the lot Jameson’s restaurant currently sits on, his team realized that the hotel would not fit on the property unless they set it five feet from the road, something they don’t want to do.

Anderson made one final appeal to the community during the Neighborhood Board meeting last Wednesday by reminding the audience that his plans involve turning approximately two acres not used for the hotel into a community-owned park.

“The property would go to an entity to be created, a community non-profit that doesn’t yet exist,” Anderson said. “It could be used for luaus, weddings, an open market.” He added that the property would be fully given and deeded over to the community entity, and compared it to an already existing community park on Oahu that serves the same purpose.

Anderson noted the City mandated that he build 30 public parking stalls, a crosswalk, and a walkway that would cost him $800,000.

At the end of his minute, Anderson said, “We believe this hotel is paramount to the future of Haleiwa,” and that if built, the hotel will employ 110 people.

Peter Cole of Save Haleiwa Beach Park Coalition, a group of community members opposed to the hotel, approached the microphone and apologized for “losing his cool” at the last meeting for speaking out of turn—causing the meeting to being shut down. Cole then expressed his opposition to the hotel, saying: “If the land is good enough for a hotel, it’s certainly good enough for the public who owns the property.”

Community members, most expressing opposition to the hotel, also spoke at the microphone. Opponents cited increased traffic, flooding, tsunami, and “keeping the country, country” as reasons to not build the boutique hotel.

In response to flooding concerns, Anderson said the hotel would be 10 feet higher than the ocean, higher than Kamehameha Highway, which measures 8.5 feet above the ocean. He added that a rock berm would be constructed to avoid flooding from the swamp in the back.

Responding to resident’s concerns about traffic, Anderson said that with an estimated 50 percent of all visitors to Oahu driving through the North Shore, 80 rooms and cars “won’t make a difference.” However, he said that a traffic study would be completed.

One speaker asked Anderson how he could build a hotel in an area that does not have resort zoning. In response, the developer said that with the size of the hotel, resort zoning is unnecessary, but a conditional use permit would be needed and would also control aspects of the hotel such as room number and height. Anderson said this would prevent him from having the ability to sell the hotel to a big resort such as Marriott.

Although the majority of speakers expressed their opposition to the hotel, several community members said they support it.

One North Shore farmer said the hotel would assist true sustainability and that a hotel and restaurant would offer local farmers a new outlet to sell their produce.

A Waialua resident said she supported Anderson’s proposal, saying: “My family would love to stay there. I’m sending you good luck.”

The North Shore Neighborhood Board has yet to decide if they are in support or opposition of the hotel. 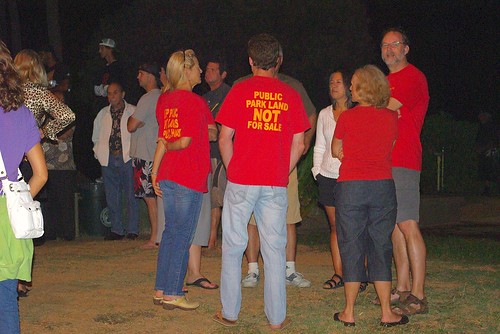