A forum to meet Mililani’s General Election candidates happened on Wednesday, September 22. The forum, moderated by Dan Boylen, will be scheduled to be shown on Olelo in its entirety. Check in at Olelo.org for details.

Here’s a wrap-up of what the candidates on hand running for U.S. Congress and the State Legislature had to say in order of appearance.

The first candidate to come out was State Senate President Colleen Hanabusa (D), who is running for the 1st Congressional District against Republican Congressman Charles Djou, who was unable to attend.

Ms. Hanabusa was first asked about how long the United States should stay in Afghanistan. She responded by saying that we should adhere to President Barack Obama’s timeline of withdrawal in 2011.

The next question was: “Aside from the creation of jobs, what is the most important problem?”

Ms. Hanabusa responded by asking, “How did we arrive here?” and noted the budget surplus under the Clinton administration. She faulted the Bush administration’s war and tax cuts as the problem with the deficit we have today. When pressed further about extending Bush’s tax cuts, Ms. Hanabusa said that allowing the tax cuts to expire, as intended when they were implemented, was the right thing to do for the nation’s highest income tax bracket.

Ms. Hanabusa was also asked about specific solutions to eliminate debt and responded by saying that we should go with Obama’s proposal for a committee to review the proper amount of debt for America to carry.

Soon after, Ms. Hanabusa was asked about the healthcare bill and intimated that she might be willing to “tweak it,” but that a full repeal would be a move in the wrong direction.

Bo Aki started by saying that he is a “concerned person who wants to make a difference, to make the community better.”

His first question was: “Is the GET tax too high?” Mr. Aki responded by saying that the GET tax hinders our ability to become a place to create opportunities for our community.

A funny situation ensued when he was asked if there has been any good legislation passed this year and he went silent.

Mr. Aki was asked about whether he supported House Bill 444 and said “Absolutely not.” He said that the benefits of House Bill 444 circumvented the intent for economic benefits to married couples.

Mr. Aki was also asked about the problem of attracting doctors to Hawaii. He responded: “Doctor’s want to work here, business wants to come here ... but we’re so anti-business, what do you expect them to do?” 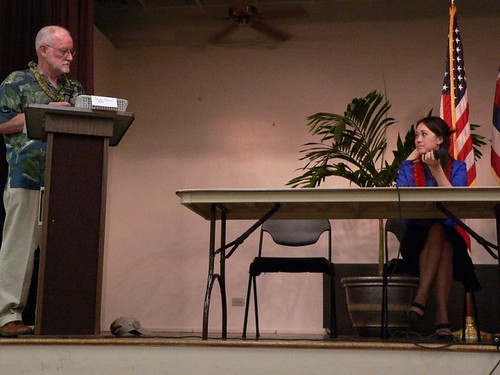 Beth Fukumoto’s opening statement highlight: “I decided to run after talking to people and found out that no one trusts our government anymore.”

The first question, addressed to both candidates, asked if we should raise the GET to balance the budget.

Ms. Fukumoto said she thought the GET was a regressive tax burden on the state and that “we tax the poor more heavily than any other state.”

Ms. Fukumoto said she would refuse to raise the GET and instead seek to prioritize budget obligations. She cited her experience working with the Legislature on the budget last year as a reason why she would be good for the job. When pressed further on whether or not they would raise any taxes, Beth indicated she would not.

Mr. Yamane said he agreed with the notion that the GET is a regressive tax and “is not a fan of” raising it unless as the last, ultimate resort. He stipulated that the only way it should be raised is if it was earmarked for the DOE and only as a short term fix. When pressed further on whether or not they would raise any taxes, Ryan said that he thought we should look at the entire tax system.

The next question, addressed to both candidates, asked what the most important problem we face today is aside from job creation.

Mr. Yamane said that it’s the economy. He indicated that he would look to the Economic Council of Revenue’s projected budget to determine whether or not the Legislature would face a deficit. Mr. Yamane said he thought the economy was already improving. He said that he feels agriculture, medical technology, and developing technologies are in the process of being used to create a better economy and that Hawaii should pursue expanding those fields further.

Ms. Fukumoto also said that the economy was the most pressing issue. She said that she had seen the Economic Council on Revenues’ forecast and that they predicted a $200 million deficit for FY 2011 and FY 2012. She questioned how an additional deficit could improve the economy. Ms. Fukumoto said that we need to diversify the economy, help to attract developing technologies, and create new industries.

Mr. Yamane was then asked why he co-introduced House Bill 444 (he then voted against it). Ms. Fukumoto was asked whether or not she would have voted for House Bill 444.

Mr. Yamane said that, as a social worker, he felt obligated to introduce a bill that he felt would help to protect persecuted individuals for hate crimes and indicated that he didn’t understand the full impact of the bill. He said that he wanted to use the “democratic process” to see whether or not the bill was a viable one but said that there were transparency problems with how the bill was put through and that he had heard from his constituency who apparently did not like it.

Ms. Fukumoto said that she would not have voted for House Bill 444, not because someone told her not to, but because she personally does not believe in it. Ms. Fukumoto also said that there were transparency problems. She also digged at Yamane’s apparent misunderstanding by saying that she thought the bill was a clear one, with a clear title and very short.

The candidates were then asked about lands for agriculture.

Ms. Fukumoto said that we should protect ag lands in the Mililani Waipio area and cited over-development as a problem in the region. She pushed the notion that we should support innovation in agriculture, along with the development of new methods of farming. She pointed out that countries in Asia, like Japan, could be used as examples for good policy.

Mr. Yamane said that he supports ag land and said that there are innovative programs with a wide range of crops. He said that Castle and Cooke was looking at new crops and ideas for development. He indicated that many agriculture innovations were in place already, and he would continue to support them.

Shawn Kawakami’s opening statement highlight: He said he would like to know “as a young father, what is our community going to look like?”

Marilyn Lee’s opening statement highlight: “Thank you for the honor of being a representative.”

The first question asked what their positions were on the affordable rentals proposal in Mililani Mauka.

Mr. Kawakami said that the proposal to add 1,000 units is not well planned and that the area is over capacity on infrastructure already.

Ms. Lee said “everyone is for affordable housing…but this development is in the wrong place.”

The next question asked about the possibility of a GET increase to balance the budget.

Ms. Lee said, “I was one of the people who spoke out strongly against a GET” because of the fact that it overburdens the poor and middle class.

Mr. Kawakami said that it’s a regressive tax and that we need to “look at areas to reduce government spending” because we already have enough hardship.

Ms. Lee said that her “Independence to Advance Practice Registered Nurses” bill was her favorite because it created many opportunities for nurses to care for folks in rural areas.

Mr. Kawakami said that he would lower legislators’ pay. He cited their 31 percent net increase in pay during a time of economic hardship and thought that it was too much.

When Mr. Boylen pressed Ms. Lee on the subject of pay raises, she said that the commission decided the pay raises, before the meltdown. She said that while none of the bills to lower wages passed to committee, she would have voted for them if they had.

The next question was about agricultural lands.

Mr. Kawakami said that we have a lot of land; it’s just not used effectively.

Ms. Lee said that we have good land use laws and that we should be very cautious in modifying them.

The last question asked about their positions on House Bill 444.