HONOLULU—Last weekend, Australian long distance ocean swimmers Chris and Penny Palfrey went for a swim—not the kind you or I might try: He swam from Molokai to Oahu; she made her attempt to navigate through the 72-mile Kaieiewaho Channel between Oahu and Kauai. He successfully completed his record-breaking 26-mile journey in 13 hours, but 35 miles into her swim, she hit a wall of man-o-war. Swimming through the searing pain and vomiting for over an hour, she finally capitulated and was pulled from the water. Strings of red welts wrapped around all her extremities and torso.

“It was sad after all the work and training she’d invested to come up short when it wasn’t anything within her that caused it,” says Chris. “I knew Penny could do it, she’s certainly capable. It was tragic to have an outside influence spoil the party.”

What’s not affected is how they are coping with the setback and in it are guidelines for their relationship’s success. Chris downplays his effort in support of Penny’s injuries and aborted swim. She beams about his new record. It’s clear that her disappointment is also his and that separate victories belong to both. Beyond moral support, this couple manages to do what very few married people would even find desirable: they live, work, and train together.

Channel swims are nothing new for the couple, although Chris spent many years as a triathlete before knee problems gave him reason to spend additional time in the water. When he began to excel at long distance swimming, he made the switch. That was good news for Penny; she has been swimming almost all her life. 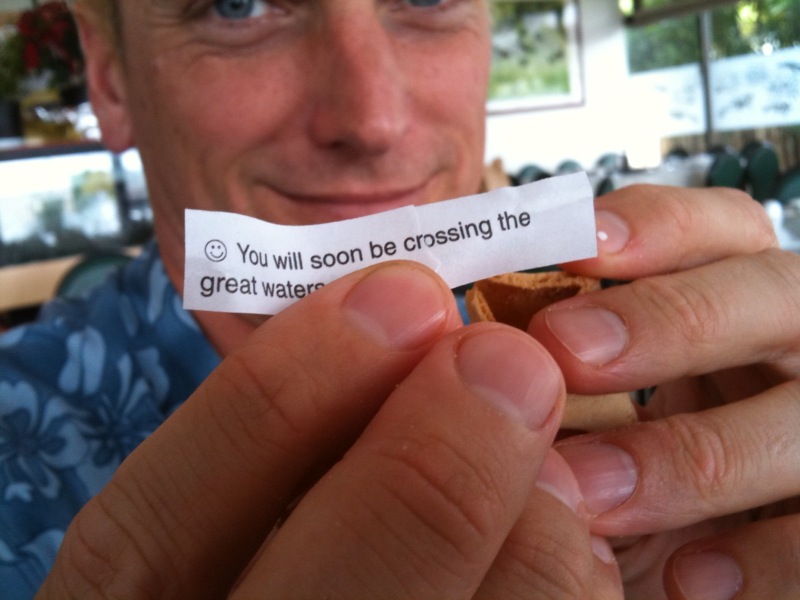 In 2007, they swam the Shark Fest from Alcatraz through San Francisco Bay. In September 2008, Penny became the first person to swim from San Miguel Island to the California mainland. Six months later, they were in Hawaii and she swam the Alenuihaha and Maui Channels—making her the second person and first woman to swim Alenuihaha. Last fall, she also became the first to swim from Santa Barbara Island to Point Vicente, California. Now Chris is the fastest person to swim the Molokai Channel.

The swims have gotten longer and more ambitious.

“Once I used to look out and wonder if I could swim to that dot across the way,” she says. “Now I need a map to plan my swims.”

The alarm goes off at five minutes past 4:00 a.m. They stretch, brush teeth, feed the dogs, and take them out. In separate cars, they head to the pool; he does 7K while she swims a bit longer—10K. Now that the three children are grown and Penny doesn’t have to dash the 30 minutes home to wake, feed, and get them off to school, both she and Chris meet at their office to check emails and have breakfast. He’s an accountant and owner of a small firm, which Penny oversees. The growth of the company over the past years has allowed her to step away during the afternoons for errands and more training: bands and weights at the gym. Then she’s home to make dinner.

“That’s our arrangement,” says Chris. “Partly because I don’t get home early enough to do so, though in all the years we’ve been married, I don’t think I’ve ever made dinner. And the way I cook, that’s probably a good thing.”

It may sound routine, maybe even a little mundane, but both say neither gets bored or a little more than occasionally cranky with the other.

“Every training session we do is miles in the bank for the big swim we’ve got planned. In a training swim, you’re thinking about how it’s all falling together. We’re building up muscle memory for when we do the big swim,” he says.

Penny admits she’s a big fan “of writing [swimming] programs, counting through the laps, pushing myself and working my mind as well as my body.” And having attainable, focused goals—and fun. Judging by some of her favorite swim “feeds,” that also seems to include a disproportionate amount of chocolate. She plans to have plenty available when she comes back to try Kaieiewaho again, likely in September 2011.

“She’s already made a tentative booking with the boat skipper on Kauai and teed-up all the support crew, so she’s gone beyond the idle thought stage,” grins Chris.

Next week, the couple will fly to Florida where Penny’s tenacity will bring her another victory: She’ll be inducted into the International Marathon Swimmers Hall of Fame. If there were one for adoring, alluring, fit, and compatible couples who just happen to be grandparents, they’d probably be showcased there, too.

The entire interview with Chris and Penny Palfrey is on the Town Square archive at hawaiipublicradio.org.