State Senator Josh Green is calling for Hawaii tax payers to bail-out the financially failing University of Hawaii Cancer Center (UHCC). His request comes after a report was released confirming that the UHCC is a failing institution. It would be easier to stomach if it wasn’t coming from one of the supporters of the UHCC’s previous director, Michele Carbone, who is the chief cause of the important research center’s current dire financial straights.

“We have to solve the debt problem because if we don’t see a sustainable program, they’re not going to be able to get the top researchers and the top studies going. And that’s the only way to get those extra grants to pay for all of this,” Green said yesterday.

But the new report, produced by the UHCC Review Task Force, confirms what our own investigation turned up last summer; that the UHCC was being grossly mismanaged by a corrupt unit director who squandered billions of dollars over the course of his tenure.

One of the “accomplishments” often ascribed to Carbone by legislative friends Sen. Green and State Senator Roz Baker is that he was the one who successfully moved UHCC from its humble downtown beginnings to its current world-class facility on prime Kakaako waterfront land.

Yet, as the report points out, “Shortly after its expansion, UHCC began draining its financial reserves at an alarming rate as mortgage payments and operational costs began to outweigh its current funding and revenue streams—primarily funds from the state’s cigarette tax and return of overhead from external funding.”

Last summer, the Independent also reported that, since becoming director in 2008, UHCC faculty had filed at least 25 grievances against Carbone for various violations of academic codes of conduct and of their academic rights—more grievances than any other UH unit ever. Multiple sources within the UHCC told the Independent last summer that Carbone was an incompetent, ego-maniacal and petty administrator—opinions that are confirmed upon reading through the list of grievances against him. (The faculty union has sided with the plaintiffs in each case that has thus far been resolved.)

According to the report, “to move UHCC forward, there must be improved leadership and a return to faculty governance. The UHCC, formerly known as the Cancer Research Center of Hawai‘i, received its NCI designation in 1996 and ran well for decades on a modest budget with strong faculty who maintained grant funding. To reestablish UHCC as a crown jewel of UH Manoa and the state of Hawaii, it will require excellent, transparent, and equitable management that follows the laws and policies that govern it.”

One of our sources within UHCC, Dr. Loic Le Marchand, told us that, under Carbone’s leadership, UHCC lost some of its best researchers over these grievances, and that Carbone failed time and again to replace them with competent principal investigators, threatening the renewal of center’s National Cancer Institute designation and accompanying federal P30 grant.

Yesterday’s report confirms the loss of these top researchers, saying, “The fiscal solvency of UHCC was also severely impacted by the loss of senior faculty over the past four years along with their extramural funding. Recovering from these losses is a major obstacle to the future success of the Center.”

The report’s primary conclusion is that, “After considerable comparisons with other consortium-type operating cancer centers across the country, the UHCC Review Task Force identified that the adopted business model for UHCC is flawed and incomplete, thus nullifying the center’s ability to achieve its much anticipated benefits. The reliance on Consortium partners for clinical trials is ineffective, and employing research and specialist-type faculty (PhDs) rather than qualified research/clinical practitioners further complicates the problem.”

The sad story of the fall of UHCC under Carbone’s tenure is a perfect model for us to examine the larger, systemic problem that caused it. This problem, which has plagued the university for decades, is a problem of powerful outside entities exercising various degrees of control over the university. These entities—sometimes state agencies, sometimes legislators like Green and Baker, sometimes private business interests—have so much influence over university business that they are able to force decisions which benefit these entities at the expense of the health and strength of the university. 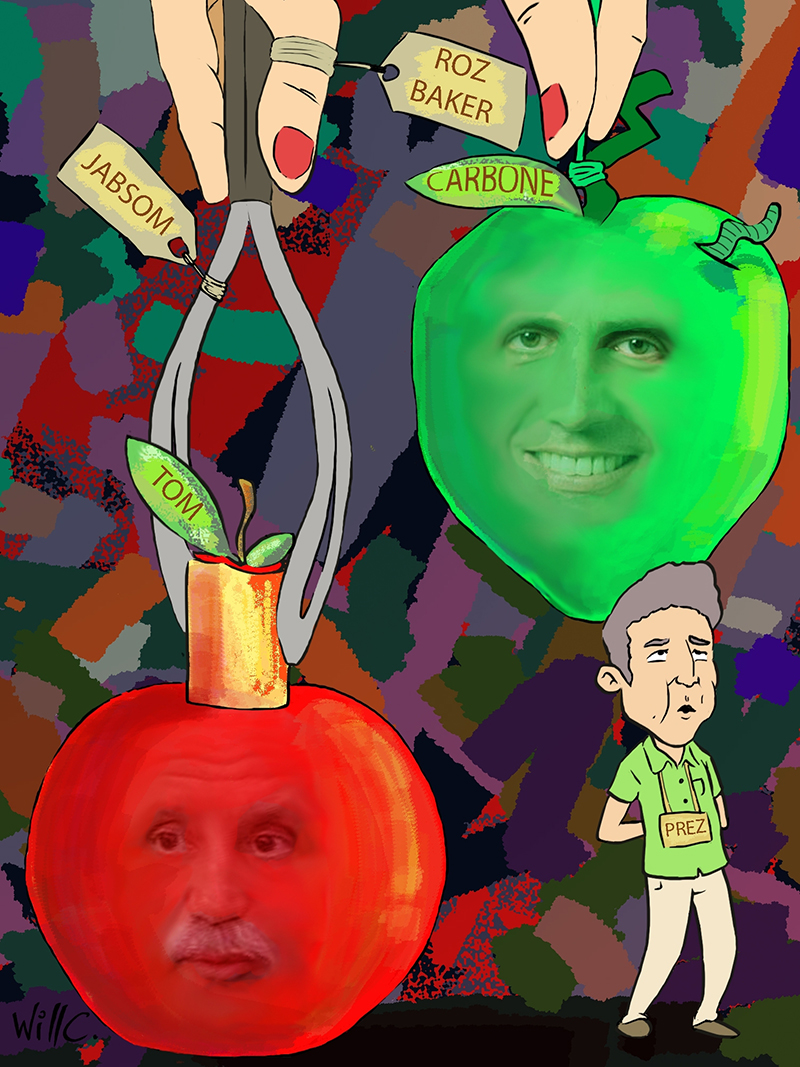 These players managed to strong arm Chancellor Apple into releasing $9–10 million in order to hire 16–25 new UHCC faculty over the next two years at salaries that would average in at close to $400,000. The reasoning was that without new hires to diversify its research, UHCC could lose its federal National Cancer Institute (NCI) designation and P30 grant funding from the Office of Cancer Centers.

But, as Le Marchand said last summer, “With a record already in place showing that [Carbone] has been unable to recruit good researchers—and with clear indication that he won’t be able to do any better in the coming three years—the decision that should have been made would be to fire Carbone six months ago or over the summer, and to look for a new Director with experience.”

Le Marchand went on to say that, “[Without Carbone, UHCC] would have had an additional two or three years to rebuild the center and be competitive before having to worry about renewing our designation,” explained Le Marchand. “But now it is absolutely certain that [the NIC] is not going to be renewed at this point; that is a pipe-dream.”

The $9–10 million extorted expense forced Apple to institute an unpopular hiring freeze on the rest of the Manoa campus and has precipitated an overall budget crisis that has trickled down and hit students hard.  According to Le Marchand, Apple had been trying to remove Carbone and reform UHCC since he was first appointed chancellor. Apple was also trying to reorganize Manoa units to be more equitable, which meant taking funding from JABSOM and Dean Hedges.

The freeze made Apple vulnerable to criticism from deans like Hedges and directors like Carbone, who leveraged their powerful friends in the BOR to pressure UH System President David Lassner—whom many believe was appointed because of his willingness to go along with such requests—to fire Apple. Their meddling cost UH Manoa an important leader who was widely respected by faculty and students, sowed discord between different units and worsened the current financial situation at Manoa

Now we have a bill moving through the State House (HB555) that proposes to fix the Manoa budget crisis by abolishing some small programs (any undergraduate degree-granting program that graduates fewer than ten graduates per year be abolished). If this decision went through, it would eliminate approximately 24 percent of Manoa Bachelorʻs programs, including programs such as Classics, French, German and Russian.

So what have we learned from all of this? Certainly that leaving such an important unit to the university in the hands of an incompetent scoundrel (the kind of person who wastes an insane $700,000 of tax payer dollars to build a kitchen in order to host a television show about healthy eating, which he subsequently canceled anyway) like Michele Carbone was a terrible idea. We’ve also learned that letting a small group of powerful meddlers and university outsiders like Ushijima, Holtzman and Baker influence university business will result in disaster.

We’ve seen, through previous Board of Regents actions like the flawed selection process that landed us with President Lassner, and Lassner’s subsequent firing of Tom Apple at the insistence of this cadre of influencers, that the University does not really belong to the people of Hawaii anymore; that its professors and students are no longer valued or consulted over important decisions like who will lead the campus as Chancellor. That needs to change.

As Dr. Joel Fischer wrote in an Independent community voices column: “Even casual observers of UH wonder how it is possible to have a string of such obviously unqualified, incompetent and/or corrupt presidents of the university. The answer is straight-forward: They are appointed by even less qualified, incompetent and/or corrupt members of the Board of Regents. For many, many years, the predominant criterion for selecting most regents has been political connections and/or success in business. But what does either criterion have to do with successfully running a university? The answer is: Nothing!”

Tight political control over the university and regent incompetence combine to stifle progress at the university. Any time a leader like Apple comes along and actually tries to tackle the problems caused by the university’s top-heavy, wasteful and, often, downright nepotistic administration, the administrators and unit directors who have been lining their pockets under the status quo call in powerful friends—just like Dean Hedges and Michele Carbone did—to throw that leader under the bus.

And they make sure they’ve got weak puppets like Lassner installed to execute their will. “How else does one explain the lack of any real choices in the candidates available in the last two presidential searches?” asks Fischer. “And the result of these narrow searches got us an ethically-challenged administrator from California and, in the last search, a long-term UH bureaucrat who met almost none of the search criteria.”

Radical changes in regent selection criteria is long overdue. Legislators should stay out of university business, except as an oversight body to ensure that the regents and their selected administrators are performing efficiently, are honest and are truly working toward the benefit of the university and the community. Students and faculty must be given a legitimate and appropriate share of governance.

“This problem may be the most difficult and challenging change of all,” says Fischer. “To have intelligent, wise, caring, experienced and independent regents requires an enormous change in mind-set from almost everyone involved in the selection process. But if that can be accomplished, everything else will fall into place.”

So yes, Senator Green, if it means saving the UHCC, I wouldn’t mind paying my share of the bailout you propose—except that there’s no guarantee, in my mind, that the Cancer Center fiasco isn’t just one in a string of other disasters caused by the kind of outside influence exerted by legislators and private business interests.