NORTH SHORE—Traffic on the North Shore was stopped on Friday for approximately half an hour as wind energy company Kahuku Wind hauled a large part of a turbine to their property in Kahuku, where the first wind farm Oahu has seen in over 20 years is being constructed.

North Shore residents say the road from Haleiwa to Sunset Beach is already congested with local traffic, tourists, and road work going on near Shark’s Cove. They say that Kahuku Wind should be hauling the turbines at times in the day when traffic has lessened.

With traffic at a halt on Friday, drivers didn’t sit for long and many were soon out of their vehicles walking and standing in the middle of Kamehameha Highway, venting. Others were sitting in the back of trucks while the traffic was at a complete stop between Pipeline and Shark’s Cove, and from Waimea Bay to Chun’s Reef.

The traffic-stopping cargo was a component of the 12 2.5-MW wind turbines produced by Clipper Liberty, and was on its way to the 575-acre parcel of land located near Charlie Road—between Kahuku Town and Turtle Bay, mauka of Kamehameha Highway on land owned by Kahuku Wind. Construction began in July, leading Kahuku Wind, a subsidiary of Massachusetts-based First Wind, to haul the wind turbines past Haleiwa to Kahuku, slowing and stopping traffic on the already congested North Shore roads.

“There were so many people out of their cars,” said commuter Carolyn Reich, who couldn’t get onto Kamehameha Highway from Ke Iki Road for approximately 20 minutes. “I saw some people sitting in the back of their trucks, just hanging out. It made me late for work in Haleiwa. It was so extreme that we need to know if this is going to keep happening and why they’re not doing it a lot earlier or later in the day.”

On Thursday, drivers reported following a police escorted truck with “an enormous windmill part” from Haleiwa towards Kahuku. According to one source, the truck stopped frequently for minutes at a time along Kamehameha Highway as it made its way North.

“I got stuck behind it on Thursday morning on my way home from Haleiwa, took me a half hour instead of 10 minutes, then again by the skate park for such a long time as the thing came from Haleiwa. It seriously ruined my day two days in a row. I’d like to know why they’re not doing this after hours,” said Aaron Rogers of Rocky Point.

“Friday was the really bad time though. Traffic was just completely stopped, not moving at all for so long,” Rogers added.

Drivers who have followed Kahuku Wind’s cargo say they hope to find out if the clean energy company can haul the turbines at a different time of day, and how long it will be going on for. However, calls made by The Hawaii Independent to a First Wind representative and the main office on Friday, Saturday, Monday, and Tuesday were not returned.

According to Kahuku Wind, construction on the farm is expected to be completed by early 2011 and will create employment opportunities during design, engineering and construction, including approximately 200 construction jobs. Once completed, the farm will support the Hawaiian Clean Energy Initiative, which aims to have 70 percent of the state’s energy for electricity and ground transportation come from clean energy by 2030. Upon completion, the Kahuku Wind Project will have the capacity to generate enough renewable energy to power 7,700 Oahu homes.

First Wind has one wind farm currently operating on Maui called Kaheawa Wind that generates 30 megawatts (MW) of energy, providing up to nine percent of the electricity distributed by Maui Electric Company. First Wind is also developing Kaheawa II, which is expected to generate 21 MW of energy. The company altogether produces 478 MW of energy through six operating wind farms throughout Hawaii, Utah, New York, and Maine. 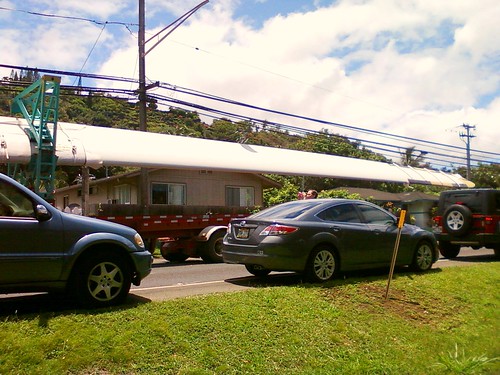