HONOLULU—A coalition of Honolulu residents spoke out against what they say is the wrong route for the City’s Honolulu Rail Transit plans.

Former-Gov. Ben Cayetano led the coalition’s demonstration at Honolulu Hale on Monday, January 31. Cayetano expressed their opposition to the use of heavy elevated rail. Several dozen concerned parties and members of the print and broadcast media attended the conference, which took place on the steps of Honolulu Hale.

Cayetano accosted the Environmental Impact Statement created for the project, its price tag and funding, the planned route, and the “one-sided” manner in which the public relations campaign for the project has been presented to the tax-paying public.

The former governor said that despite the progress made thus far in moving the project forward, it is by no means a “done deal.”

When asked what could be done at this point to stall construction of a heavy rail system on Oahu, Cayetano said that challenging the EIS is a way for rail opponents to move forward.

“Make them start it over,” said Cayetano, who called the previous EIS process illegal.

The City has cited a projected cost for the rail project at $5.5 billion, but Cayetano said that the price is likely to change because construction is bound to unearth Native Hawaiian remains, which will significantly increase costs. He said that the project will actually cost something closer to $7 billion.

Cayetano also said that while the Federal Transportation Authority has offered $1.5 billion for the project, those funds are not likely to be released by the Republican-controlled U.S. House of Representatives, and that the cost overrun will be foisted on the public. 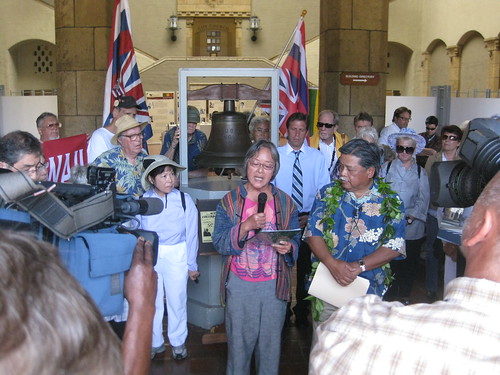 The coalition was created in large part to counter the information presented to the public by the media. The coalition currently consists of individual AIA architects, Advocates For Consumer Rights, Friends of Makakilo, Hawaii’s 1000 Friends, Hoa’aina o Hawai’i’imiloa from Leeward Community College, Donors of Irwin Park (represented by Michelle Matson), The League of Women Voters-Honolulu, Life of the Land, Oahu Farmland Alliance, The Outdoor Circle, Residents Along The Rail, and other individual supporters.

Cayetano said that the media attention on the project has been misleading and gives the impression that rail, in its current proposed form, is coming to Oahu—that all of the proper decisions have been made and necessary permitting procured. Cayetano singled out Mayor Peter Carlisle as being dubious in his willingness to consider other options to heavy rail.

“Transparency went out the window as soon as he took office,” said Cayetano, who supported Carlisle is the mayoral race. “I’m very, very disappointed,” he said.

Cayetano also criticized former-Mayor Mufi Hannemann as well, for disregarding potential cost overruns in fast-tracking the rail project. “That’s the way he ran his despicable campaign and that’s the way he did business.”

What do you think about the Honolulu Rail Transit Project? What would you like the Mayor and City planners to know? Please send a Letter to the Editor to [email protected] or leave a comment below.