WAIKIKI—On the morning of Thursday, July 21, nearly 500 Local 5 members were joined by community, labor, and faith leaders to stage an early morning rally and bed-making skit on the sidewalk fronting the Hyatt Regency Waikiki.

Their actions were part of a nationwide effort across nine cities to call attention to housekeeping workload/safety and job security concerns.

Workers at the Hyatt Regency Waikiki officially launched their boycott of the Hyatt on June 17, 2011 and have been working without a new contract since June 30, 2010.

According to the workers, Hyatt has eliminated jobs, replaced career housekeepers with minimum wage temporary workers, and imposed dangerous workloads on those housekeepers who remain. 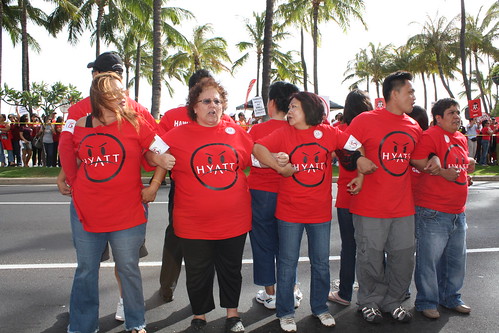