WAIKIKI—Friday, February 18 was a joyful day at the Honolulu Zoo, as it marked the official opening of it’s long-awaited new entrance. The Department of Enterprise Services hosted a gala opening of the new entrance complex at 8:30 a.m. in the morning, attracting a large crowd of politicians, press, past and present zoo staff, students from nearby Jefferson Elementary School, and supportive zoo patrons who were fortunate enough to be invited.  In addition, everyone in the immediate vicinity got free admission for the day.

Putting this zoo milestone into perspective was Paul Breese, the first official Zoo Director who served from 1947 until 1965. The zoo has been around for nearly 100 years, beginning with Ben Hollinger, the youngest member of the Board of Supervisors who acted as an unofficial zoo director when he acquired bears, monkeys lions, birds, and other animals to be showcased in the relatively new Queen Kapiolani Park that was under his control.

In 1916 when Hollinger purchased an African elephant en route from Australia to Canada named Daisy for $4000—a sum of money that at that time could have purchased a fee-simple, beach-front property in Waikiki. Daisy was a major attraction for visitors and residents alike, who were allowed to ride on her back.

In 1933, Daisy trampled and killed her keeper, and was in turn shot by the police. Given that this was the height of the depression, the zoo was suffering from lack of finances; it morphed into the Waikiki Bird Park until just after World War II, when the city accepted a donation of a camel, elephant, chimpanzee,s and deer, sparking a renewed interest in the zoo and setting in motion a series of improvements that carry on to this day.

According the Breese, the first thing he did when he became the first full-time director in 1947 was build a fence. Yes, you read that correctly: In its earliest days, the zoo lacked fences to protect the public from the animals and vice versa.

Next on Breese’s agenda was to build an office, an effort that was also problematic in nature. Eventually, Alfred Preis was appointed architect of the entrance and offices in 1962, shortly after he designed the USS Arizona Memorial in Pearl Harbor with which it shares several design elements. His structure served as visitors’ first impression of the zoo until February 18, 2011.

The now “old” entrance has now been designated as historically significant and, according to Assistant Director Tommy Higashino, will be transformed into a visitor center that presents the zoo’s interesting history to the public once funding is established. 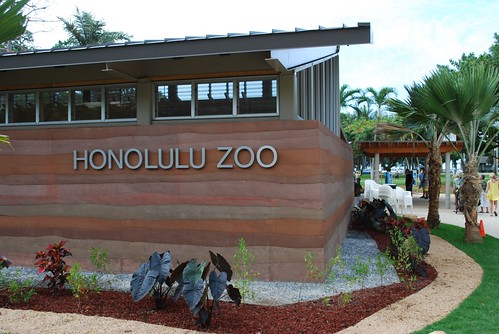 Clearly our zoo has come a long way. In addition to the new entrance, several other improvements and additions have been completed in recent years such as the Hale Imi Iki Learning Center (designed by the same architects, Urban Works, that designed the entrance) and upgraded animal enclosures for orangutans, lions, and tigers, etc. Also in the works is a spacious, state of the art 1.4 acre “Asian Tropical Forest Elephant Exhibit” that is, according to Higashino, slated to open October 4.

Architect for Urban Works, John Ida, explained the delays to the opening of the entrance (originally scheduled for fall 2010) as a series of last minute design changes. This minor delay was nothing in light of the fact that a new entrance had been on the books since 1983 but continuously held up over political disputes.  Delays due to disagreements between the City and State regarding the zoo (or in general) are nothing new, either. Breese specifically referenced lack of consensus on the realignment of Kalakaua Avenue as a factor delaying Preis’s entrance.

The new entrance provides an enhanced, visitor friendly, welcome with improved access and attractive graphics intended to enhance guests’ experience.  There are two ticketing windows plus a special one for members. There is also a concierge building and a vastly improved gift shop. A trellis area in front of the ticket booths protect visitors from the sun while shed roofs provide opportunities for natural ventilation and daylight. The walls are made of earth-toned rammed concrete made to resemble the rammed earth architecture of early civilizations.

Carlisle referred to the zoo as “one of the City’s great treasures” and an “unequivocal world class facility” that currently receives 600,000 people per year. Surely this latest round of improvements will allow it to better serve its patrons and solidify its importance as an educational resource here in Honolulu.

For more information on the Honolulu Zoo, visit their website at honoluluzoo.org.