First Wind, a Massachusetts-based independent North American wind energy company, is planning to construct a clean energy wind farm in Kawailoa on the North Shore. The clean energy farm will be located approximately one mile mauka of Kamehameha Highway, and will have 30 wind turbines that are estimated to have the capacity to service approximately 15,000 homes. The Kawailoa site will be the company’s second on the North Shore following the construction of Kahuku Wind.

“Kahuku Wind is great, but it only scratches the surface of the amount of energy we use on Oahu. [Kahuku Wind] provides two to four percent of the energy on Oahu, and the Kawailoa sight will produce more,”  First Wind representative Wren Wescoatt said on Monday.

In July, First Wind broke ground in Kahuku, building the first wind farm Oahu had seen in approximately 20 years on the company’s 575 acre parcel near Charlie Road, between Kahuku Town and Turtle Bay, mauka of Kamehameha Highway. Kahuku Wind consists of 12 wind turbines and a microwave communication tower that is 30 feet high. The Kahuku site has the capacity to produce enough energy to power the equivalent of 7,700 Oahu homes.

According to Wescoatt, the turbines at the Kawailoa site will be of “slightly smaller capacity than the turbines in Kahuku.” The turbine blades in Kahuku measure up to about 15 feet each. The Kahuku site has a 2.3 MW capacity. First Wind’s turbines are manufactured by Clipper Liberty, a wind energy technology company.

The planned wind farm in Kawailoa will be constructed on property owned by Kamehameha Schools, who will continue to hold title to the land. It will not be sold to First Wind, Wescoatt said. 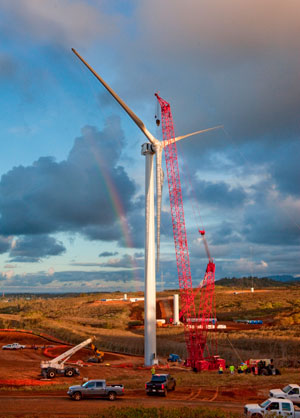 “We were looking for other places to potentially put the farm, but this property is a great place. It’s former sugar cane land,” Wescoatt said.

First Wind is currently focusing on developing wind farms in the northeastern and western regions of the continental United States and Hawaii. In addition to Kahuku Wind, they have one wind farm currently operating on Maui called Kaheawa Wind that generates 30 megawatts (MW) of energy, providing up to nine percent of the electricity distributed by Maui Electric Company, and are developing Kaheawa II, which is expected to generate 21 MW of energy. The company altogether produces 478 MW of energy through six operating wind farms throughout Hawaii, Utah, New York, and Maine.

Unlike fossil fuels, wind energy does not pollute the earth nor cause carbon emissions that contribute to the growing problem of global warming. Under the energy agreement signed between the State of Hawaii and Hawaiian Electric in October 2008 as part of the Hawaii Clean Energy Initiative, Hawaiian Electric committed to increasing renewable energy statewide by 1,100 megawatts by 2030.