Politicians hate to talk about it. The media doesn’t cover it, unless they absolutely have to. It is a taxpayer’s nightmare. Yet it has come so far. It is the Honolulu Rail Transit project, aka TheRail.

Here is a plain English environmental assessment of this all-time largest of public works in Hawaii:

It is to be built on 700 enormous columns with 21 stations, each the size of a football field.

It will create a 20-mile scar across the kona side of our beautiful island.

2. It will go through actively farmed land, destroying some of Oahu’s best agricultural land and making a farce of the “food security” conversation.

3. It will block off the Honolulu waterfront.

4. It will tear up the burial grounds of the Hawaiian ancestors.

The traffic alternatives to its elevated steel-on-steel heavy rail approach were not considered.

Its financial plan of local tax revenue and Federal money is a shamble.

Yet the City government is doing the old one proud. It has organized a groundbreaking ceremony for February 22. It is telling us that all the arguments have been heard, and that TheRail is going full steam ahead.

Let us give former-Mayor Mufi Hannemann credit for transparency of a sort. His Rail was—and is—transparently a package of lard for the developers, the engineers, the P.R. consultants, and the construction companies. It created jobs for his friends and lots of cash for his campaign. It played to the desperation of the Leeward commuter and the unemployed construction worker.

Mufi may have lost the 2010 election, but his signature project miraculously survived with only one hitch, which was the study of finances left behind by the retiring Governor Linda Lingle.

The revival of debate

On January 15, after new Gov. Neil Abercrombie had dismissed Lingle’s financial study as irrelevant to the environment, and after new Mayor Peter Carlisle had dismissed it as biased, the League of Women Voters sponsored a panel on TheRail at Washington Intermediate School. The idea was simply to foster public discussion where there had been none.

Despite being asked early and courteously by the League, the City Transportation Department declined to send any of its numerous public relations staff to participate.

Had they attended, they would have witnessed what surprised everyone: The cafetorium was nearly full. They could have heard dozens of angry taxpayers pour out their frustrations, which were of three related types: One, that the City administration had presented its heavy rail plan as a “done deal,” without allowing for real public discussion. Two, the City administration never seriously considered the transit alternatives. Third, as a result the public has little idea what it’s getting into.

Widespread public antagonism was apparent—not to mass transit in itself but to the City’s rail plan. Nonethless, it took former-Gov. Ben Cayetano nipping at Carlisle’s “full-steam ahead” posturing, to finally get rail back into the news.

The most important message of the renewed activity is that unless everyone believes the City administration’s insistence that it’s over, it isn’t over. The path of real decision-making is not closed.

The most immediate reason is indeed money. The elevated steel-on-steel scheme was not only the ugliest but the most expensive of the available ideas. While contending economists can bicker over tax revenues, two major points emerged at the City Council Transportation Committee on January 12. One is that several hundred million dollars for TheRail is actually Federal bus money.

The second is a cloud over the Federal end of the funding. Not only has Hawaii recently lost $320 million in earmark funds but, as of his announcement on February 1, U.S. Sen. Daniel Inouye lost the battle for maintaining congressional earmarks for the next two years. More recently, on February 5, the U.S. House Republican Study Committee announced its intentions to shut down financing of the so-called New Starts program on which TheRail depends—yet another development not reported by the conventional news media.

What will happen? No one really knows. Let’s say, at least for the next two years, our Congressional delegation is unlikely to bring home the billion-and-a-half dollars required by TheRail.

Using the country-to-city ruse, TheRail is attempting to avoid archaeological study until Phase 4 (Honolulu), when its path is locked and the bones of the kupuna lie straight ahead.

The City also has overlooked a variety of important laws. One law suit already in court (without media reporting) attacks dozens of Hannemann’s (now Carlisle’s) sole-source contracts as violations of the State procurement law, among them the contracts to start building TheRail.

Second, the Native Hawaiian Legal Corporation has sued the City for not studying the archaeological impact of TheRail. Just as the sole-source lawsuit goes to the City’s rush to break ground, the native Hawaiian lawsuit reveals the dark heart of TheRail’s geographic trickery: That is the unprecedented and outlandish idea of starting construction of a rail transit in the countryside and building toward the urban core of Honolulu in phases.

The real reason for this again is transparent: Starting in Ewa will allow for TheRail to be budgeted and constructed along the path of least political resistance before hitting the hard stuff in Honolulu, including not only the urban core but the most dense of the ancient Hawaiian burial grounds in Kakaako. Using the country-to-city ruse, TheRail is attempting to avoid archaeological study until Phase 4 (Honolulu), when its path is locked and the bones of the kupuna lie straight ahead. It is for that reason that Moses Haia, director of the Native Hawaiian Legal Corporation, stated bluntly at the League forum that native Hawaiians are (once more) being set up in the role of nay sayers.

Together these suits and other potential suits might remind the government of the lesson of the Superferry: Follow the law.

As we learn more

With time and debate, hopefully the understandably desperate Leeward commuters will see TheRail for what it is and what it isn’t. Because heavy rail is so expensive, the route was cut from 29 to 20 miles. The result isn’t exactly a bridge to nowhere, but the western end starts in the middle of a pumpkin field. It does not connect to Ewa Beach, Kapolei, or Makakilo, let alone to the Waianae Coast. After ripping through Downtown, it stops at Ala Moana Center, far short of the University of Hawaii at Manoa, which is the epicenter of Oahu’s traffic problem, as most drivers know.

As rail issues are illuminated, hopefully more voters will speak up. The place to start is the City Council, which will have to look at finances one last time before money is spent. We have three returning Councilmembers who are asking hard questions about finances (Ann Kobayashi, Romy Cachola, and Ikaika Anderson). Five new members are addressing the issue for the first time: Breene Harimoto (chair of the Transportation Committee), Stanley Chang, Ernest Martin, Tulsi G. Tamayo, and Tom Berg. Talk to them. Write them. Ask them questions.

What do you want?

Despite Mayor Carlisle’s insistence that nothing has changed, much has changed in 2011. Instead of staging a groundbreaking, the mayor should pause to think. He could start by reminding himself of his central campaign promise—fiscal prudence.

These next two years would best be spent on following the law’s requirement for assessing the transit and environmental alternatives. Ideally we could come to rest on a transit system that most people can reasonably support.

My most fervent hope is that young people will get involved. You will have to live with and pay for the results. TheRail as constituted imposes the most intrusive of U.S. mainland solutions on our fragile island environment. It is far more expensive than need be, yet does not really speak to our traffic problems. I hope you will ask yourselves, what kind of city do you want? What kind of island do you want?

To stay tuned or share your concerns and contact info with the League of Women Voters, write [email protected] (Subject: TheRail) or telephone (808) 531-7448.

Tom Coffman is on the Board of Directors for Hawaii’s Thousand Friends, an organization dedicated to ensuring that growth in Hawaii is reasonable and responsible, that appropriate planning, management, and water & land use decisions are made that protect the environment, human health and cultural and natural resources, and that decisions are made and proposals are implemented in conformity with the law. 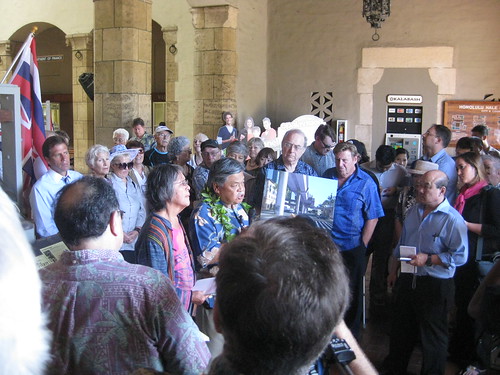