Tom Berg (R) is running against incumbent Rep. Rida Cabanilla Arakawa (D) in this year’s race for the Ewa Gentry, Lower Waipahu, West Loch, Honouluili, and Ewa Villages 42nd State House seat. A Berg supporter received a mailer this week from Ms. Arakawa, which he says may be in violation of both Department of Defense directives regarding regalia display and campaign spending laws.

The mailer, pictured, contains a photo of Ms. Arakawa in her Army uniform ... without the disclaimer that is normally required to accompany such photos. In the mailer, she also says, “I serve to defend your freedom,” and talks about her many awards from the military.

Personally, I have no problem with displaying the uniform in pride of service. If her service is indeed as credible as she claims, she deserves all of the recognition that comes with it.

However, an incumbent seeking reelection should be savvy enough to figure out the rules regarding DOD policy on uniforms—similar to the way Congressman Charles Djou did. If you are going to display the fact that you served, a statement showing that there is no military endorsement is required.

Also, according to the Campaign Spending Commission, Ms. Arakawa is required by law to adhere to the following guidance:

This mailer does not.

The letter, from Ewa Beach resident John Bond, in italics, is as follows:

I received a campaign mail out featuring Ewa Rep. Rida Cabanilla in Army dress blue uniform, with Lt. Col. rank, and using military rank in her campaign email. It is boldly featured on the front cover of the mail out.

“I’I serve to defend your freedom” and “Various meritorious awards from the U.S. Army and U.S. Army Reserves.”

A large number of her legislative population is Pilipino, and this directly implies she is endorsed by the US Army and that to vote for her is what the U.S. Army wants every patriotic Pilipino to do. I have never in over 40 years as a Hawaii voter seen a more blatant misuse of the uniform of the U.S. Army in directly implying a U.S. Army endorsement of a political candidate—especially directed towards a largely unsophisticated political base, and to those in the U.S. military who do not know about DOD rules covering this. Rep. Cabanilla, being a US Army Reserve Lt. Col. should be fully aware of this as a violation, but chose to do so anyway.

2008 DoD rule (section 4.3.2.1 ) makes it illegal for any veteran to “use or allow the use of photographs, drawings, and other similar media formats of themselves in uniform as the primary graphic representation in any campaign media, such as a billboard, brochure, flyer, website, or television commercial.”

It’s a politician’s job in the campaign season to be aware of potential errors like this. Many politicians in races across Hawaii have displayed their military service in pamphlets and on websites ... I’m not against that, I think it is a display of who they are and what they’re doing for the country. However, candidates are required to follow certain guidelines. In this case it seems that some requirements may not have been met for this disclosure. 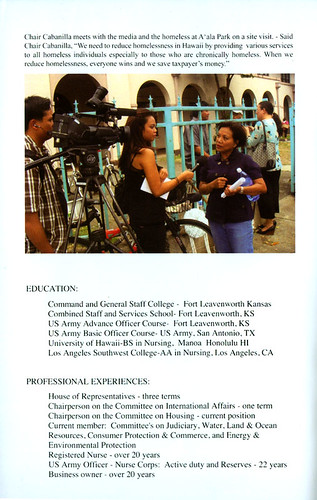 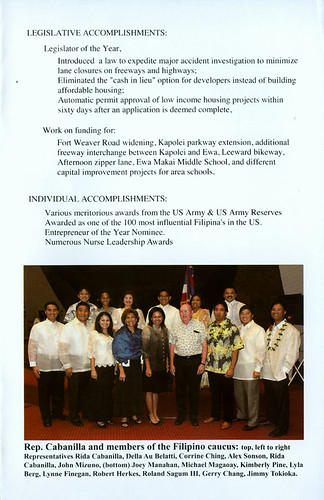 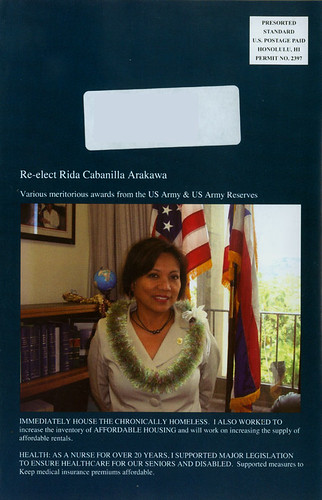