“Some powerful interests who had been dominating the agenda in Washington for a very long time—and they’re not always happy with me—they talk about me like a dog. That’s not in my prepared remarks, but it’s true.”
President Barack Obama, during a speech at Wisconsin’s Laborfest on Monday

Isn’t it interesting hearing someone talk about powerful interests in Washington at a Laborfest? I understand that the hypocrisy is common among politicians trying to act like outsiders, but I think the anti-establishment card has been played out by President Barack Obama and the Democrats.

Obama’s been in office, with a Democratic filibuster-proof majority, for two years now. He was a senator four years before that and was an Illinois state senator seven before that. He also worked toward electing disgraced Governor Rod Blagojevich and was quoted by the Associated Press as saying, “We’ve got a governor in Rod Blagojevich who has delivered consistently on behalf of the people of Illinois.”

For those that believe the myth of Obama the underdog and political outsider, I’ve got a few acres and a million dollar home on North Shore to sell you.

But, rather than take up your time telling the entire Obama story, I’ll retreat to current affairs.

His $50 billion dollar stimulus plan seems like another attempt to put money into union hands, rather than an actual attempt at economic stimulation. Weren’t we all told that infrastructure was going to be taken care of by the original stimulus bill? In fact, according to WhiteHouse.gov, the first stimulus provided $150 billion to infrastructure investment ... aimed at increasing long term job security and economic growth. Apparently it wasn’t too successful.

So the question everyone should ask is, what establishment is he talking about? The current “establishment” has been spending money left and right under the auspices of extended economic growth, when any growth we may have had was really a temporary fix. Obama says he is and has been constantly working on the economy.

I ask, where was that tenacity when the president was arguing for a healthcare bill projected to raise costs for businesses and activity producing agencies? How does fixing the nation include running up a vast deficit to provide transfer payments for your constituents? When has spend, spend, spend as a legitimate long term solution ever worked? It had little effect on long term economic expansion under the New Deal until Americans were provided jobs working for the military machines of World War II.

For those that don’t believe Obama’s continual spending doesn’t go to his voting base and actually contributes to the economic base, I’ll provide two pictures. One is of stimulus spending, shaded by actual expenditures with the darkest states being the highest amount of expenditure. The other is of the electoral voting in the 2008 election, in which Obama won his presidency. 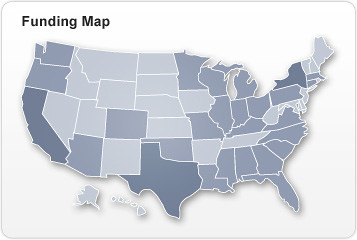 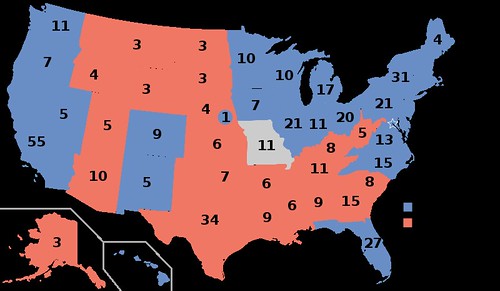 Follow this link to see a by-state graph showing state recipients of the original stimulus bill.

There are two establishments in Washington: Republicans and Democrats. Obama is just serving his. Make no mistake about Obama being an inside candidate. He’s not been handed everything on a silver platter on his way up, but he’s no working man either.