HONOLULU—Hawaii’s equal rights supporters will be gathering at the State Capitol this Friday afternoon to thank 19 Senators for voting in support of civil unions.

The purpose of SB232 SD1 is to extend the same rights, benefits, protections, and responsibilities of spouses in a marriage to partners in a civil union by recognizing the status of civil unions in Hawaii, without revising the definition or eligibility requirements of marriage under chapter 572, Hawaii Revised Statutes.

For the text, to see the hearing schedule, and to read testimony on Senate Bill 232, click here

When former-Gov. Linda Lingle vetoed a similar bill, House Bill 444, at the end of last year’s legislative session, the governor called civil unions the most critical issue for Hawaii residents in 2010.

“The tone going into this session is that there is a lot more hope that the [civil unions] bill will pass,” said Rachel Orange, president of Citizens for Equal Rights, a group in support of civil unions and equal rights. “Overall, we’re just very happy that there’s a vehicle for civil unions this session.”

Orange pointed to the results of the last election, which saw so no backlash against lawmakers who supported civil unions in 2010. Orange said Hawaii’s voters are overwhelmingly in support of equal rights.

In 2011, lawmakers are looking to bring the civil unions issue to a vote early and quickly. In stark contrast to a heated 18-hour committee hearing on civil unions last year, Sen. Clayton Hee, chair of the Committee on Judiciary and Labor, managed to keep testimony and voting for his committee hearing within a 4-hour period.

At the Tuesday hearing, testifiers asked why the committee members were not proposing questions—if the lawmakers had already made up their minds. The senators responded at the end of the hearing by saying that they have heard most of the same testimony and arguments from both sides of the civil union debate and were only interested in hearing new perspectives.

Sen. Gabbard, a member of the Senate Committee on Judiciary and Labor, acknowledged that the 2011 version of the civil unions bill will likely pass. Gabbard has long been a staunch opponent to gay marriage and civil unions, a campaign he led prior to leaving the Republican Party to join Democrats in 2008.

“This issue is not about bigotry or homophobia,” Gabbard said on Tuesday. “Passing a civil unions bill will not end the debate.”

Sen. Slom also said that the civil unions debate will not end, whether or not SB 232 passes into law. The Republican senator said if he had things his way, the State would not be involved in the marriage process whatsoever. “But it is,” Slom said at Tuesday’s hearing.

Slom said he’d like to address the concerns civil union supporters have about gaining access to benefits and services, but does not think it should be done via civil unions.

Orange said same sex marriage, something she supports, would have to come from Capitol Hill and not the State because most of the benefits in marriage are handled at the federal level.

“Lawmakers and testifiers should address the matter at hand, and that’s civil unions, not same sex marriage,” Orange said of SB232. 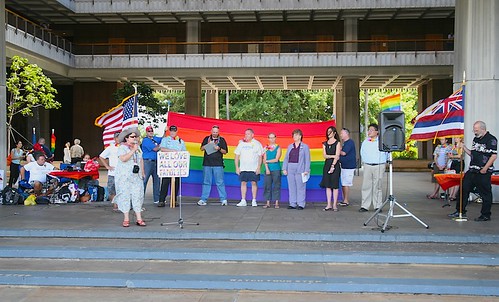 Dread and hope, pride and praise in the aftermath of HB444