I was originally one to complain about Republican gubernatorial candidate Duke Aiona’s lack of face time under the Lingle administration. I hoped that he was campaigning enough to provide a credible challenge to either Neil Abercrombie or Mufi Hannemann and was worried that Democrats might successfully mark him as inexperienced. Unfortunately for them, either the economy or the ideology of the Republican Party is wearing on the Hawaii people in this election. Aiona and running mate Lynn Finnegan are polling very near the Democratic ticket of Neil Abercrombie and Brian Schatz. This will be a tight election. It is very important and can mark a turning point in Hawaii’s governance structure, not just for this year but in elections to come.

I’ve said before that in these elections, Republicans have been given a chance to knock out some huge Democratic figures—leaving them to scramble at the time they should be taking their place as leaders in the State. That’s still the case, and it’s even scarier for them now in the moments leading up to the election.

Abercrombie represents one of this election’s largest figures, a man who has been in power for years, representing Hawaii’s 1st Congressional District from 1991 until his resignation to run for governor in 2010. An Abercrombie victory would further enhance the current power of the Democrats, who now already own veto-override privileges, and would be able to enact any legislation they please.

So let’s take a closer look at the two candidates for governor. I’d like to first sift through the mud-slinging and worst case scenarios for each candidate, then I’ll move forward to what I believe the more legitimate issues are. Hopefully this will give you the opportunity to take each candidate at face value and focus on actual policy suggestions.

Many Democrats attack Aiona for his lack of experience. If that truly mattered to the Democratic Party, they wouldn’t have elected a president with arguably less experience than the Republican candidate for governor. Much of Abercrombie’s plan and emphasis on the campaign trail involves cooperation with President Barack Obama. Did Abercrombie, or any other Hawaii Democrats, care about his experience when they voted the president in?

Democrats also criticize Aiona for not being active enough as a lieutenant governor under the Lingle administration. Aren’t these the same Democrats that criticized a similarly positioned Dick Cheney for too much activity under the Bush Administration? Those two arguments are simply political fodder, meant to stimulate the Democrat voting base and possibly pull some independents who may be willing to vote on a seasoned political veteran.

A big concern among the most hardcore liberals and independents (who are scared of any reference to religion) is Aiona’s stance on social issues. He is planted firmly against House Bill 444, something Neil Abercrombie is attempting to make a referendum issue on the ballot. I’ve talked before about the Democratic reluctance to pass House Bill 444—they didn’t pass it in the open and waited to the end of the session to try it. It wasn’t high on their priority lists and most Democrats (including the bill’s co-introducer Ryan Yamane, who recently talked about how he pulled his support after hearing from his constituency) knew that a large portion of the electorate was against it. There was a vote before and the opposition won.

I don’t believe House Bill 444 should be a major issue in this election (even though I supported it) because I think we’ve got bigger fish to fry. I’ll say again, with under-employment around 15 percent and the economy the way it is, I think we should focus more on economic plans for success. The economic plans of the next administration and the Legislature are really the referendum on the ballot, and they should be.

Hawaii cannot continue to be a state dominated by government, tourism, and military. We need more to create more. If we want a sustainable Hawaii that can help itself, we cannot expect that federal funds will bail us out every time we come across a fiscal pickle.

When it comes down to being economically sound over socially sound, I’ll choose economics any day. A raise in the GET or property taxes are difficult to execute and take longer to change. Social issues change more quickly and generally move with the electorate because they are easier to understand. Unfortunately, bad economic policy is hard to change. Once tax increases are there, politicians get used to them and claim them as necessary.

Aiona’s asking that the law be left as is and wants to switch the focus to the economy.

For Republicans, much of their criticisms of Abercrombie also involve mud-slinging and exaggerations. Many Republicans paint Abercrombie as a career politician who has too much experience in Washington and an overwhelming penchant to vote according to party line. I think the first issue is null. I personally don’t think a successful career as a legislator is a reason to fire someone. The second issue is null by default—both sides can argue the same argument about each other. I don’t think either candidate is known for straddling the fence.

Another issue for Republicans (a scarier one) is the accusation that Abercrombie is a closet Communist and may have participated in Communist activity before he joined the political world. He is proud of his friendship (it’s on his website) with Barack Obama senior, an economist many Republicans view as a communist—or at the very least, socialist. These allegations are serious to many people. They believe Abercrombie will do his best to communize or socialize Hawaii.

I’ll take that argument off of the table. I’ll assume Abercrombie is just a good America-loving Democrat who has a different vision for the state. For me, it’s his written plan that I find excruciating. For all of the talk of Aiona’s religious fervor, he is not proposing an addition to current legislation regarding religious issues. Aiona’s asking that the law be left as is and wants to switch the focus to the economy.

So, I went through Abercrombie’s plan for a new Hawaii and was perturbed by a few issues.

1) He suggests creating one new department out of scratch and creating another to consolidate and centralize many fragmented and ineffective programs. How does he plan on paying for this? The overwhelming theme in his small book is that the economy will get better and we will receive more revenue. There’s not a plan to increase revenues (although I think you get the underlying assumption here), just a plan to increase government on a hope that the economy will get better.

2) Here are some expansionary gems from the report: “Expand Community Health Centers,” “Access Federal Dollars.” In his first bullet on economic policy he states the need to “Utilize federal stimulus dollars right away” to help with healthcare. Abercrombie wants to “develop a Hawaii center of excellence on aging” and “Reinvigorate the State Office of Aging” for Hawaii’s seniors. He wants to “Create a Governor’s Technology Council” and “Appoint a Chief Information Officer of the State” to ensure energy effort successes. Abercrombie also suggests “creating a Hawaii Energy Authority.” These gems about government growth are only up to the eighth page—it’s a 43-page pamphlet.

3) In his entire report, he speaks of utilizing federal dollars and suggests growing government or adding advisors numerous times. Where does he expect to get these funds? Abercrombie’s entire platform is based on pulling money from nowhere to reinvigorate areas in which there has already been much investment. He speaks many times about streamlining many failed programs and creating accountability, and claims the Lingle Administration is the reason they weren’t done so in the first place. Apparently he will be able to negotiate with the union leaders more efficiently, or more likely, he will give them the money they want and claim success based on their statements.

Aiona may not be as socially independent as Abercrombie is. However, my argument is that we do not have the luxury to address social issues (ones that have already been voted on). Democrats could have overridden Lingle’s veto of House Bill 444—they didn’t. The world is a competitive place and Hawaii will struggle if we cannot become competitive. Hawaii’s top bracket is taxed at 49.6 percent. With the expiration of the Bush tax cuts, it’s indicative of the kinds of barriers Hawaii’s money producing class faces. Only New York faces higher taxes. Why go to Hawaii for business if you can go to any other state in the nation, see less resistance, and take home more money?

Hawaii voters have to realize what a vote for Abercrombie truly means for our economy.

The Hawaii Independent would like to hear and publish your views on Hawaii’s governor’s race, and other political races, going into November’s General Election. Email your opinions to [email protected] 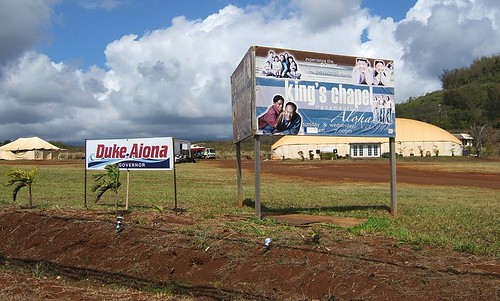 Read the column “Comment: On Duke Aiona, the far right, and the First Congressional District” by Gary Hooser here.