Beth-Ann Kozlovich
February 12, 2010 12:13 PM
A weapons system fired by Israeli forces explodes above the northern Gaza Strip, Jan. 11, 2009. A three-week offensive Israel launched in Gaza at the end of 2008 resulted in 1,400 Palestinian and 13 Israeli deaths. Israel launched the offensive with the declared aim of stopping Palestinian rocket fire on southern Israel. Photo by Jerry Lampen—Reuters

HONOLULU—In the two years since the publication of Dissent: Voices of Conscience, Ann Wright has continued her indictment of U.S. foreign policy. The book, co-authored with Susan Dixon, is a collection of personal stories from “government insiders” including diplomats, active-duty military, U.S. attorneys and intelligence agents who spoke out against the war in Iraq. These days, Wright has also added to her anti-war efforts criticism of Egyptian and Israeli aggression in the Gaza Strip.

A retired Army Colonel and former career diplomat, Wright cabled her resignation to Secretary of State Colin Powell from her state department post on the eve of the invasion of Iraq. Next month marks the seventh anniversary of both. Since then, she has protested at Camp Casey, picketed at Guantanamo, gone on hunger strikes and advanced the case of Hawaii’s Ehren Watada, the Army lieutenant who refused to deploy to Iraq with his unit in 2006.

Though based in Honolulu, Wright spends most of her time traveling, speaking about U.S. foreign policy and why many in the Bush administration should be tried for war crimes. She also says President Obama is too closely mirroring Bush administration policies and hopes he will earn what she says was a premature Nobel peace prize. Over the past five years, she has reported on her travels on Hawaii Public Radio’s Town Square and this week continued the on-going conversation.

In 2009, Wright made three trips to Gaza and Egypt punctuated by a trip last September to Afghanistan. Why Gaza? After all her attention cast on Iraq and Afghanistan, Wright says she was “stunned as a military officer by the ferocity of the attack, the types of weapons used on a captive civilization population.” The attack she cites is the December 2008 Israeli retaliation for Hamas rockets fired into Israel. The attack ended after 22 days, just prior to the inauguration of President Obama.

Gaza is a tiny place with a huge population: the stretch of 25 miles is only 5 miles wide yet home to 1.5 million people. According to Wright, many call Gaza an open air prison “because of the siege, the quarantine that the Israelis, the Egyptians, and the international community have on Gaza as a pressure point” to cause the people of Gaza to throw out Hamas, despite the party’s democratic election in 2006. Egypt has erected underground walls to seal off tunnels used for smuggling contraband, including materials to rebuild Gaza. Sanctions don’t work, she says: “It’s the people that always get squeezed.”

January 6 - 12, 2010 was the deadliest week for those living in Gaza since the January, 2009 cease fire. In that first week of 2010, Israeli air strikes killed 7 Palestinians, including 3 civilians as reported by the U.N. Office for the Coordination of Humanitarian Affairs in occupied Palestinian territory.

Ironically, this was what Wright and others had hoped to avoid by organizing the Gaza Freedom March to mark the one year anniversary of the cease fire. Joined by almost 1,400 representatives from 44 countries and later, another 500 aid workers from the group, Viva Palestina led by British MP George Galloway, the show of support was thwarted by the Egyptian government. Four days before the protesters were due to arrive in Egypt, Wright was told no one would be allowed to transit the country into Gaza. Border security conditions were the reason, according to the Egyptian foreign ministry. Even Wright, who had been in Egypt for over a month, was prohibited from going into Gaza despite the three other occasions she had been granted access.

With their request to enter Gaza denied, Wright and the protesters were told to consider themselves tourists. “We told them these people did not come to Egypt to see the Pyramids, they came to do some specific humanitarian and political work,” she says.

Wright says she also told them that she would not and could not control the protesters who would likely do within Egypt what they had hoped to accomplish in Gaza if not allowed to complete their journey. After days of negotiations, only 100 of the protesters were given permission to enter Gaza; 92 actually decided to go, she says. 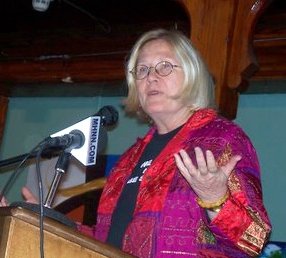 Retired U.S. Army Colonel and peace activist Ann Wright submitted her resignation letter to then U.S. Secretary of State Colin Powell on March 19, 2003, the day before the onset of the U.S. invasion of Iraq. Photo from VoicesofConcience.com

Wright continues to call on the people of the world to pressure their respective governments, though she agrees Americans are overwhelmed and may not be paying as much attention to Gaza as she would like. Domestic issues, the global economy, and wars in Afghanistan and Iraq dominate the national consciousness and media. About Iraq, she advises Americans to scrutinize how President Obama is choosing to implement the too-slow Bush administration plan to draw down troops in Iraq with little strategy for the country’s ongoing sustainability—and no one should be surprised that President Obama is escalating troops in Afghanistan.

“He ran on a platform of increasing the war in Afghanistan,” she reminds. While she believes relatively few supporters seemed to pay attention to this part of his campaign, Wright also says the real window of opportunity to help the Afghani people expired in the first months of 2002.

Clear to her, too, is the current difference between supporting U.S. foreign policy and supporting U.S. troops. She says decisions that affect the military are separate from those who are ordered to carry them out.

In Honolulu until the end of this month, Wright will lead a workshop on Gaza and nonviolent techniques to affect change at the February 26 and 27 Friends of Sabeel regional conference at St. Andrews Cathedral. Afterward, she will return to the continental United States. As soon as Washington unfreezes, Wright says she will be back in her orange jumpsuit protesting for peace.

The entire interview with Ann Wright and Beth-Ann Kozlovich can be heard on the Hawaii Public Radio archive at www.hawaiipublicradio.org.