There is an old expression: “Nothing endureth like change.”

Most of us may nod in agreement with what it means and still chafe just under the surface at its effects. Often, psychologists tell us to embrace change, make friends with it, and thus defang it. That strategy may work well with interpersonal fears, but when applied to the changes that have made an enduring impact on Hawaii’s fragile ecosystem, that line of thinking is both hollow and ridiculous for those who would like to protect what’s left of Hawaii’s native species. And that’s where they get into trouble with those who believe that whatever plant and animal species are now here should also be protected.

The humans who made their way to Hawaii are responsible for importing whatever seemed good at the time—including and especially, themselves. Polynesians had their canoe plants and animals; post-contact European ships brought more of their own varieties, game animals, and some quite unintended critters, including rats and cockroaches whose descendants still call Chinatown and plenty of other statewide places their playgrounds. But you can’t fault humans who migrated here for their pragmatism.

“It really started out as what are the useful things that we as humans need to provide our food, resources, materials for building, the things that are important to us,” according to Paul Conry, the administrator of the Hawaii Division of Forestry and Wildlife in the Department of Land and Natural Resources. His position also makes him the State Forester and director of the State’s wildlife program.

Accounting for the early importation of non-native plants and animals, Christy Martin, the Public Information Officer for the Coordinating Group on Alien Pest Species (CGAPS), says there was also a recognition that allowing anyone to bring in anything was far from a best practice.

“Even though some of the ungulates started to come in the mid 1800s, when you look at prevention of invasive species, that also started at the same time,” Martin says. “Our first quarantine law was set up by King Kamehameha.”

In that instance, imported coffee plants were subject to quarantine to safeguard Hawaii’s coffee industry. The duality of welcoming some species and acknowleding the damage others could do has only grown over the last century.

“As we added more laws, it was an expansion of consciousness,” Martin explains. “We have over 20,000 native species, some found only in Hawaii. And over time, there has been a feeling of responsibility to those species to stop causing them the harm we’ve caused them. Deer and pigs wouldn’t have gotten here without our help. And these native species are not prepared to deal with species like this.”

Specifically, she means native plant and animal life destroyed by predation, grazing, or the movement of hooves. Without naturally developed defenses, native species are wide open to the effects of invasives, regardless of how endearing, useful, or beautiful those brought-here species might be.

“For people who were born in Hawaii and people who have settled in their lifetime, the thing that they love about Hawaii is that it’s unique,” says Rachel Neville, the operations manager for the Oahu Invasive Species Committee, a partnership of State, municipal, and federal agencies.

“The culture is unique, the langue is unique, and the same is true of it’s natural history,” Neville says. “If the species that fill the ecosystem is what gives you your sense of place and what reminds people of home and makes this place so special, then for people to say let’s embrace everything, well then, we’re really going to lose what makes Hawaii, Hawaii.”

Neville’s group started in the late 1990s when volunteers gave up their free time to control miconia in the Koolau mountains. Since then, They’ve branched out to reclaiming native habitat from other mostly plant invasives.

A look around densely populated areas throughout Hawaii—and perhaps your own backyard—may reflect a very different version of beauty and usefulness.

“If you’re in Downtown Honolulu, and you go outside, everything you see is something that was brought here from elsewhere,” says Conry. “Rarely will you see native plants and animals that are in our urban-built development.”

The point is simple: Most of the plants and animals that we now regard as part of the landscape were just someone else’s ideas of what should be here. But over time there has been a change in how some people have come to appreciate native species. And that has mitigated the temptation to bring to Hawaii from elsewhere “anything beautiful,” adds Conry. “There has been a resurgence and an awakening that we have such beautiful native flora and fauna here and that’s what we should focus on. And you certainly see that the regulatory changes that have occurred over time.”

Trae Menard, the Nature Conservancy’s Director of Forest Conservation, says protecting resources on which we all rely is a non-negotiable. That thinking has translated into the construction of fence projects around the State, the latest of which is on Kauai.

“One of the biggest threats to the functioning of our watershed forests are feral ungulates, goats, sheep, deer, and pigs ... their rooting, digging and browsing,” Menard says. “The main impact they cause is reducing the ability of our forests to capture and provide water for our streams, agriculture, and to recharge our aquifers.”

Initially he says some hunters were against the project; others who spend a considerable time in the forest and have seen firsthand the damage done by pigs understood the logic behind it.

“Once they realized our aim wasn’t to eliminate hunting from the island and wasn’t to fence off the entire mountain—it was really to fence off the most critical high priority areas and control the pigs from within those areas—they came around and understood they were a very important partner in the project,” Menard says.

The real rub for most of us is when the academic argument about protection of native species turns into a reality. Many animal-and-plant-lovers who believe that if it’s here now, species of all stripes and spots should be embraced, vehemently object to the idea of killing anything not native. Although it may be easier for some people to contemplate eradicating a brown tree snake population or getting rid of coqui frogs than culling white spotted deer, the hierarchy of what’s okay to kill seems to prove some animals are more equal than others.

Are, then, the real questions, these: Should every plant and animal be allowed on all islands, or should some islands be off limits to certain animals?

And a corollary: In the competing interests of farmers, ranchers, and plant growers—and even families trying to raise their own food and pay more than lipservice to personal sustainability—how will there be a balance without at least some killing?

The high probability is that finding that balance between assimilating some desirable nonnative animals and safeguarding native species will not be borne of one extremist solution, be it rounding up every last deer, pig, sheep, or goat to relocate Elsewhere or declaring open season on every four-footed invasive.  This may be a case for good fences and good hunters to mix.

On the least bloody side of that portfolio strategy is taking inventory of what animals are where, deciding what to fence in, at what cost, and who will fund continued projects to erect the fences and maintain them. It’s not going to be cheap, but then safeguarding what’s important rarely is.

If we say and mean that we love what gives Hawaii its soul, if we steadfastly believe each island has a distinct personality, then perhaps we should also consider that this should extend to the protection of each island’s unique ecosystem and not seek to replicate all species, native and imported, on every island.

The entire conversation with Paul Conry, Christy Martin, Rachel Neville and Trae Menard is on the Town Square archive at www.hawaiipublicradio.org. Beth-Ann Kozlovich is co-host of The Conversation, HPR’s morning show, which airs 8:00 a.m. to 9:00 a.m. 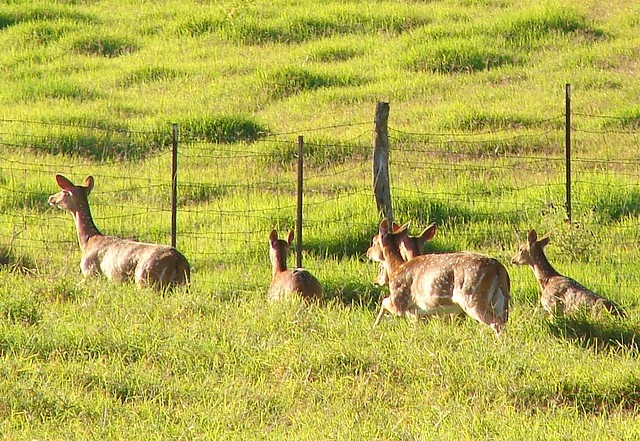