An earlier version of this story was originally posted on September 13, 2010.

AIEA—Sumida Farm in Aiea is a rare treasure of a family farm, nestled in between the Kamehameha Highway and the Pearlridge Mall. It defies logic, in a way, having beaten the odds and survived the aggressive suburban building frenzy that occurred during the late 1950s and 1960s.  Although Aiea used to be home to numerous farms, particularly sugarcane (C & H had a refinery there until 1996), it is now the only farm remaining—a true holdout from Hawaii’s past.

Sumida Farm has been around since 1928. The third and current generation of owners, David Sumida and his sister, Barbara, show a lot of family pride when talking about their farm and their forbearers’ determination to keep their land. Their father was the first president of the Hawaii Farm Bureau and used his clout within local politics to keep his lease when the Pearlridge Mall developer had other plans for it.

The fact that Sumida manages to produce five tons of watercress per week on a relatively small plot of land—and stay family-run and profitable—makes it an interesting case study for agriculture in Hawaii.

Comprising only 10 acres of leasehold on Bishop Estate and Kamehameha Schools land, the farm manages to produce 70 percent of Hawaii’s demand for watercress, an impressive feat given that it is one of Hawaii’s most popular vegetables. They also happen to grow a delicious and surprisingly versatile product, catching the attention of Slow Foods Oahu, who hosted a tour of the farm on September 4.

It was a beautiful morning on that Labor Day Saturday, and early enough that it was not yet too hot. Immediately, my friend Debbie and I noticed that despite the odd location and surrounding visual cacophony, the farm was a peaceful place. 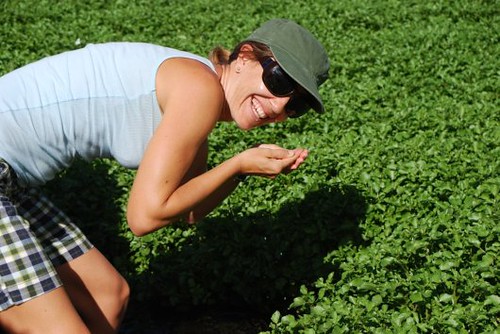 “Wait until you taste the spring water,” one of the Slow Food veterans told us. I was slightly taken aback; I didn’t see any drinking water around.

When Operations Manager and tour guide David Sumida waded into the stream and proceeded to cup a large gulp with his hands, I was shocked to think that water at one’s feet could be clean enough to drink. Granted, I’m a total townie, but to be fair to myself, I was looking at Sears next door!

It turns out the reason the farm is located where it is is due to the abundance of spring water around Pearl Harbor. There are twelve watercress farms in Oahu, each growing a different variety of watercress, but all twelve are in the vicinity of the Pearl Harbor Spring (the rest around Pearl City and Waipahu). Sumida Farm is the furthest east of these farms, and therefore has the highest water quality from the spring.

Indeed, the water tasted delicious—a bit like watercress, in fact. This is because the watercress does not grow in dirt. Instead, it grows directly in the water with the aid of a little gravel so that the roots of the plants can grab onto something. In fact, a crop can be planted just by tossing watercress cuttings into the water. In roughly eight weeks they will become mature plants, ready to harvest. Because there is no soil depletion, there is no need for crop rotation, making the farm very efficient. They grow a dense amount of food in a small area.

The farm also has a history of innovation. It has the first vacuum chilling machine on Oahu that can extend the shelf life of the watercress to one week (versus the usual three days). The machine, now 50 years old, was specially designed in Salinas, California and chills up to 1000 pounds at time to 36 degrees in less than an hour. This process also allows the watercress to be shipped to the outer islands.

The watercress is not exported to the continental United States, however, as Florida grows the majority there. However, demand in Hawaii continues to exceed supply.

Although Sumida Farm is not a certified organic farm, it employs many progressive and sustainable practices, which benefit the farm workers, the farm land, and of course, the product itself. 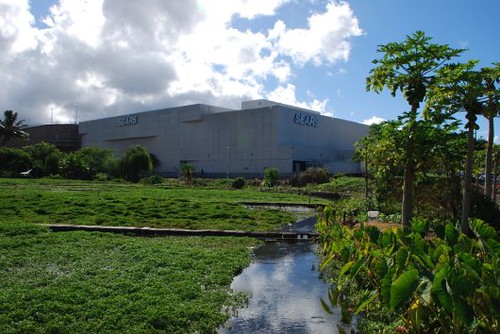 Workers receive full benefits, including HMSA health insurance. They use “integrated pest management”—i.e. “good bugs fighting bad bugs”—to minimize various threats to the crop. For instance, they have brought in surfeit flies to kill their primary pest, the diamond-back moth.

Another nuisance is the local Akekeke, a bird that destroys the patch in search of food. Scarecrows and low-tech clappers made from bamboo are the primary means of warding them off. Spraying is a last resort.

Still, operational costs of the farm are high, including fertilizers, pesticides, electricity, and rent. The Sumidas do what they can to reduce overhead without compromising quality. They do all of their own distribution early in the morning to beat the heat because refrigerated trucks are too expensive. They also do their own marketing in house.

Watercress is a cruciferous vegetable, meaning it is in the same family as broccoli, kale,  cabbage, bok choy, etc ... In other words, it is a nutritional superstar. Packed with vitamins A, C, and B1, watercress is also a good source of iron, potassium, phosphorus, and calcium. It is high in fiber and contains isothiocyanate (good for the lungs) and lutein (for healthy eyes).

Sumida watercress is available at select Safeway, Foodland, and Times stores, as well as Whole Foods and Hawaii Farm Bureau farmers markets.  Look for the red and white twist tie, which designates a bunch of watercress as Sumida.

Watercress is delicious in salads, dips, and soups. It can be blended into a pesto or stir fried. Perhaps the most delicious way I’ve eaten watercress is also the simplest—a preparation that David Sumida shared on the tour and includes in his watercress recipes book:

Watercress with mayonnaise and shoyu

In a bowl, mix together 1/2 cup mayo with 2 TBSP shoyu until well blended. Cut a bunch of watercress into 4-inch lengths and dip away!
According to Sumida, this is one of Hawaii’s favorite ways to eat watercress. It is great for pupus.

Reflecting on the farm tour while munching on my fresh watercress concoction, I pondered the future of agriculture in Hawaii and Sumida Farm’s role within it. Their farm is entrepreneurial and successful, yet intimate and family based. It raises questions about how Hawaii can make make farming attractive to the next generation, since it is unclear what will happen to the farm when David and Barbara retire.

The Sumida Farm also reminds us of how suburban land can be preserved for farming, but not without a fight. Finally, tours such as this one organized by Slow Foods show the potential of successful working farms like the Sumida’s are a model for how local agriculture, education, and agricultural tourism can converge to inspire future stewards of our land. 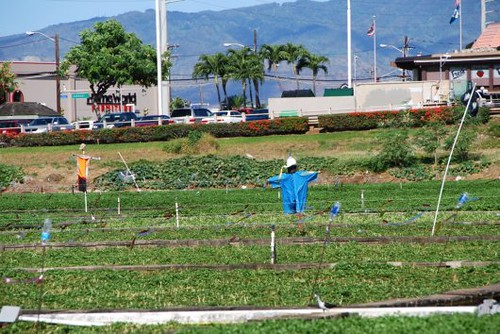