KANEOHE—Tracy Nakano Bean is the Republican candidate for Senate District 24, which is comprised of Kaneohe, Kaneohe MCAB, Kailua, and Enchanted Lake.

Bean is a small business owner and is a graduate of Castle High School and the University of Hawaii at Manoa. Bean has served as an officer in her union, has run a non-profit organization with her husband for the last 12 years, and ran for the City Council in last year’s special election. 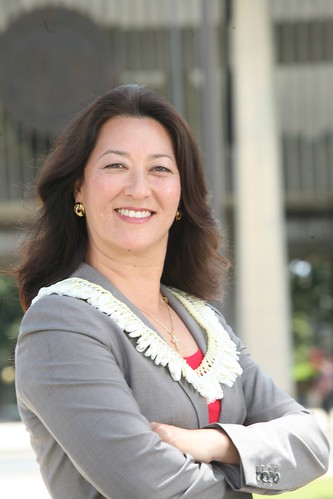 Where do you stand on civil unions? Would you have voted for House Bill 444? Do you think that the debate over gay marriage contributes to gay bashing in our schools?
I believe that House Bill 444 in its final form was worded in such a way as to usurp the rights, independence, and freedom of all persons, irrespective of gender perception. Section 4, page 8, lines 10 through 14 of House Bill 444 gave government the power to define what a “spouse” and “family” are. I don’t think that the framers of the Constitution intended for government to be in such an incredible position of power to define words such as “spouse” or “family” one way or the other. When government defines something, it doesn’t add rights, it takes them away.

The civil unions debate is one that sparks intense controversy and strong feelings on both sides; I for one advocate civility, respect for all persons, and restraint from violence no matter what one believes. The things that make us different on the issues pale in comparison to the things that make us one on matters that really count. President Kennedy said that “in the final analysis, we all inhabit this small planet, we all breathe the same air, we all cherish our children’s futures, and we are all mortal.” I hope that both sides will come to recognize that we need to be fighting for each other, not against one another.

How, as an elected official, will you support and enforce the existing State laws that protect and nurture the rights of Native Hawaiians?
The most important duty of a legislator is to uphold the Constitution, to be fair and impartial in all things, showing justice to all and favoritism to none. Native Hawaiians can rest assured that I will never vote to harm them or take away their God given rights to life, liberty, and the pursuit of happiness.

What kind of tax relief do you support and how else do we lower the cost of living for full time residents?
The type of tax relief that I support is the kind that enables people to keep more of their hard earned money and does not penalize people for being successful. The fastest way to lower the cost of living is for government to stay within its Constitutional limits and not excessively regulate or tax the people. When government gets out of the way of the people, not only will it be cheaper to live in Hawaii, but it will be meaningful again to live here.

How do you limit bureaucracy in government and manage civil work for efficiency?
I believe in a very simple principle: If you can’t afford it, don’t buy it. Unfortunately, government’s track record is to buy things first and then ask the people to pay for it. That’s not right and that isn’t fair to all the hardworking families who are sacrificing just to balance their own budgets and put food on the table. We need to return to a government of the people and by the people.

What ideas do you have for improving our education system? Do you support a governor-appointed Board of Education?
The most important priority before we do anything else has to be an independent audit of the Hawaii Department of Education. Without an accurate understanding of where money is going or what’s working and what’s not, policymakers can’t make educated decisions on how to improve an organization whose mission is educating our children. Transparency and accountability are important steps towards improving our public schools. We also need to work on improving and modernizing our existing schools. As an example, many of our schools suffer from lack of air conditioning and open windows and doors have caused dust and ambient noise such as overflying jets to disrupt classroom instruction. This is unacceptable. Hawaii’s children are our most precious treasure and they deserve the very best in their schools.

I support an appointed school board but will respect the people’s opinion in November.

What’s going to be your input in addressing Hawaii’s “homeless” crisis?
We need to work on the root causes of what creates “homelessness” in the first place. Price inflation, the boom/bust business cycle, inequality of income distribution and debt are all tied to ill-advised government intervention in the marketplace. What many policymakers fail to recognize is that a growing number of persons who work good jobs have to live out of their cars and take showers in beach parks because they just can’t afford rent or a house. “Homelessness” doesn’t just affect unemployed people. I want to prevent people from becoming “homeless” in the first place and for those that are, I want to make it easier for them to have opportunities that can transition them back into owning property and being in charge of their future again.

I also recognize that there are a number of special circumstances that create and perpetuate “homelessness,” which is why I support allowing communities, churches and families—and not solely government—to offset its effects.

How would you improve accountability in government?
Accountability in government starts with transparency. If people don’t know what their government is doing or how their tax dollars are being spent, they can’t keep it accountable. I believe that there should be regular independent audits of government agencies to keep them clear as glass and straight as an arrow in managing the affairs of the people. I also believe that as it pertains to elected officials, we need to have a new generation of leaders who will obey the laws, honor the Constitution and respect the people. If elected, I for one will commit to being fully transparent and accountable to the people.

What is your opinion on Hawaii’s current approach to renewable energy?
I fully support the development of cleaner, more affordable forms of energy to be offered through the free market to the people as I believe we have to be responsible in our use of resources and attentive in our efforts to preserve the environment. What I do not support are taxes, fines, or anti-competitive regulations, which stack the market in such a way as to steer people’s behavior into doing things that they ordinarily would not wish to do of their own free will. Any source that is truly cheaper and cleaner yet still reliable will not need government help to develop or sell.

Do you support legislation that would establish clear definitions and penalties for human trafficking in Hawaii?
Yes, but I also must emphasize that effective enforcement of the existing laws should take top priority before we create new mandates.

Are you aware of concerns Hawaii residents have with the lack of enforcement of child support laws, and do you see a way you could address it if elected?
One of the reasons why government has trouble enforcing so many things is because the Legislature has overburdened our civil servants with so many mandates, so many dos and don’ts, so many requirements that they are often overwhelmed and understaffed to accomplish the job we’ve laid out for them to do. We need independent audits of the process and we need to develop ways to be more efficient and reform our existing procedures so as to get the job done, plain and simple.

In balancing the State budget, what specific government programs or services would you cut?
One of the things that I would start with is auditing the state’s 186+ special funds and identifying through an independent review which funds are actually accomplishing tangible results for the people and which ones are just little more than slush funds. A study by the Grassroot Institute of Hawaii found that there were $1.4 billion dollars in excess special funds over and above their operational requirements—that is, funds were collecting more money than the programs they were assigned to could possibly spend. Several of the special funds had been advised by the State Auditor to be repealed and their balances lapsed into the General Fund as far back as 1992. We need to clean up the special funds. This is the first and best place to start in balancing our budget.

Do you have a modern economic plan that takes into account local agriculture, businesses, and traditions? What about high tech jobs such as film and TV training?
The people of Hawaii know best how to make money, prosper, and build a thriving economy—it’s their government which gets in the way. A famous economist once said that “the more government plans, the harder it makes it on ordinary individuals to plan.” I support a free market where people can make their own choices on what to invest in and for what purposes.

Do you support further development on the Windward side, such as the Envision Laie development in Laie and Malaekahana, a new town in Gunstock Ranch, doubling the size of BYU, and more hotels and timeshares at Turtle Bay?
People have a right to run their own communities and to preserve the kind of neighborhood that they feel most comfortable in. State legislators need to understand that it’s not what we want, it’s what the people want that counts. I know that many people are concerned that development is becoming unsustainable and they would like to preserve the unique spirit and character of their communities. This is something that cannot be decided by any one legislator and should be determined by the agreement of community stakeholders who have had the chance to weigh in and discuss all the potential advantages and disadvantages of new development. If elected, I will be open to being a part of that discussion and bringing people together to find the right solution for the most people.

Read questions and answers submitted by Tracy Nakano Bean prior to the 2010 Primay Election here.