KAIMUKI—On Monday night, close to 100 people gathered at the Kalani High School cafeteria to support Queen Liliuokalani Elementary School. Given that student enrollment is low, at 104, the large turnout indicates how deeply attached Kaimuki is to the school, which also happens to be a vital community landmark.

As numerous people pointed out at the public hearing, Queen Liliuokalani Elementary is the only school in the United States to have been dedicated by a monarch. Next year, the school was planning to celebrate its 100th birthday. The school has deep roots and is a living, breathing legacy of the beloved Queen, who is remembered for her love for the children of Hawaii.

Parents, teachers, administrators, politicians, and other members of the community listed the values Queen Liliuokalani Elementary has for Kaimuki. Some said the small class sizes were beneficial for students. Others recognized the dedicated teachers and staff. At one point, nearly the entire Puasa family, who have sent three children to the school and a fourth who has also been involved over the years, presented their case for saving the school. The family has thrived at this school, they said, where everyone knows their names. Particularly, Queen Liliuokalani Elementary has also proven to be a safe, nurturing, and effective place to educate fourth grader Isaiah Puasa, who has special needs, his family testified.

Another argument presented throughout testimony was that the school’s closure could deter families with young children from moving to the area. This concern is likely the reason both the Kaimuki and Palolo neighborhood boards are formally against its closure.

Lori Yamada, who has served on the Kaimuki Neighborhood Board for 10 years, said the closure could be the “death of Kaimuki town.”

Monday’s emotional testimony illuminates why school closures strike such an powerful cord with our communities. In Hawaii, elementary schools are more than just their test scores and quantitative data. Public schools function as a gathering place for Hawaii’s neighborhoods and act as ties between generations.

The case of Queen Liliuokalani Elementary is complicated by its unique history, which makes the potential closure seem even more short sided to many supporters.

Lynette Hiilani Cruz, a professor at Hawaii Pacific University, likened the closure of the school to “obliterating a historic monument.”

The University of Hawaii Children’s CenterWayne Watkins, director of the University of Hawaii’s Children Center, went further and referred to the school as a “holy place” that is not worth destroying to potentially save $370,000, the figure that the consolidation report cites. That number is also being questioned by local politicians and school supporters.

Testifiers said a lack of transparency and clear procedure throughout the consolidation process has been a source of frustration for everyone involved, especially parents and staff left in limbo.

The threat of closure has been a dark cloud over Queen Liliuokalani Elementary for years, which has likely contributed to the low enrollment that led to it’s downfall.

Devon Petersen, a parent of a first grader at Queen Liliuokalani Elementary, said the school has been “systematically starved of leadership” and essentially set up to fail—there have been nine principals at the school over the past 10 years.

Moreover, there is a sense that closing the school would be mistaken for a solution to the myriad problems with public education in Hawaii, and that smaller schools with strong parent and community involvement are the very schools that should escape the chopping block.

No one at the hearing suggested that budgets are not a concern or that education money should not be spent wisely and effectively, but the school’s supporters do question whether closure would actually save as much money as projected, at least in the long run. Instead, they advocate either keeping the school open in its current incarnation for a specified period, during which it has an opportunity to grow and improve, or finding educational alternatives for the campus, such as a charter school, public preschool, specialized research school, or community center that would perpetuate the Queen’s legacy.

A decision regarding closure is expected by February. 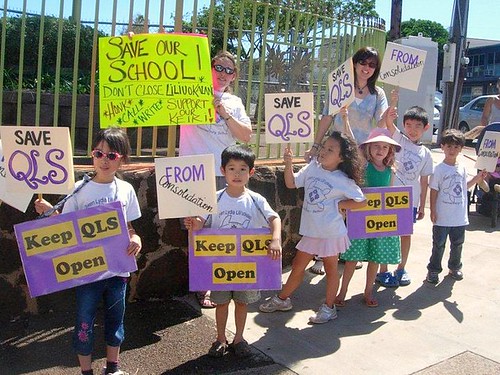