WAIANAE—This Independence Day, Project Hawaii sparks a slew of festivities for the houseless children on the Waianae coast—and they’re looking for help.

The Hawaii Island-based non-profit, run entirely by volunteers, will be taking a trip to Oahu to gather teens for their annual Teen Mentoring Program. And before leaving Oahu for their summer camp, volunteers wanted to do something special for the less fortunate keiki on the Waianae cost.

“[Project Hawaii] gives school supplies every year before summer starts to the kids, and since we were going to be on island, we decided to do something fun for them and then hand out the school supplies after,” said program director Magin Patrick.

On July 4, Project Hawaii will be hosting a carnival for the children living along the Waianae Coast from 11:00 a.m. to 1:00 p.m. at Keaau Beach Park, the last park that allows houseless families to live on the land. In the last few years, the City and County of Honolulu has been enforcing laws to deter houseless people from finding shelter—such as banning tents and shopping carts—despite the governor declaring a statewide homeless crisis. In 2006, Gov. Linda Lingle officially declared houselessness in Leeward Oahu a “major disaster and catastrophe.”

The Independence Day event reaches out to families and is planned to provide fun and easy games, like the penny toss and ring toss, for the children to enjoy, where prizes are much more valuable then a plush animal or sugary treat. Instead of receiving a soda after tossing a ring on it, keiki will get a bottle of shampoo or a bar of soap.

“This is the first time we are doing the Fourth of the July event, so we wanted things not too complicated and figure out what was easiest to setup and take down,” Patrick said. “We wanted to make it easy to setup with lots of giveaways. We are also giving out lots of new clothes, slippers, and hygiene bags,” said Patrick.

Project Hawaii will travel to Waianae on the June 30 to hand out hygiene bags to families as part of the invitation to the Fourth of July activity.

Currently, Patrick and the handful of volunteers working with her are pushing for more volunteers and donations for the event. With the surprising lack of support for the first time event, Project Hawaii is mainly concerned about giving the children a good lunch as they are looking for companies to donate food and time.

Even with the low volunteer and donation numbers, Patrick is relentless in putting on the activity for the children. Patrick said even if she is the only one face-painting or going to the store to buy the food, she is excited regardless of the outcome.

“It’s in the morning where kids aren’t doing much and we held it early so we don’t take away from any planned family gatherings,” said Patrick. “Our main goal is for the kids to have a good day and good lunch on the special day, that’s what matters the most.”

Project Hawaii was designed through the partnerships of the Christmas Wish Program Inc., and Cultural Institute of America to provide life services to children living in poverty and crisis situations in Hawaii, particularly on Hawaii Island and Oahu. Founded in 2006, Project Hawaii is solely supported by public donations and fund-raisers and has been successfully running year-round programs for houseless children including summer camps, afterschool tutoring, and other supportive programs. 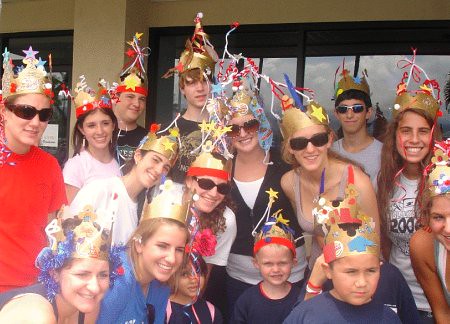