LAIE—It was an overcast and rainy morning for the dedication and maile untying ceremony for the Malaekahana Bike and Pedestrian Path on Saturday near Gunstock Ranch Road. The event drew approximately 500 people. As part of the Envision Laie development, the 8-foot-wide path is nearly a mile-and-a-half long, sitting about 15 feet from the highway and runs between the Kahawainui and Malaekahana bridges.

Various community groups and residents came together for the construction of the path. Envision Laie representatives are calling the path a “collaborative effort between landowner and primary sponsor, Hawaii Reserves, Inc. (HRI), the Laie Community Association (LCA), the Kahuku Community Association Operating Engineers Local Union 3, and community residents and businesses.”

“The volunteers put so much time and effort into making it look good. It’s a excellent example of how a community can work together,” said Kevin Schlag, LCA board member and director of Web Development and IT Projects at Brigham Young University-Hawaii (BYUH).

Although the path isn’t yet officially open, community members are already utilizing the bike path, which took about three and a half months to construct, Schlag said.

Honolulu City Councilmember Ernie Martin and State Representative Gil Riviere were both in attendance for the ceremony. 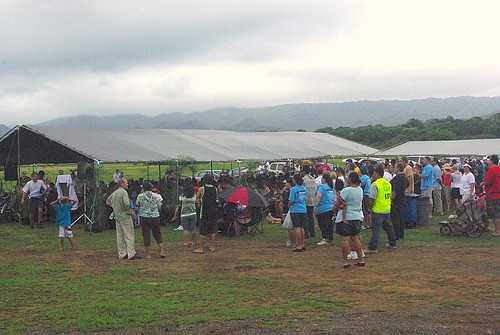 “The path is to promote better health, increase safety, provide another mode of transportation, decrease traffic, and it’s good for the environment,” said Eric Beaver, president of Hawaii Reserves, Inc., the developer of Envision Laie.

Beaver said that the idea of a bike path existed for a while and that it fit into the Envision Laie development.

“It seemed like a good thing to start with, and we own the land so we’re able to facilitate it,” Beaver said.

The bike path is the first part of the Envision Laie project guided by The Church of Jesus Christ of Latter-day Saints that will create a new set of subdivisions collectively called Malaekahana just west of Laie that will rival the populations of the other towns in the Koolau Loa region.

The plan would require widening parts of Kamehameha Highway, condemning some properties along that road, as well as seizing some kuleana lands for roads that connect BYUH to the proposed developments.

The Envision Laie project has been a subject of controversy on the North Shore since its beginning in 2008. The project has a strong following of proponents, who claim the project will promote sustainability, and opponents who see the project as further development of the “country.”

Envision Laie also has plans to build a 220-room Marriott hotel on the North Shore, which many residents in the area are uncomfortable with. Envision Laie describes the hotel’s theme as “contemporary Hawaiian,” and the buildings will be staggered between one, three, and four stories in an attempt to stay within the city code’s 40-foot height limit. The development has been estimated to cost approximately $25 million to build, and will measure approximately 150,000 sqaure feet. The new Marriott is expected to open in September 2013, coinciding with the Polynesian Cultural Center’s 50th anniversary.

The population increase will be considerable—BYUH alone expects to increase its student enrollment from 2,780 to over 5,000 in the coming years.

Koolau Loa residents have raised concerns that because of the growth of BYUH and the planned Envision Laie development, the local community is being squeezed out of affordable housing and jobs.

“Hundreds of new BYUH students and families already flooding into rural Koolau Loa is causing an even worse affordable housing crisis,” said KC Connors, an outspoken North Shore activist who is against the Envision Laie plan. “BYUH has built no new dormitories, but continues to bring in even more students. This pushes local people out of low-income affordable rentals up-and-down Koolau Loa.”

However, there are supporters of the development and those in attendance today showed gratitude and appreciation for having a bike path in their community.

“I’m excited and grateful for the new path,” said Pam Palmer, a Kahuku High and Intermediate School teacher who has been riding her bike from her home in Laie to work. “My daily commute is now much safer and a lot more fun.”

Carol Yuen, another Kahuku High teacher, bought a bike as soon as she heard the path was nearly complete. “I now ride my bike to school and home everyday,” Yuen said, “I feel much safer on the path than on the road. I actually enjoy exercising now.”

Because the bike path isn’t yet complete, Schlag invited community members to volunteer to continue helping with the path. He said they could adopt a tenth of a mile section of it to “pick up rubbish and do some weeding.”

Saturday’s two-hour long event included an oli, dedication blessing, maile lei untying ceremony, huli huli pigs, and a raffle that saw approximately 20 bikes given to community members. Stanford Carr, the developer who plans to increase Turtle Bay from around 500 hotel and condo units to 4,000 units, donated 15 bikes to the raffle.

The Malaekahana Bike and Pedestrian Path joins the North Shore’s popular Ke Ala Pupukea Bike path, which is busy daily accommodating people riding bikes, skateboarding, pushing strollers, and jogging, as a healthy transportation alternative and a social link. Schlag said community members involved with the Ke Ala Pupukea Bike Path provided wisdom and council during the construction of the Laie path.