Today’s Army presentation “by invitation only” at the Pohakuloa Training Area (PTA) about Baseline Human Health Risk Assessment for Depleted uranium (DU) was a real dog and pony show. Of the 50 to 60 in attendance, it appeared that I was the only token opposition community member.

Most in attendance were military people of various types and military contractors, along with a scattering of elected officials including State House Representatives Jerry Chang, Mark Nakashima, Faye Hanohano, Clifton Tsuji, and County Councilman Pete Hoffman. There may have been a few others that I did not recognize, but clearly there were a lot of people in military uniform: Army, Marines, and representatives of the Navy, perhaps Air Force too. A separate meeting was held for the press prior to the “invited guests” meeting. 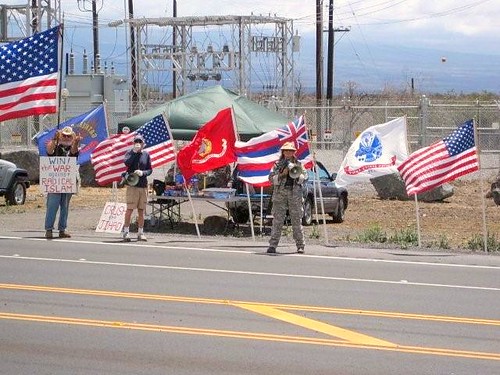 There were eleven screaming “Gathering of Eagles” with over 30 large American flags hurling insults toward us on two bull horns from across Saddle Road. It’s amazing how disrespectful some people can be in the name of protecting “freedom and democracy” and “family values.” Though Hawaii has paid a heavy price under U.S. occupation, the people of Iraq and Afghanistan have it worse under U.S. bombs and widespread DU poisoning and destruction of their homes, infrastructure, and land.

The person who did the power point presentation was Greg Komp, senior health physicist of the Office of the Director of Army Safety, Washington, D.C. Komp is the same guy who was quoted in an August 30, 2007 Army News article who said: “Today DU is not used in military training, but in the 50s and 60s it was used anytime you needed a heavy weight.” By his own admission, there is reason to believe there is a lot more DU at PTA and other military ranges. The Army said that DU has been banned in training since 1996. But given the fact that Davy Crockett DU spotting rounds have been officially used in Hawaii since 1962, that leaves a lot of room for other DU rounds used besides Davy Crockett.

It appears that the Army really doesn’t want to know how much DU has been used at PTA. It doesn’t want to risk having to shut down the base if it is determined that the presence of DU and the stew of other military toxins pose a threat to the health and safety of the troops who train at PTA and residents and visitors of Hawaii Island. While the Army says that health and safety is the primary concern, in truth, it is continuing the military mission that trumps all other concerns. That’s why the community has been stonewalled from day one in this entire DU investigation. The community has not been welcomed as equal partners. The process has not been transparent and therefore the confidence of the community is sorely lacking when it comes to military assurances that “DU poses no health dangers.” Or that “hypothetically exposed persons are below EPA acceptable risk range.”

The military made health assurances to troops and residents in the early days of atmospheric atomic bomb testing. They said much the same thing about agent orange exposure during and after the war in Vietnam, Gulf War syndrome, etc. etc. all to be proven eventually wrong, and in some cases deliberately misleading or lying to the troops and the public.

If the military really wants to be transparent, the Army needs to come out of its bunker, its protected and controlled “Green Zone” on Hawaii Island, and meet and treat the people in the community with respect. They have repeatedly refused to participate in balanced public forums in the community.

Democracy is not by invitation only. The winds, dust devils, and vehicles that travel through Pohakuloa travel around this island. Everyone on this island is potentially at risk from military radiation contamination at Pohakuloa, which may be far greater than one weapon system called Davy Crockett. We won’t know the truth until there is comprehensive independent monitoring and testing of the entire PTA base and what’s coming off that base.

Meanwhile, as a precaution, the military should respect the Hawaii County Council resolution passed July 2, 2008 by a vote of 8 to 1 that called for a halt to all live fire and activities at PTA that create dust until the DU present is cleaned up. But the Army doesn’t want to clean up. They want to leave the DU in place and continue bombing. The Army talks the talk about being “environmental stewards, protecting the environment.” Let’s see how green the Army really is. It’s time to walk the talk and stop the bombing! Then clean up your mess, not only at PTA, but all over these islands, and return the land to the sovereign independent Nation of Hawaii.