NORTH SHORE—Hundreds gathered at the Kahuku High Cafeteria on Wednesday, June 1 to testify on plans for a new hotel in the area that is part of the larger Envision Laie development.

The Honolulu City and County Committee on Zoning met to discuss the application filed by Hawaii Reserves Inc. (HRI) for a Special Management Area Use Permit (SMP). The permit is necessary to build the proposed 222-room, four-story Marriott Hotel because of its proximity to the shoreline and is required before construction can begin.

After two hours of community input, both in support and opposition, the Committee on Zoning approved the application. The proposal will go before the full City Council in July.

The hotel is planned to be constructed at the former site of the demolished 49-room Laie Inn and is part of the larger controversial project Envision Laie, also proposed by HRI and guided by The Church of Jesus Christ of Latter-day Saints. The project will, most significantly, create new subdivisions collectively called Malaekahana just west of Laie that will rival the populations of the other towns in the Koolauloa region.

Envision Laie planners describe the hotel’s theme as “contemporary Hawaiian.” The hotel’s buildings will be staggered between one, three, and four stories in an attempt to stay within the City 40-foot height limit. Construction has been estimated to cost approximately $25 million and will measure approximately 150,000 square feet.

The hotel would also include a pool, restaurant, and banquet/meeting hall. There are also plans for a new stand-alone McDonald’s, a new two-story commercial building, and the relocation of Laie’s current Chevron gas station, according to an architect working on the project.

The Hawaii Coastal Zone Management Program describes the SMP permit as part of a regulatory system that is the “cornerstone” of the program and provides guidance through State law for managing coastal development. Each of Hawaii’s counties has its own guidelines and rules for SMP permits indicating where the SMP permits system regulates development within a geographically defined area extending from the shoreline inland. Within each county, SMP boundaries may range from about 100 yards to several miles inland from the shoreline.

Jeff Overton of Group 70, the architectural firm working on the hotel, said at the meeting: “There will be no significant impact to the coastal zone. We believe the financial impact will be good, creating 153 jobs, 75 directly open to the community, and it will keep families together.”

Overton said the hotel will help the economic vitality of the area and will produce $8 million in net public benefit.

A majority of the meeting’s attendees who expressed strong support of the hotel wore light blue Envision Laie t-shirts in support of the entire project.

One Envision Laie supporter said he was a life-long resident of the area. “We want this hotel,” he told City lawmakers. “We need a place for family to stay. We support the hotel. And to the people who don’t want the hotel—so?”

Supporters of the new hotel pointed to the new jobs that would be created and said there would be only a slight increase in traffic. Supporters also pointed to the convenience of having a place for visiting families of Koolauloa residents to stay at. The hotel would be approximately a 10-minute drive from the existing Turtle Bay Resort.

David Tanoue, director of the Department of Planning and Permitting, said the HRI met all requirements in its application for approval and that a 15-foot wide public beach access will be created for Oahu residents.

Tanoue said the project will have “no adverse impact on the area.”

Opponents to the new hotel, however, said it would create traffic, environmental impacts, and view obstructions. Opponents also pointed to Laie’s history of flooding as reasons to prevent the hotel from being constructed, or at least require HRI to scale down the hotel plans drastically.

“What happens in Laie doesn’t stay in Laie, other communities will be affected by this,” Vandeveer said. “The cumulative impacts of a four-story, 222-room hotel, BYUH expansion, and the urbanization of State ag lands must be considered together and within the context of numerous other developments. We’re not against development, just bad development.”

Co-chair of DOC Kent Fonoimoana gave a presentation on the flooding of the area and said not enough precautions have been taken.

“The EA [environmental assessment] for the hotel was done in July 2008, and the last flood was in December 2008,” Fonoimoana said. “Because of the this alone, the City should have been challenged to take another look at the EA. If this gets done, it needs to be done right. Not just for the people in blue shirts, but for the whole island.”

Committee Vice-Chair Romy Cachola complimented Fonoimoana’s presentation, then called Overton and HRI president Eric Beaver to the microphone for their response to the flood presentation.

“Based on the current requirements of the City, we’ve created a drainage plan that creates a 10 percent net decrease,” Beaver said, adding that he thought they had already addressed all the flooding issues.

The new Marriott is expected to open in September 2013, coinciding with the Polynesian Cultural Center’s 50th anniversary. 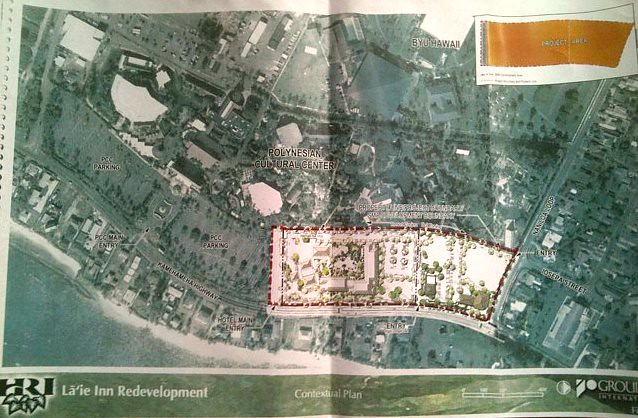