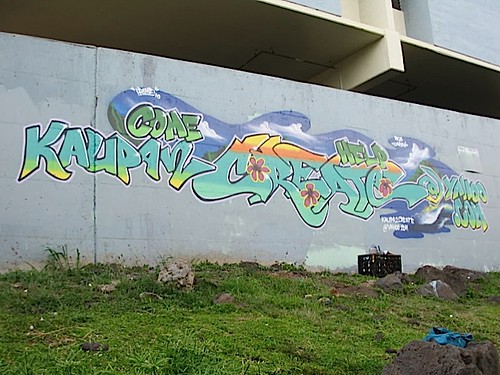 The aim of the mural project is to visually represent the cultural, environmental, social, and political issues and stories of the community.

The project is one of many organized by KAUPA to instill pride in the surrounding community. The nonprofit was formed as a way to revitalize Kalihi, a bustling, multicultural community, formed by long-time residents and newcomer immigrants from across Asia and the Pacific.

KAUPA volunteers also recognize that much of Kalihi is overshadowed by poverty. Of Kalihi’s 46,500 residents, 17.1 percent receive public assistance income, and 22.8 percent of families with children live in poverty, more than double Hawaii average, KAUPA reported in its monthly newsletter. Per capita income in Kalihi is in the lowest 25 percent of the state. Kalihi is home to overcrowded public housing, including some of the largest public housing projects in the state.

KAUPA stated in its newsletter: “Although there are many social and environmental problems in the Kalihi ahupuaa, KAUPA believes that the opportunities far outweigh the challenges. Kalihi’s people of diverse cultures and backgrounds have a wealth of expertise and innovative ideas that can help to solve the community’s problems. The Kalihi ahupuaa still has many pockets of natural areas, and native species, though rare, can be found in the lowest and highest reaches of the stream. Finally, Kalihi is home to many willing partners that have demonstrated their commitment to improve their community, and believe that environmental change can lead to social change.”

Since 2007, KAUPA has touched many lives, educated thousands about the ecology Kalihi Stream and removed countless tons of trash, metal, and green waste from dozens of sites along the stream during its monthly stream cleanups.

KAUPA applies traditional Hawaiian watershed management practices and good science to improve the environmental quality of the Kalihi watershed. Hundreds of native plants have been planted along Kalihi Stream. KAUPA also provided an ecological and cultural curriculum for students at Kalihi Waena.

KAUPA hopes to raise $5,000 by March 31, or the non-profit faces dissolution. Donations of cleanup supplies such as heavy duty garbage bags and gloves are also being accepted.

Credit card donations can be made at www.networkforgood.org.

Checks can be sent to: