HONOLULU—A college professor and a career rock-‘n’-roller opened a diner in Chinatown. No punchline here. It’s the beginning of the story of the Downbeat Diner & Lounge—a story that may change the way people think about dining and nightlife in Chinatown.

The college professor is Serena Hashimoto and the rock and roller is Josh86, the stage-named frontman of Black Square, 86 List, and ringmaster of any number of live music showcases across Oahu for years running. Hashimoto has served as band manager in Josh’s various projects over those years, and the two have developed what is clearly a productive and fruitful working relationship.

Downbeat opened for business on New Year’s Eve 2010, after three weeks of frenetic renovations to the former Misty’s Chinese restaurant on Hotel Street. Serving traditional diner fare with vegetarian and vegan options for each and every menu item and open until the wee hours, Downbeat has developed a business model with potential for lasting success.

“We really wanted to be in Chinatown,” says Hashimoto. As a professor at Hawaii Pacific University, she has become a part of the Chinatown milieu, and Josh has been playing shows in the area since Chinatown began its resurgence as a cultural hub in Honolulu.

Three weeks is not a lot of time to remake a Chinese restaurant into a hip and functional diner, but the owners were able to pull it off with the help of a small army of bandmates and supporters. Every detail, down to the custom upholstery of the booths (created by Josh’s sister) is the result of a group effort.

Both owners have managerial experience in the restaurant industry. Josh has held jobs at The Contemporary Museum and Honolulu Academy of Arts, working multiple gigs to pay the rent. Downbeat is now his mainstay. “I went from having three jobs to having no job,” Josh says wryly of his latest endeavor. 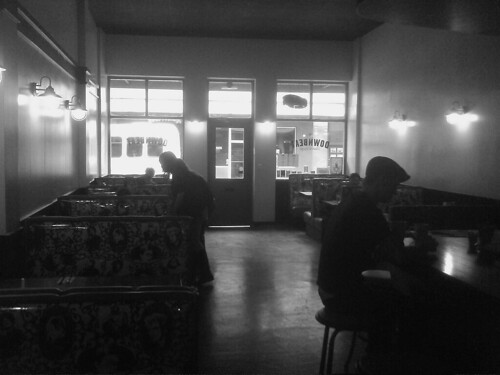 Downbeat’s identity, while new and growing, is the result of careful consideration and collaboration between the owners. It would have been easy to go with a clichéd retro theme, to pander to the prosperous visual arts community in Chinatown or to its vibrant music scene, but Josh and Hashimoto opted to focus on providing food and service that has been surprisingly absent in the area for a long time.

“Obviously, we want there to be a strong musical component to what we do,” says Hashimoto. And while open to the idea of occasional musical performances, Downbeat is not likely to become a performance venue. It should be noted, however, that the owners spar playfully over the idea of a karaoke night.

Key to the success of Downbeat will be the support of area workers, the daytime clock-punchers and night owl bar industry folks that serve and spend the bread and butter of Chinatown.

With a liquor license pending and a menu to please even the most vigilant vegans and devoted carnivores alike, Downbeat appears to have channeled the desires of just about everyone who lives, works, and plays in Chinatown.

“The workers around here have been very supportive,” says Hashimoto. “They realize that we’re not here to compete.” Those workers perhaps also know the value of having a nearby, late-night option for grabbing a much needed bite to eat after a closing shift, an option that isn’t Zippy’s.

Downbeat offers breakfast all day and night, and an assortment of hand-made desserts to make any sweet tooth swoon.

Downbeat uses only Big Island grass-fed beef for its meat dishes, all of which have sensible vegetarian and vegan options.

With a 2:00 a.m. liquor license, hours until 4:00 a.m. and two owners with a track record of successful endeavors, Downbeat is poised to become a Chinatown icon.