HONOLULU—The theatre of the mind is such a wonderful thing. Imagination can take a windowless, basement operation and turn it into a tower. That’s what I routinely hear from people who see Hawaii Public Radio production studios for the first time. “HPR sounds bigger,” they say.

Take the talk studio: It’s maybe 7’ x 7’ of really usable space, not square, which rather appeals to me. And while Control Room 7—or CR7 for short—is functional, it’s not beautiful, at least in the conventional sense. Mostly outfitted in an inelegant pallet of grey, it’s still an improvement over the dusty mauve scheme from 10 years ago. (If you want a peek at that, it’s aging none too gracefully in two of the yet smaller news department editing rooms.) A round table dominates CR7. Four microphones arc over guests’ heads, a weird bouquet of wires, metal arms, and springs suspending the sweet spot just at mouth level. Above them, stained ceiling tiles tell the tale of a water leak several years ago, spot lit by track lighting that isn’t yet as green as it should be. Around the top half of the walls, corrugated sound absorbing foam has a few minor gauges, too. That said, this room contains the cold like no other HPR space and is the reason for the heavy sweater on the back of the only-thing-not-grey, a claret chair.

But I love this room. I love what it stands for: living within a budget provided by a business model that works. 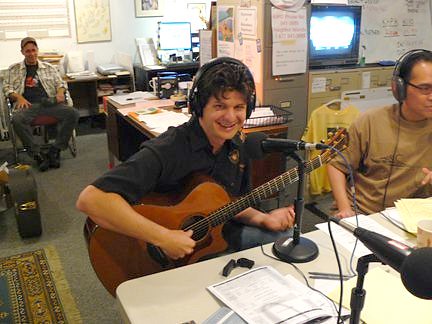 Twice annually, Hawaii Public Radio engages in what may appear to be the most nonsensical, ridiculous endeavor: Over the course of a scheduled 10-day campaign, we ask people for money to keep the station running and buy programming from a variety of sources, among them, PRI, BBC, CBC, and yes, NPR. Diehard community supporters give repeatedly, give memberships as gifts to children, sometimes to a cat or dog—any reason to make a pledge. Hundreds of volunteers donate hours, even days, to answer phones, tabulate pledges, or see that everyone is well fed and watered. Community leaders come on air with staff to exhort listeners to make the leap and become members, too.

What binds them is a driving need for Hawaii Public Radio to thrive, to keep on the air the mirror that allows our community to regard itself and the often inside-out look at the world. After almost 30 years, the amazing part is that not only does this wacky thing work, it’s working better than ever. Over 65 percent of HPR’s $4 million budget comes from individuals. Only 25 percent of operations is funded by foundations, corporate gifts, and underwriting. In a media landscape where mastheads are turning to tombstones, consolidation of commercial networks have stripped newsrooms. The lure of a quick information fix from the Internet has forever changed the business of journalism.

Thankfully, as we’ve seen in Hawaii, people still want public radio. And they want it to succeed. 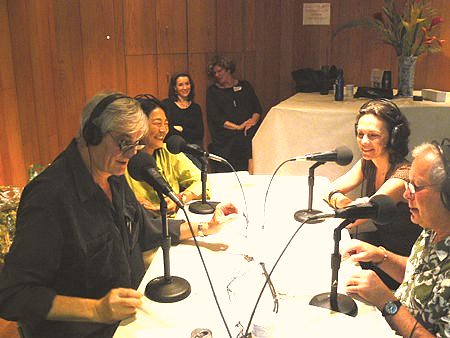 Maybe it’s the fact that Hawaii Public Radio is locally licensed and operated, a community conduit responsive to its listeners. Or perhaps it’s because our human need to connect with each other through our voices and not just text or pictures on a page has become more acute as increasingly more of us outfit ourselves with smart phones and laptop minis. More likely it’s the realization that public radio is the last broadcast medium where public interest routinely trumps profitability.

Within these talk studio walls, that translates into time to hear each other discuss the issues that live in our collective gut, the ones we carry with us from the specter of domestic violence to coping with an economy struggling to find its feet. Politics, public affairs, health, the arts, and nonprofit sector are just some of the conversations the walls of CR7 absorb. Whether or not we agree isn’t the point; having a place to air meaningful, civil discourse is.

Thursday night, during a “best of” edition of the Town Square talk show, HPR aired part of my conversation with Israeli Consul General Jacob Dayan, originally broadcast last August. It had been the show many people had asked to be rebroadcast. Halfway through the show, an angry listener called to register her anger that KIPO would broadcast such “propaganda.” Nevermind that in the hour that followed we talked about the breathtaking collection of Islamic art at Shangri-la with the Doris Duke Foundation’s Executive Director, Deborah Pope; nevermind that Town Square discussions have regularly included updates from pro-Palestinian Hawaii residents who have gone to Israel and come home to share a far different point of view. It’s sometimes just the timing of who hears what and when. The walls of CR7 witness polar perspectives aplenty and those perspectives serve to deepen the reason this studio is here: We need it.

Although Town Square and the other three other locally-produced talk shows are broadcast from CR7 each week, this studio doubles as my office. Frequently during the pledge drive, it also becomes a spot to sit down and chat or provide a quiet place to gather thoughts—my tapping on the laptop notwithstanding. That’s part of the disclaimer I offer when anyone says, “Can I be in here for a little while?” Invariably, a conversation ensues. A face-to-face warm blooded exchange with someone who looks me in the eyes and shares the same breathing space of this little room is a perk. “Did you hear?” is the frequent opener, followed by a passionate recounting of a recent story or talk show topic. After a pause, members often glance around the studio. “You guys sure aren’t putting money into décor.” Nope.

Beth-Ann Kozlovich is HPR’s Talk Shows Executive Producer and host of Town Square, soon to launch into its 12th year. The Town Square and other talk show archives are available at www.hawaiipublicradio.org. HPR’s fall pledge drive, Celebration 2010, is projected to run until October 22, although an early (or late) finish is strictly in the hands of those who call to make a pledge to help raise the necessary $808,000.