HONOLULU—It is impossible to be human and not hurt someone. It’s part of the human condition—we damage each other. We may be guilty of small slights, unthinking insensitivities, unwitting or deliberate abuse, thwarted dreams or huge planned indiscretions. Some of us may even be the instruments of pure evil. For those wounded by the acts of a parent, a trusted friend, the government, the world at large, and unspeakable acts of evil, how can an unforgiveable act be forgiven?

Father Michael Lapsley asked himself that question over 20 years ago. Lapsley is an Anglican priest from South Africa and director of the Institute or Healing Memories. In April 1990, three months after Nelson Mandela’s release from prison, he was in Zimbabwe when he received a letter bomb from South Africa. In the blast, he lost both hands, the sight of one eye, and was severely burned. He has never found out who sent the bomb, and that has made forgiveness difficult, but not impossible.

“I’m a bit of a fraud in this debate,” Lapsley says. “I don’t know who sent the letter bomb, who made it, or who gave the orders. I often say I’m not full of hatred, I’m not bitter, I don’t want revenge, but I haven’t yet forgiven anybody, because in my case there is no one yet to forgive.”

Political forgiveness, he says, is a little different. A national way of being, an ideology that foments and perpetuates hatred as did the decades of apartheid may not ask for forgiveness soon enough—if ever—to help free the victim. Although there may not be specific perpetrators one can identify and confront (as in his case), Lapsley believes the benefits of moving out of the chronic anger zone is a matter of enlightened self-interest.

“In the end, it’s for your own sake,” Lapsley explains. “Sometimes we have to cough or vomit out that poison step by step. We begin to let go of it. Sometimes it’s not a one-off, we have to keep revisiting it.”

Lapsley is in Hawaii this month, sponsored by the Church of the Crossroad, and has already spoken with several groups, including the State Judiciary, Hawaii Pacific University, and The Forgiveness Project. He hopes that when he gets back to Capetown later this month, someone will knock on his door, confess, and ask for forgiveness. But then, he has been hoping for this for much of the last two decades. Lapsley freely admits that were it to happen, he might first faint from surprise. Nevertheless, he would like to know the parallel journey of the person who ended the life Lapsley had, what the letter bomber is doing now and what, if any, good has come of him.

“I believe a hundred thousand times more in the justice of restoration than the justice of punishment,” Lapsley says. “Often when we say ‘justice,’ we mean ‘punishment,’ if not ‘revenge.’ But there is another kind of justice ... So I might sit down with this new friend and drink tea and say I have forgiven you, but I have no hands, I have one eye, my eardrums are still shattered. I’ll always need someone to assist me for the rest of my life, of course you’ll help pay for that person because restitution and reparation are also part of the journey of forgiveness. The saying ‘sorry’ is just a step in the long journey.”

So is the taking of political revenge. Lapsley says he is “not just a little, but extremely” discomfited by the gleeful, almost party-like atmosphere that broke out last week around America in reaction in to the announcement of the strategic killing of Osama bin Laden.

“I think notions of vengeance and revenge are totally understandable when horrible things have been done to us or to those whom we love,” Lapsley says. “But they feed a dark, shadowy side of us as human beings and can never truly bring satisfaction. One would hope that people in the United States—and indeed around the world—would pause for reflection and ask how can we end this cycle of war, hatred, and revenge? My favorite definition of revenge is when you drink poison and hope someone else will die.”

“My favorite definition of revenge is when you drink poison and hope someone else will die.”

Learning how to forgive, how to ask for forgiveness, and offer an apology are not simple, Lapsley says, but worth the effort.

First, there must be the acknowledgement that something hurtful or horrible happened. In the best situations, that means both parties should be ready to talk and ready to hear the pain.

But, Lapsley stresses, there are no guarantees: “You can say, ‘Darling I’m sorry,’ and Darling says, ‘I’m hot [angry], come back tomorrow.’ Darling may need to be convinced that you’re sorry.”

Sometimes, Lapsley continues, people just want to watch your actions to see if they sync with your words—and that’s a fair enough test.

If there is a bottom line reason to seek forgiveness, Lapsley says it’s to create psychological and physical wellbeing, and that it’s okay to be selfish and noble at the same time. 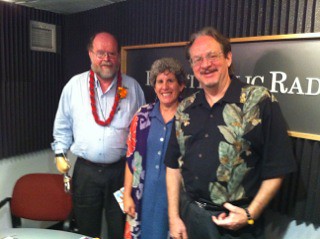 The entire interview with Father Michael Lapsley, Elizabeth Kent from the Judiciary’s Center for Alternative Dispute Resolution, and Michael North from The Forgiveness Project is on the Town Square archive www.hawaiipublicradio.org. Reach Beth-Ann Kozlovich at [email protected]