The following story was recognized as a finalist in the 2011 SPJ Hawaii Excellence in Journalism Contest for the category of: ‘Column Writing or Blog/Features or Sports’

WAIKIKI—The Diamond Head Tennis Complex (DHTC) is undergoing a long-awaited makeover. The ten-court facility, nestled between Kapiolani Park and the slopes of Diamond Head, boasts some of the oldest and beloved courts on island.

A stone’s throw from Waikiki resorts and condos, DHTC is enjoyed by locals, tourists, and part-time residents alike. The facility has been free to the public since 1972, when the City and County of Honolulu took over the formerly small, private club and added six courts. The result was a truly democratic tennis environment in a five-star location, and therefore a tremendous asset to the diverse surrounding community.

Unfortunately, many factors led to the undeniable deterioration of the once world-class facility that attracted everyone from pros to amateurs.

The most obvious problem was the ratio of use to maintenance, which was exacerbated in recent years with the City’s economic woes and cuts to the Department of Parks and Recreation.

Compounding this issue was the City’s shift in focus to the newer 20-court Patsy T. Mink Central Oahu Regional Park (CORP) Tennis Complex in Waipahu, which opened in 2003, and the resulting displacement of DHTC as a primary site for tournaments.

By 2008, the miserable state of the courts and grounds had generated enough complaints to attract media attention and an acrimonious series of exchanges between DHTC regulars and the City. There had been efforts on the part of certain individuals to beautify the facility, but without the City’s cooperation, the primary problem of large cracks on the courts could not be properly addressed.

The damage was more than aesthetic. Water damage was causing bubbling and cracks to the surface that affected the bounce of the ball and therefore the quality of play. There were also cracks wide enough that a shoe could get caught, meaning that they posed a safety hazard as well. Several courts were on the verge of having their nets removed and being closed off.

In December of 2009, a group of several DHTC regulars came together to find an expedient and amicable path to restoration. The result was a non-profit organization called The Friends of Diamond Head Tennis Association. Its board consists of 12 tennis enthusiasts from a diverse range of backgrounds who pooled their talents and resources to devise a strategy to save the facility.

In one short year, the group was able to raise $30,000 in donations from the community as well as convince the United States Tennis Association (USTA) to contribute an additional $30,000. They accomplished this impressive feat through a series of fundraising events and parties, including a USTA tournament, as well as word-of-mouth solicitations.

This idea of public/private partnering, of working with the City instead of merely assigning blame, is a refreshing one with broad implications.

The Friends of Diamond Head Tennis members had a valid argument on their side: that playing on these courts for free is a tremendous amenity and privilege; most comparable facilities elsewhere charge high monthly fees.

The resulting $60,000 collected, plus the City funds allocated towards restoration, was enough to make serious improvements to the facility. But having the money isn’t always enough.

Since it is a City-owned facility, the work would be within the jurisdiction of the Department of Parks and Recreation and done according to its timetable.  Convincing them that DHTC was a priority that required a careful balance of assertion and finesse.

Friends of Diamond Head Tennis board member John Velpri attributes much of the organization’s success to the tremendous “group effort” on the part of everyone involved. He points to the long-term commitments of a few key people who led by example and the fact that the majority of the DHTC community, regardless of their financial situation, contributed something to the cause.

The group has also successfully implemented an Adopt-A-Park program, where the members work with the City to pick up trash, assist with grounds keeping, and help with other maintenance.

Currently, courts 1,2,3, and 4 were closed for resurfacing as of December 15, and tentatively scheduled to reopen on January 28. 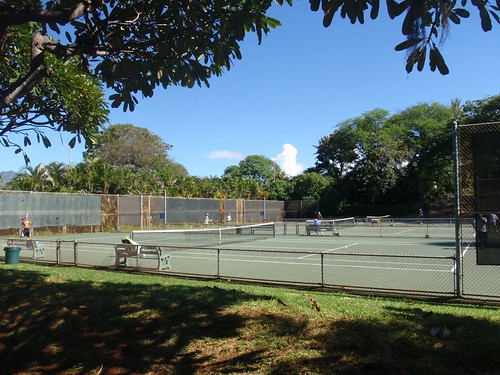 A letter currently hanging on the DHTC’s notice board from Lester Chang, acting-director of the Department of Parks and Recreation, states that the City will continue to “work in partnership [with the Friends of Diamond Head Tennis and the USTA] to address repairing the remaining courts ... [to] be phased to keep some courts playable at all times.”

This idea of public/private partnering, of working with the City instead of merely assigning blame, is a refreshing one with broad implications.

Instead of merely voicing or tweeting their frustration, a group of individuals focused their energies in a productive and professional way. The Friends of Diamond Head Tennis held frequent meetings, pooled their skills and resources, divided up and followed through with the tasks at hand, employed a heavy dose of diplomacy when working with the City, and largely achieved their goal in less than one year.

Granted, the board of the Friends of Diamond Head Tennis is comprised of Baby Boomers, who tend to have more experience and time to lend to a cause, but their model should serve as an inspiration for community-minded people who are looking to revamp a derelict public playground or clean up a popular surf spot.

Friends of Diamond Head Tennis is still looking for donations, as there are many other improvements to the facility beyond the resurfacing of the courts that need to be made, such as, but not restricted to, repair and maintenance to windscreens, benches, nets, and landscaping.

For more information, or to make a tax-deductible donation, visit http://www.friendsofdiamondheadtennis.org/.