The following is the final installment of a three-part series that examines opportunities and challenges confronting Kauai in the new decade. Click here to read part one and part two.

KAUAI—One of the best ways to predict the future is to simply make it happen, according to David Burney, a paleoecologist and conservation director for the National Tropical Botanical Garden.

Already documented to be growing warmer, drier, and more prone to flooding, scientists at the University of Hawaii and elsewhere say climate change in Hawaii will impact every ecosystem from reefs and wetlands to dry, mesic, and wet forests in the highlands. In considering how these changes, combined with the advance of invasive species, will affect Hawaii?s plants and animals in the next decade and beyond, Burney is blunt.

?Possibly dozens of plant species will go extinct in the next 10 years. Quite a few are incredibly close right now despite a lot of talented, innovative people focusing on conservation,? Burney says. ?But there are some rare species that, if recent successes in conservation strategies continue to work, may become less rare and quite a few may hold their own.”

Pointing to successful recovery efforts of the nene and the recent introduction of bio-control agents to fight the erythrina gall wasp, Burney says he is hopeful but adds that more progress needs to be made in controlling invasive plants and animals. The big question, he says, is how invasive species will react to climate change.

Rapidly changing weather patterns and altered rainfall distribution will continue to be critical factors for conservation, agriculture, and ordinary life, Burney says. But he is not a proponent of ?freezing in the dark,? as he puts it. Instead, Burney favors progressive, pre-emptive measures to mitigate the effects of climate change.

?Conservation cannot be separated from larger, global issues,” Burney says. “?How are people going to get everything they want out of this planet?? is a huge philosophical, even theological question.?

Along with the threat of extinction, Burney expresses concern about rising sea levels and coastal issues.

?The land needs to be managed like an entire pie, not just around the edges like a donut,? Burney says.

He says provisions need to be made for coastal wetlands, pointing out the importance of approaching land management on the ahupuaa or watershed level.

Despite the enormous challenges facing Hawaii?s wilderness and environment, Burney remains optimistic. The alternative, he says, is extreme pessimism.

?If we don?t think we can deal with these problems, we won?t,” Burney says. “I am willing to work for it.? 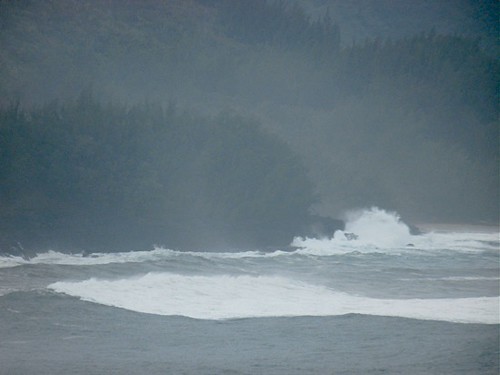 Building codes have emphasized wind and hurricane tolerance, but geologist and ocean researcher Chuck Blay sees a greater threat from a potential tsunami which could devastate coastal communities around Kauai. Photo by Jon Letman

Another Kauai-based scientist is Chuck Blay, a sedimentary geologist and educator who is well-known for documenting the geologic character of Kauai after he walked the perimeter of the island in 1986.

Blay is accustomed to examining changes over eons, not decades. He points out that while beaches take tens to hundreds of thousands of years to form, sea level rise, beach erosion, and reef degradation bring changes in centuries or even decades.

If climate change produces more frequent and intense storms, then coastal erosion, offshore loss of sand, and subsequent stronger rip tides like those which followed Hurricanes Iwa (1982) and Iniki (1992), could become more commonplace. However, based on historical records, Blay says there is a much greater probability of a large tsunami impacting the Hawaiian Islands in the next decade or two.

?Everyone was freaked out by Iwa and Iniki, but historically hurricanes have not been as frequent as major tsunamis over the last century. Hurricanes tend to lose energy as they move into northern latitudes. Plus they have a hard time hitting these islands which are just tiny dots in the middle of an ocean that takes up half the hemisphere of the planet,? Blay says.

Considering current building codes which place great emphasis on wind and hurricane tolerance, Blay urges builders, planners, and policy makers to give more consideration to the possibility of a major tsunami.

?The human species,? Blay says, ?is crisis-driven. We don?t take care of things until we really have to. Whether it’s conservation, peak oil, climate change or whatever, it?s that last-minute desire to avert coming catastrophe that often motivates people.?

And while Blay nor anyone else can predict natural disasters, he says it is highly probable that by 2020 there will be some sort of unpredictable global catastrophe that will make all other changes—both good and bad—seem insignificant.

Keone Kealoha is the executive director of Malama Kauai, a Kilauea-based nonprofit organization that encourages sustainable practices, relocalization, and the advancement of environmentally and socially responsible systems. Kealoha suggests that changes we make now, as a community, will minimize the adverse effects any such event could have at a later date.

The outlook of many top-tier economists is worrying Kealoha, he admits, but says that barring an unforeseen large-scale disaster, he is hopeful that at the end of the new decade people on Kauai will be living more in concert with locally available resources. He envisions the Kauai of 2020 as having a larger, better developed network of community-based resource management systems.

Kealoha points to the intersecting trajectories of diminishing natural resources, tighter controls of those resources through globalization and corporatization and the threat of climate change as creating a sense of urgency around the world. He sees one way to mitigate the impacts of any future collapse through organizing the public and recreating basic power structures.

The last decade?s dramatic advances in communications technology have made it possible for pockets of like-minded people, sometimes continents apart, to exchange knowledge and information in real time to effect change. Whether it?s resisting political ineffectiveness at a global climate change conference in Copenhagen, exposing police brutality in St. Paul or Tehran, or opposing an unwanted ferry in Nawiliwili Harbor, internet-based communications have enabled people to cooperate at a grassroots level like never before.

?The changes coming our way are going to be a lot bigger than we now realize,? Kealoha says. He asserts that the current model of government in the U.S. is essentially broke (and broken) and doesn?t believe government can live up to its potential good without changing policies that impede the flow of financial and human resources to where they are most effective.

?Ultimately I see people being the agent of change with the government falling in line behind the people,? Kealoha says.

?We are going to see big chunks of the system chip off. If we have trusting community relationships and places for knowledge transfer already in place, it will be much easier to weather big system breakage, whether this means shortages of food, energy, housing materials, or other essential resources.?

We are already living in a state of emergency, Kealoha says, but don?t realize it because things haven?t stopped yet. He points to the unsustainability of our current food import model saying, ?Not everybody is going to be able to eat strawberries and blueberries whenever they want.? 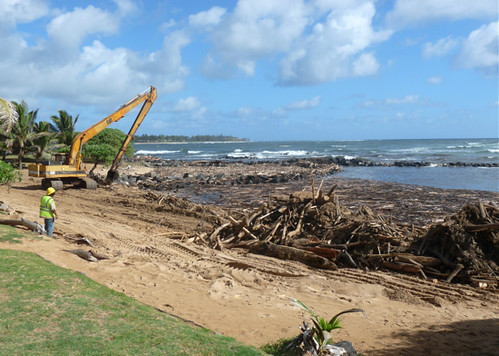 Clean-up crews work to remove debris at Lydgate Beach Park on Kauai’s east side after heavy rain flooded parts of Kauai. Scientists say a pattern of drier winters punctuated by periodic extreme rain events are one symptom of climate change in Hawaii. Photo by Jon Letman

By the end of the new decade, Kealoha envisions people on Kauai spending a lot more time in their local communities. People will likely work, socialize, and get food closer to home.

Kealoha wants to be part of helping people on Kauai make the transition to becoming more self-sufficient, better integrated with the natural environment, and better able to withstand any future storm whether it is of internal or external origin.

?Now we are at the point where we are seeing the effects of what happens when we don?t take care of that which takes care of us,? Kealoha says. ?Kauai is absolutely sustainable. We have all the resources here, but we are not currently managing them to fully realize all the island has to offer. We?ve applied a Western economic model over the top of what this place truly is—the mountains, the water, the soil—but ultimately nature will always prevail.?

The system Kauai operates under now, as Kealoha sees it, is flawed. He says the current political-economic model is based on accumulation and making ?the bottom line.?

?I?m focused on building networks and models that work within the current framework as viable and inspiring choices that can also weather any worst-case scenario,? Kealoha says.

He urges people on Kauai to make these shifts now while the changes are fun and exciting: ?It feels good to take control over your own destiny. It?s exciting to build a system of self-determination that offers a degree of personal sovereignty. ... If our systems collapse, these are the solutions we are going to have to find anyway. If we do it now, we?re going to be that much further ahead.?