KAIMUKI—The search for an authentic Mexican cuisine in Honolulu can be a journey fraught with frustration and disappointment. As San Diego natives, my husband Ian and I have a high standard for Mexican food and have yet to find a place in town that fully satisfies our craving for a good Mexican restaurant. But we continue to search.

Having recently heard good things about one particular Mexican food joint in Kaimuki, we decided to give it a try. 11th Avenue Mexican Grill, also known as Mexitlan Grill, opened up about six months ago in the 11th Avenue Atrium, sandwiched between Hog Island BBQ and Bella Mia, in the former location of SIS Kitchen.

On a recent Monday night, the small and welcoming restaurant, decorated with Mexican prayer flags, modern Mexican murals, and brightly painted walls, was a cheerful respite from the usual Monday routine.

Upon being seated we were immediately served complimentary warm chips and salsa, something we take for granted in California but is all too often an extra charge in Hawaii. The salsa had serious personality.  There was a nice char to it, the tomatoes having clearly been roasted to bring out their natural sweetness while achieving a hint of smokiness. The resulting flavor had depth and heat, but was not so spicy that you couldn’t taste the subtleties. This is good salsa, so good that Ian asked if they sold it by the quart to go.

This initial taste of 11th Avenue Mexican Grill suggested great things were in store for us. Unfortunately, the salsa ultimately proved to be the highlight of the meal.

The menu offered a lot of choice, perhaps too much to achieve uniform quality. Appetizers, which run from $7.50 to $9.50, included both your usual nachos and more inventive dishes like Cacao Mole Wings. Ian and I tend to judge the quality of food at a Mexican restaurant by our assessments of their basics—salsa, tortillas, and beans—and their salsa had already passed with flying colors.

Guacamole is another favorite dish essential to a good cantina, so we chose that for our starter.  11th Avenue Mexican Grill offers a made-to-order version for $7.50. When it arrived it looked anemic, more yellow-grey than green. I asked our server if the avocados were local, but he did not know and did not offer to ask; I’m guessing not, as each bite was stringy, watery, and tasteless. We left much of it behind, something that usually never happens with guacamole. 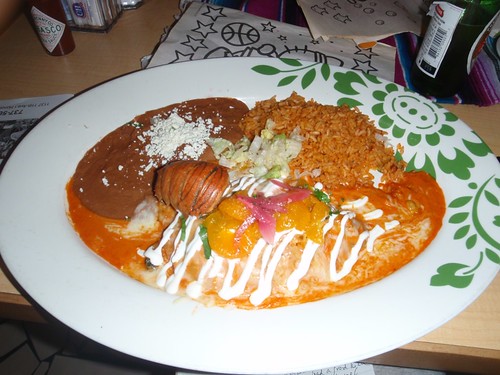 For a main course I selected the Supreme Chile Relleno ($16.95), which was stuffed with lobster in addition to the usual cheese, providing an interesting twist on the Mexican classic. Often the downfall of of chile rellenos is that they are too greasy. 11th Avenue Mexican Grill’s version was undeniably rich without being heavy or soggy. The creamy sauce was tasty and nuanced, if a bit salty, and mandarin orange segments added a nice touch.

Like nearly all their main dishes, it was accompanied by rice and beans. The rice was a tad under done. And the beans were only a shade better than Rosarita beans from a can. A shame, since beans done well can really make a meal.

Ian is a “wet” burrito connoisseur who likes his food spicy, and was therefore happy to see that 11th Avenue Mexican Grill offered ten varieties of wet burritos on its menu. He asked the server which one would pack the most heat, who in turn suggested the Bandera ($10.95), a wet burrito loaded with thinly sliced rib eye and a host of accompaniments. 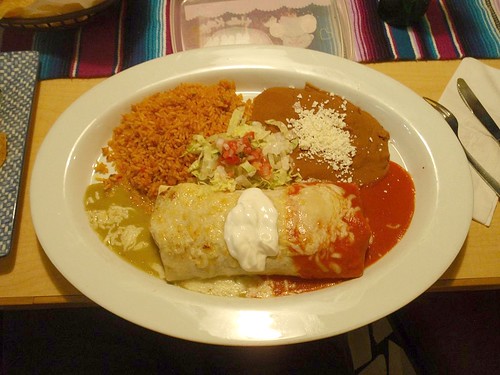 Compared to the chile relleno, the Bandera burrito was a bland disappointment despite its colorful verde and rojo sauces. Oddly enough, however, the guacamole inside the burrito was much better than the made-to-order version we received as an appetizer. (According to our server, the brighter color was due to the omission of lime, but my own guacamole preparation experience would suggest otherwise.)

Mexican restaurants are usually good selections for dining with small children, who tend to like plain quesadillas or simple burritos. 11th Avenue Mexican Grill offers neither a kids menu nor seems willing to modify adult versions of their dishes to please kids’ palates. When I asked if my daughter could have a plain bean and cheese burrito, the server gave me a confused “that’s-not-on-the-menu” look. After a brief back-and-forth, I ended up ordering the kids each a side of beans and a side of tortillas. A kids menu would be a welcome addition to the menu.

For now, our quest for the perfect Mexican restaurant continues.